If the agonising wait for the release of Trials Rising is leaving you twitchy, the latest effort from Milkbag Games (Photobomb, Sidewords) will most certainly fill that void. Fashioned as a futuristic trial-and-error stunt-racer, FutureGrind may not do much to reinvent the genre, but it is an enticing and ludicrously addictive entry into an under-served gaming niche.

Gameplay is simple to dive into but tough to master; players are tasked with riding a snazzy Tron-esque light cycle along a track consisting of coloured rails. The added hook? Your bike’s wheels are also coloured, and you can only ride on rails which match the colour of your landing wheel, while performing leaps and passing through special zones will allow you to change a wheel’s colour to your benefit. Touch the wrong rail and you’ll crash and burn, sending you all the way back to the start of the track.

If that might sound like it’s giving even Trials a run for its demanding money, be aware that FutureGrind is nowhere near as punishing as any of the Trials games. For starters, success is predicated more on memorising the tracks – which last only around 45-60 seconds each – than performing hand-cramping feats of dexterity, and restarts are thankfully instantaneous. Furthermore, the controls are extremely responsive and “fair” whether you’re playing with mouse and keyboard or a controller, lacking the floatiness that some precision platformers employ in order to further ramp up the difficulty.

Above all else, this isn’t a game trying to be “the Dark Souls of stunt racers”; it is clearly designed with accessibility in mind, as evidenced by the inclusion of an assist mode which allows players to ride whichever rails they wish and drop the speed down to as low as 50%. Milkbag also deserves praise for including a colourblind mode, allowing players to set a colour scheme which best suits their needs. 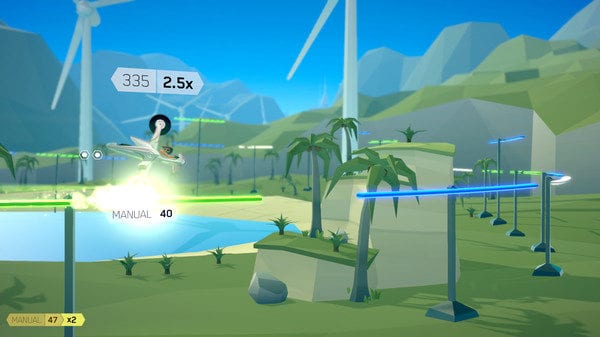 Options are always a good thing, and given how hairy some of the later levels can get – especially if you’re trying to hoover up every last one of the game’s challenges – this is a neat, unobtrusive way to open things up to a wider audience.

FutureGrind isn’t without challenge, for sure, but it’s an altogether more relaxing experience than much of its genre brethren, encouraging players to experiment with stunts in the stead of racking up the highest score possible. Even once you’ve spent 4-5 hours bossing your way through the 30 levels on offer, the addition of trophies and online leaderboards creates a compulsive loop of replayability, even if the package ultimately isn’t teeming with as much content as you’d find in a typical Trials game.

Also, the fact that the game’s fairly stock collection of challenges – such as avoiding certain coloured rails and pulling off various acrobatic feats – can only be unlocked one at a time feels like a rather transparent, restrictive attempt to pad out the game’s play-time. Granted, the chicanery required to clear even a single objective is usually plenty for a single run, but players should have the option to attempt them all simultaneously if they’re nutty enough. Thankfully this is such an effortlessly replayable game that it’s not really a big deal.

All things considered, there are ample opportunities for Milkbag to patch in more tracks with a greater sense of diversity, the ability to switch between bikes and, optimistically, some sort of multiplayer mode and perhaps even a level creator. Judging the game as-is, though, there’s still enough here to keep players coming back and justifying that totally reasonable £14.99 price tag. 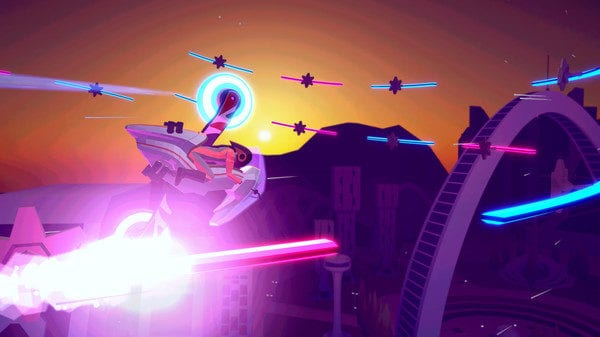 Visually FutureGrind is a good deal better-looking than it probably needed to be to succeed. Played at 4K resolution, the various bikes on offer look both gorgeously sleek and distinct despite the game’s fairly minimalist approach to textures and art design. There’s nothing here to knock your socks off, but it looks shiny and, most importantly for games of this ilk, the performance was buttery smooth for the entirety of my playthrough.

Menus are meanwhile intuitive and easy to manoeuver around, allowing you to quickly skip past the frankly inconsequential text messages you’ll receive from sponsors before tackling a new track. Aurally, bignic’s electronic score pretty much delivers what’s expected – an energetic soundscape that mercifully avoids venturing into overbearing dubstep territory.

FutureGrind doesn’t quite feel like a game that fully realises its potential, but this is more often than not a highly entertaining and fiendishly addictive sports title that absolutely deserves the attention of both Trials fans and those turned off by that franchise’s strident commitment to torturing its player-base. 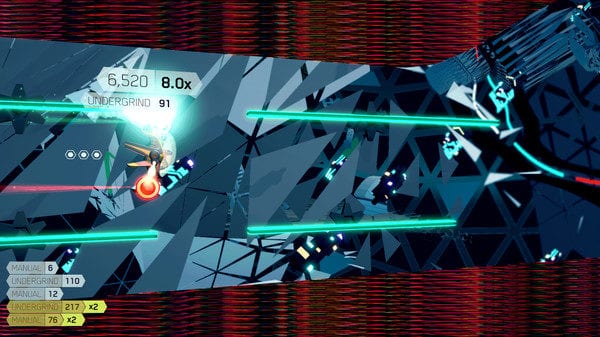 Reviewed on PC (also available for PS4 and Nintendo Switch).