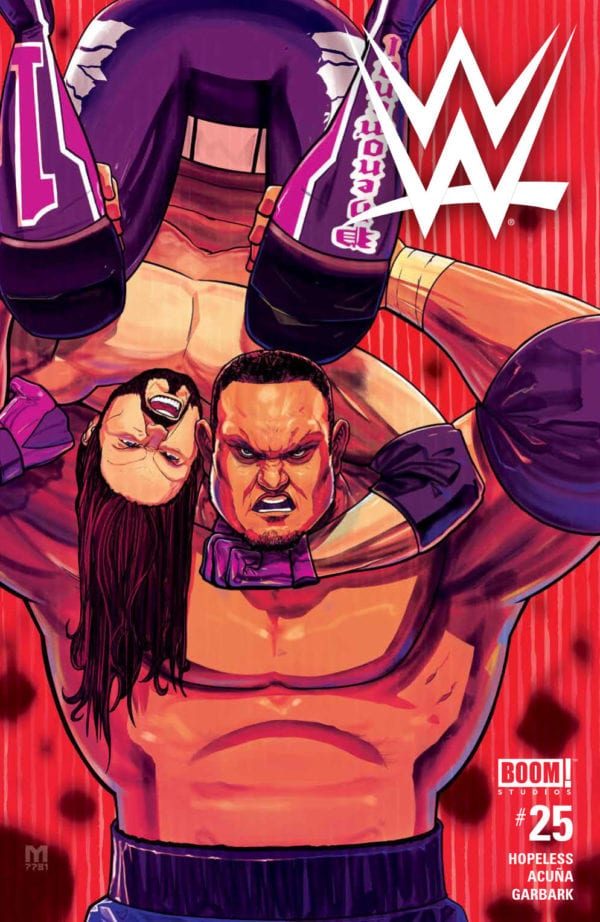 AJ Styles’ feud with Samoa Joe was one of the hottest feuds in the WWE last Summer, and Boom! Studios have done an excellent job at bringing that tale to life in what is their final issue documenting Styles’ run as WWE Champion.

Samoa Joe was at his twisted best last year as he tormented AJ Styles by constantly making their feud personal and bringing Styles’ wife and children into the mix, and series writer, Dennis Hopeless, does an excellent job at bringing Joe’s despicable character to life in the pages of this edition.

Boom! Studios’ WWE run has often been at its best when it has taken advantage of the medium and mixed kayfabe with reality in a way that WWE television could never do, and this edition is one of the finest examples of that.

Hopeless makes the decision to make Styles’ family characters in this story, and we slowly get to see the effect that Joe’s torment is not only having on them, but also on Styles’ own mental well-being. The pages where Styles is sat at home questioning his decisions with his wife are some of the edition’s best, and they really help add a little more drama to the already tense proceedings taking place on SmackDown.

Needless to say, series regular, Serg Acuna also does an excellent job of bringing the duo’s excellent trilogy of matches to life here as well. He even manages to do a better job of making the Hell in a Cell finish look much more effective than it did on television.

This edition wraps up AJ Style’s story with style, and while it would have been nice to have seen Styles losing the belt to Daniel Bryan, and Bryan’s subsequent rise to the biggest heel in the WWE in the coming issues, this is still an excellent addition to Boom! Studios’ WWE canon.