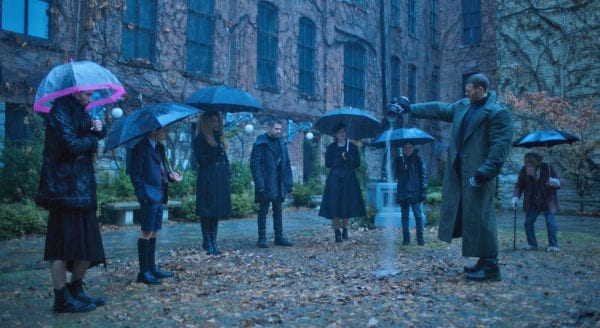 I get what you mean. It’s like he resents them for squandering their potential. I remember that dysfunctional element being a key aspect of the graphic novels.

Do you think it’s especially rewarding getting to explore something like in a TV show, where you’ve got more time to sink your teeth into character development?

You know, I actually hadn’t thought about it like that. But yes, there’s a lot more time to breathe and let the characters grow. In TV you have to figure out the nuances, because instead of getting ten scenes you’re having 65 of them.

I’ll tell you this much, when we started, it really worked. Because we [the cast] didn’t know each other and were thrown into rehearsals for about two weeks. So, there was already a sense of estrangement. By the time we got to episode ten, we had become a family and you can see it on screen. We knew each other. We knew our quirks.  You can see how much we’ve bonded by the end.

That’s the best thing because, in my opinion, that represents the arc of the season. These people have to find a way to fix themselves, so they can come together and save the world.

That’s interesting. What you’re saying is that, by going through the same team-bonding experience as the characters, it felt more natural for you as a performer?

Yeah! I mean, at the time of the pilot, they haven’t seen each other in thirteen years. It kind of fed into that.

One of your character’s defining attributes is that he’s really skilled with knives. Did you have to undergo any specific training for this, in addition to the usual physical prep?

Definitely. Before we started shooting, they set me up with some sessions. We would throw these rubber knives at first, because obviously we don’t want to hurl real metal around. They showed me how to use them, how to throw them, and how carrying them would affect Diego’s movements. But once we were shooting, the knives were real! Like when you see it, those aren’t rubber knives!

Oh yeah absolutely! I mean, we had to make sure that I knew where my lane was and that nobody was in the way. And even when I didn’t have to use them, it was important that they were real so I could gauge the weight.

I had to be aware where I was walking as well- even between takes- because they’re so sharp. I did pass by a few cast members and I would unintentionally poke them! [Laughs] So I had to be fully aware at all times about that stuff. 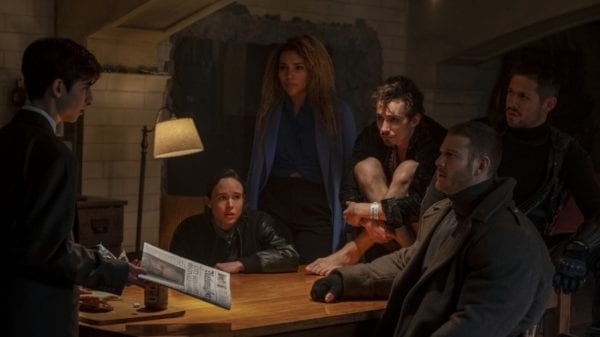 On the subject of carrying around those knives, did you have much of a say when it came to the character’s look?

Yeah, they were very open to my opinions on that. Although I was more focused on what the costume felt like, rather than what it looked like. Because Steve had his own vision and I was game for it. For me it was more about things like: ‘’How is the harness? Does it feel right? Is it easy to draw knives from?’’

So yeah, I did have some say, but at the end of the day I really wanted to see what they had in mind.

The thing about the Umbrella Academy is that it looks and feels very, very different to all of the other superhero properties  out there. Speaking of which, I was wondering where you think this fits into our current culture?

It’s unique. I think that a lot of these characters don’t want to be superheroes. They were forced into this life by their father and pretty much treated as lab rats. When you look at something like X-Men – which I love – they have a safe haven. We, on the other hand, don’t want to go to our academy. Yet we feel some responsibility to go to our father’s funeral anyway and that kind of jump-starts everything. Like I said, it’s more about how these characters were abused as children and how that translates into them being adults.

Is that something that’s challenging to pull off as a performer? Having to draw upon memories of a fictional childhood?

You need to find parallels in your own life, you know? I mean, I had a very healthy upbringing, but I just had to look for smaller details. Whether it was me getting bullied at school, or just seeing what’s going on in the news right now. Then I used that to get into a certain headspace. Obviously, this is very touchy subject, so I wanted to do it justice.

You mentioned earlier that, when it comes to portraying comic-book characters, there’s often a sense of pressure to be authentic and faithful to the source. But as you said, this is a much younger series and there’s less of an established canon.

Having said that, are there any significant differences between your iteration of the character and the original? Or is it quite consistent?

There are a lot of similarities. For example, one thing that the comic kind of plays with a little is the question of why Diego even stays with his family. If he resents them that much and he doesn’t respect them, then why does he stick around? There must be a reason and I think it’s because he does love them. That’s one thing that I tried to tap into and [expand upon].

Also, I’m still yet to read Hotel Oblivion (the upcoming third volume), so I’ll be curious to see where Diego goes there.

To round things off, what thing are you most excited for audiences to see?

They won’t know where to place it. It’s a superhero genre piece but there are also comedic elements, dark undertones, aspects of melodrama. It has a little bit of everything for everyone. Which means you’re gonna have people connecting to different characters. Someone might relate more to Alison, or to Diego, or to Klaus, or to Luther and they’re going to follow their storylines on a very personal level.

I hope that’s what they take out of it anyway. The fact that they can see themselves in these heroes.

Awesome. Well thank you very much for doing this and I’m really looking forward to show.

Thank you so much man!

The Umbrella Academy premieres on Netflix on February 15th

Many thanks to David Castañeda for taking the time for this interview.