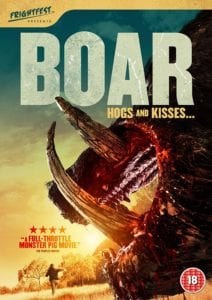 A giant wild pig roams the Outback killing everyone it comes across.

B-movie creature features are two-a-penny these days, what with cheap CGI technology and the ability to make a movie with nothing more than a camera phone and half an idea, but somewhere between the too-self-aware-for-its-own-good nonsense of Sharknado and the bigger budget polished studio fare like Kong: Skull Island there dwells the likes of Boar, and you can pretty much guess what this one is about.

In fact, you can pretty much guess how the whole movie plays out as Boar doesn’t deviate from your standard monster/slasher movie structure in the slightest, which doesn’t necessarily have to be a bad thing if you can pepper your story with interesting or fun characters and Boar, despite having a few problems, does at least have that going for it. One quick scan of the main cast reveals a few notable names – Bill Moseley (The Devil’s Rejects), Roger Ward (Turkey Shoot) and John Jarrett (Wolf Creek) all have genre cred and their presence is felt throughout the film, plus former wrestler Nathan Jones, Simone Buchanan (Patrick) and Ernie Dingo (Crocodile Dundee II) should be familiar faces to most audiences – and for the most part, despite the fact that the film really plays up the Australian stereotype of drunken yobbos with crappy old trucks and dirty fedora hats, these are a likeable and humorous bunch of reprobates to have to spend time with.

But we’re not here to go drinking with John Jarrett and Roger Ward (although that does look like fun) because there is a giant killer pig on the rampage, tearing down the fences of the local farms and helping itself to the livestock and any unfortunate campers that happen to be in the vicinity. Every killer animal movie lives or dies on how its monster is presented and the pig in Boar is crude and not exactly realistic but it fits the midnight movie vibe of the whole thing, and for most of the film it is a practical prop which is better than it being a CGI image on a green screen for the actors to try and react to – which would have tested Nathan Jones’ wrestling skills as at one point he goes mono e mono with the beast and could have looked disastrous if it wasn’t actually there – although as the movie goes on more and more CGI does creep in, resulting in a messy finale that is, quite frankly, a disappointment considering it was just about getting away with it up until that point with a few decent scenes of practical gore and some amusing CGI shots of the pig running with bodies in its mouth.

To be honest, there isn’t a lot to say about Boar that you cannot fathom out from the title and the synopsis – it is a movie about a giant killer pig running around the Outback; no more, no less. There are some lengthy scenes of character building that veer dangerously close to soap opera territory but they are really padding as without them the film would likely only come in at about an hour but the strong cast and solid performances make it all a pleasurable trip, although seeing Bill Moseley without any make-up on and playing it fairly straight does take a bit of getting used to. Nevertheless, Boar does what it needs to do without too much fanfare and you’ll either like it for the silly creature feature that it is or be totally indifferent towards it for not being as good as Jaws or King Kong. Either way, it is difficult to be too harsh towards it and if you are feeling a bit fruity you could always pair it up with The Meg for an evening’s worth of big dumb creature feature fun.