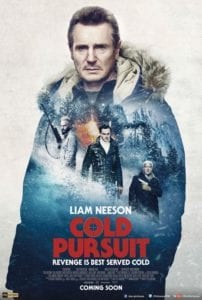 In a snowy tourist resort in the Rocky Mountains, quiet family-man and newly crowned ‘Citizen of the Year’, Nels Coxman (Liam Neeson), works his snow plow in order to keep the roads clear, maintaining order to ensure this small town community continues to thrive. His world is thrown into chaos when his son is brutally murdered by the local drug cartel, sparking a journey of  vengeance for the mild mannered senior citizen, and turning the snow a worrying shade of red. 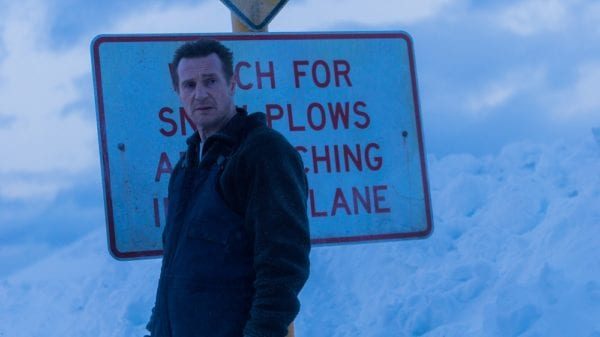 Before automatically deciding that you’ll wait for Cold Pursuit to appear on terrestrial TV in a Liam Neeson movie marathon, alongside some of his other lamentable action offerings – Unknown, Non-Stop, Taken 3, The Commuter – remember that the last time he appeared in a snow-set drama was 2011 film of the year contender, The Grey.  It’s also worth considering that Hans Petter Moland’s film is also a remake of his own critically acclaimed 2016 revenge thriller In Order of Disappearance, which deservedly sits at 85% on a certain fruit based reviews aggregating site.

So with that storm of caveats out of the way, it’s pleasing to report that while it’s not the most original film you’ll see this year, Cold Pursuit is a wickedly fun time at the cinema. Imagine taking a pinch of Martin McDonagh, adding a handful of Coen Brothers Lite, throwing it into a snow-globe and shaking it around for a couple of hours, and you’ll have an idea of the tracks you’re about to follow.

Ostensibly a Neeson vehicle, with the actor in genteel giant mode, that is when he isn’t offing people with his DIY sniper rifle, this is very much an ensemble piece, with characters flitting in-and-out of the narrative. Obviously this benefits the story in terms of diluting the array of larger caricatures, such as Tom Bateman’s deliciously vile Kingpin, who walks a fine line between menacing and intolerable, but it also means that the likes of Laura Dern, as Neeson’s pot-smoking wife, vanish from the film altogether.

Such a huge cast also facilitates the chaotically playful script, chock full of plenty of unexpected twists and turns, and the rather neat storytelling trick of having the increasing body-count punctuated with an onscreen title as an obituary for whoever’s face down in the snow. It’s worth darting your eyes around the screen for a few gems following the finale’s mountaintop showdown. It’s symptomatic of a film which is confident in striking a balance between bleakness and belly-laughs, a trick Cold Pursuit manages to pull-off more-often-than-not. 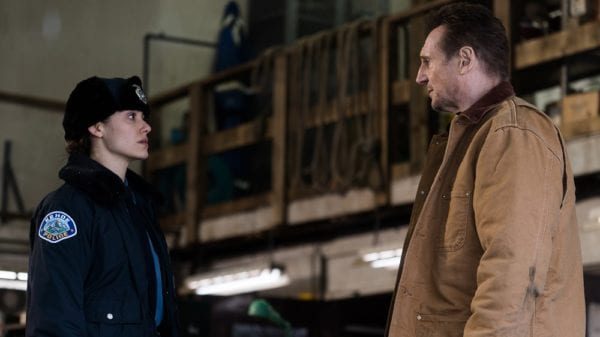 What you wont get from any of the characters is anything approaching depth; even Neeson’s driving thread of revenge is completely surface level. You’re given very little in the way of a relationship between him and his son, let alone Laura Dern, so as an audience you’re simply left with the baggage of a plot you’ve seen play out countless times before, as a replacement for anything akin to character development.

The peripheral actors suffer the same fate, with Emmy Rossum’s cop being little more than “rookie no.1”, John Doman riding along as her “grizzled partner”, and Michael Eklund as “drug lord’s eccentric footman”. They’re all respectively very good, but they have about as much backstory as the Guess Who? game-board. Having said that, there’s at least an admirable attempt to try something new with the thread involving Domenick Lombardozzi’s loyal henchman.

Admittedly, this pulpy, page turning approach just adds to the air of silliness that permeates the entire film, one which has it’s tongue frozen firmly in its cheek, and the barrel of a gun (you’ll see), but if you’re willing to embrace this sense of gratuitous fun, then Cold Pursuit is a real treat.