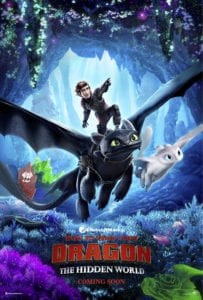 One of the major plot points of How to Train Your Dragon: The Hidden World (the third installment in the series, all of which have been written and directed by Dean DeBlois, based upon the books of the same name from Cressida Cowell) involves the domesticated, lovable, and adorable Night Fury dragon Toothless encountering the female counterpart to his species, a Light Fury. Naturally, he becomes lovestruck and places winning her heart above all else (and there’s a lot going on in this movie, although it is strongly balanced with every element working in tandem with one another to create something seamless and magical), but these dialogue-free segments of affection seeking are going to play out differently for a variety of audiences. Not to mention, they are the best scenes in the film.

For those not in the loop, the How to Train Your Dragon series has always been disability friendly, and as a disabled writer, it’s very easy to admire. Hiccup (once again slightly aged and voiced by a returning Jay Baruchel) has a prosthetic leg whereas Toothless has a broken tail that hinders much of his flying ability (all of this is a result of events in the first movie, but that doesn’t make it any less encouraging and empowering watching an animated franchise boasting disabled heroes). With that said, there’s something that resonated strongly and deeply to my very core watching the cutesy and charming scenes depicting Toothless’ numerous attempts at trying to prove his worth and earn reciprocated feelings (complete with Hiccup hidden in environmental backgrounds passing off suggestions like a true wingman).

To adults and especially children, it’s simply going to come off as the usual charming material presented in family-friendly films where a character seeks approval from another romantically, but to the disabled, it (possibly unintentionally or maybe I’m really reaching with my interpretation) organically comes across as our dating lives. The Light Fury seemingly enjoys his company, but also does not appear to be interested in him (basically, she disappears every time they come into contact, but not before staying a little longer every time as Toothless, madly in love, continuously tries new ways to woo her and show off some skills), yet Toothless is not deterred and keeps coming back ready to try again anyway.

Most people might think it’s not worth it, but to him it is. It’s worth it to Toothless so much that he wants Hiccup to develop new contractions to offset his flying disabilities (even though such devices are probably not comfortable) just because it might help him win her over. Hiccup himself notices and mentions that for the first time, Toothless has a reason to prove that he is more than a disabled (read: broken) dragon, because if there’s anything I’ve personally noticed, it’s that when it comes to desiring serious relationships, the disabled always have to exceed normal expectations and go above and beyond to dispel the stigma that they are not worth taking a chance on. So yes, that approximately 20-minute stretch during the middle is heart-piercing to a specific audience; it’s unbelievably relatable whether the filmmakers meant it that way or not.

Equally important to note is that no matter who you are, the scenes are arrestingly affecting due to the stunning animation that renders these facial expressions and gestures overflowing with personality and charisma. Sure, the action sequences contain levels of destruction so detailed there have to be thousands of pieces and objects flying around the screen at once (at times the film almost feels 3-D without actually being in 3-D) are nice, as is the tireless dedication to give every piece of animation its own identity (upon entering the titular Hidden World is a gorgeous moment where 50+ dragons or so disband and start flying off in different directions, none of which have copied and pasted movements, ultimately making for one impressive technical accomplishment alongside the aesthetic beauty of the caves underneath the waterfalls), but this movie properly functions as emotional and full of heart simply because we want these dragons to fall in love and be together, even if it means Hiccup might have to come to terms with the depressing reality of parting ways with an important friend.

How to Train Your Dragon: The Hidden World does touch on some familiar plot points of previous entries, as Hiccup once again is forced to realize he is a born leader and capable of accomplishing greatness no matter the circumstances, and although F. Murray Abraham is a delight as the stereotypical villain that is up to no good (he injects dragons with their own venom as a means to control them), his bad guy motives are certainly the weakest aspect of the movie. The good news is that the supporting cast (still containing a number of notable names that, by now, are far more famous than ever, consisting of Jonah Hill, Kristen Wiig, Kit Harington in what has to be is only good role aside from Jon Snow, and America Ferrera as Astrid, Hiccup’s loyal companion and flame). Cate Blanchett is wasted with a somewhat small role but for the most part, all characters new and old have spotlighted bits.

Again, the film also juggles a number of thoughtful themes regarding animal rescuing (apparently Hiccup and friends want to save as many dragons as possible but not before realizing that their homeland might not be suitable to serve as a home for that many, not to mention they are constantly being attacked by new enemies), Hiccup and Astrid potentially tying the knot, and parting ways with your best friend so they can be where they belong (thankfully, the script also doesn’t go the overly dramatic route of making Hiccup selfish and bitter over Toothless’ developing relationship). On top of that, the movie is consistently funny and accessible for all ages; the ending tugs at the heartstrings and adds the series to the list of trilogies you don’t want anyone to touch because you can’t imagine a more fitting and perfect conclusion. How to Train Your Dragon is the guidebook on how to do animated trilogies correctly.