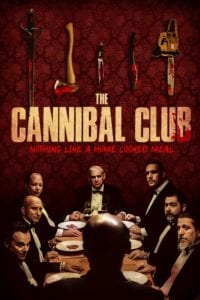 A wealthy Brazilian couple are members of a mysterious organisation devoted to the murder and consumption of those at the other end of the social hierarchy. 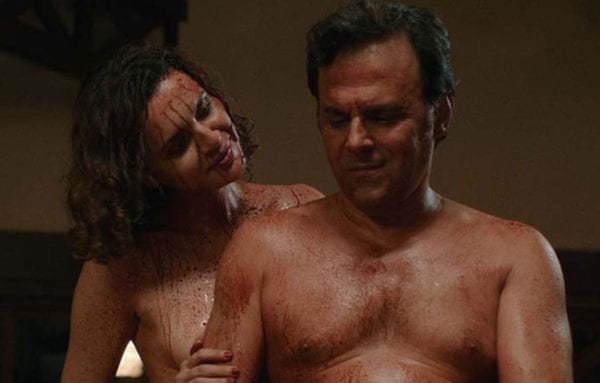 A title as outwardly trashy as The Cannibal Club suggests a certain kind of movie. There are echoes of the video nasty era work of Ruggero Deodato’s Cannibal Holocaust and its Euro exploitation sibling Cannibal Ferox. However, the new film from Brazilian writer-director Guto Parente is something entirely different. It’s not graphic shlock or exploitation – it’s a slickly made slice of social satire. Unfortunately, it simply doesn’t work.

Central couple Otavio (Tavinho Teixeira) and Gilda (Ana Luiza Rios) live in an opulent, secluded home that is introduced in a credits sequence that lingers on excess – an idyllic swimming pool and clean, modern abode. Otavio hands a pistol to the building’s caretaker in order to protect the house and declares that he’s going away on business. Before the audience can process this, the caretaker is in bed with Otavio’s wife and, seconds later, he has been slammed in the back with an axe. There’s blood and, to put it delicately, other bodily substances all over the floor. As statements of intent go, it’s a pretty grotesque one.

The problem comes from the fact that this statement of intent is not followed through. Instead, the plot sees Otavio put at odds with the titular organisation when Gilda makes a scandalous discovery about leader Borges (Pedro Domingues). Soon, the couple are upping their security and hiding, paranoid, in their home. It’s about structures of power and how fragile membership of such an exclusive inner circle (“distinctive men devoted to the highest principles”) can be. This is especially true when that inner circle has no problem with killing and eating people.

Parente’s film seems caught in conflict between its different ideas. It seems largely uninterested in the exploitation promised by its title, but also enjoys taking detours to wallow in handsomely shot, explicit sex and violence. At just over 80 minutes long, the story is too brief to ever fully explore any of its intriguing central ideas, dealing only in surface level observations about the status afforded to people by money and power. A scene in which a row of men in suits watch a violent, sexual performance without even a flicker of emotion is skin-crawling in a way that the movie lacks the depth to explore.

The performances are reasonably solid, with Rios in particular doing very good work as a woman dealing with the fact she’s always forced to the fringes of her high-class world by virtue of the fact she’s female. Teixeira, meanwhile, is strong as a loathsome, toxic figure preoccupied with satisfying his own macabre urges and maintaining his position within the structures of Brazilian society.

The film doesn’t spend enough time, however, examining its characters or their viewpoints. By the time it ends with another of Parente’s stylish, bloody tableaux, The Cannibal Club feels like something of a missed opportunity. It’s over too quickly to ever make any of the points it wants to make and isn’t ever clear on whether it wants to foreground its social commentary or its grotesque violence. The whole thing is too controlled and subdued to ever explode into the powerful project it should have been.