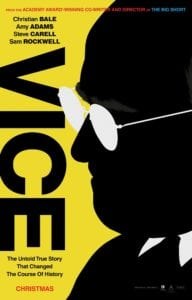 The tale of how former vice president Dick Cheney came from lowly dropout to become one of the most powerful men in the world. 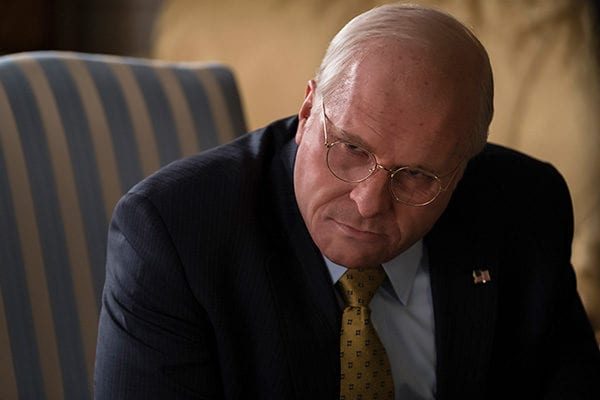 Vice, a tale that could’ve been sold as an underdog story if put into the wrong hands (‘watch as one man picks himself up after dropping out of that stuffy Yale, learns real lessons about real life and achieves his dream of working at the White House!’), is perhaps in Adam McKay’s hands a tale of a group of people who have convinced themselves they’re right.

Reportedly part of McKay’s ‘What the Fuck is Going On?’ trilogy, Vice follows Christian Bale’s Dick Cheney as he drinks himself silly, gets told off by his wife one last time and embarks on a career that will leave many hurt and damaged in profound and unsettling ways.

Vice is also one of those movies that is seemingly made for award-worthy acclaim for actors and crew alike. While the spotlight is on Bale and prosthetics, the entire cast produce good performances. Amy Adams could’ve possibly argued for a push for Best Actress in a Leading instead of Supporting Role if she was given a little more to do. Steve Carell’s brash and self-assured mentor-turned-conspirator could actually be someone you sympathise with, if he wasn’t eagerly complicit with the power-hungry madness that seems to consume many of the characters in the movie. Sam Rockwell, though, is wasted as George W. Bush. 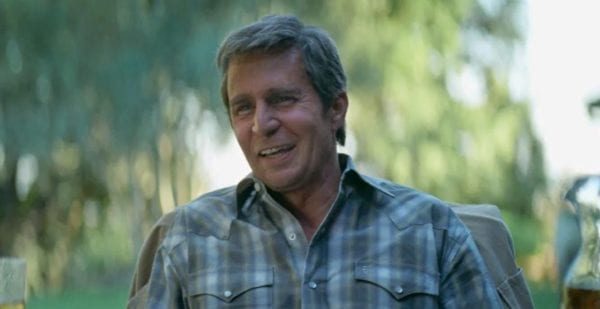 This is perhaps because, paradoxically, this is one of the few times Cheney has taken the spotlight from Bush with actions that leave only cynicism and helplessness in their wake, feelings that permeate through the room as it’s made clear throughout that these sorts of people have carved up and taken what they wanted before and they’ll do it again before long.

Bale does create a rather disconcerting, penguin-silhouette creating character, an unassuming man who simply listens and takes everything around him in before weighing up choices silently and making his move, knowing his move is ten ahead of everyone else’s.

A telling moment is a scene where Cheney takes in a briefing from his underlings, a joke is told by someone else and Cheney seemingly examines who’s laughing and who isn’t. It gives the feeling of being with a viper, a dangerous creature that can’t be read the same way humans read each other’s emotions, a creature whose motives are hidden behind eyes that see everything.

It’s not all doom and gloom, however, and the film brings wry laughter, including a hilarious fake ending, a waiter that offers several malicious political manoeuvres off a menu and a scene juxtaposing great Shakespearian drama with real life. 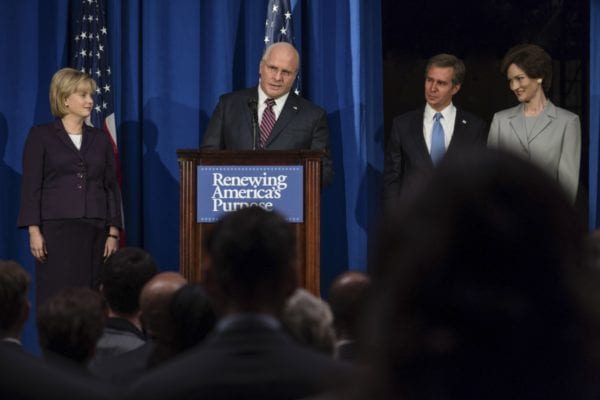 The DNA of Adam McKay’s previous film, The Big Short, is clearly evident. However, those hoping for something as funny or seemingly whip-smart might be let down. This isn’t a negative comment about Vice. It’s a reaction to a film that isn’t just about corporations taking money from millions, but is about that plus the willing murder and torture of thousands of innocent people. To be as droll or pithy as The Big Short would be perhaps denying the greater emotional impact that Vice has.

There is a danger of people reading the movie as Dick Cheney being knowingly responsible for the creation of ISIS. Though with America’s past dealings in the Middle East, the argument is also right in that he and his group of power scroungers should have seen something like that coming. How does someone who sees everything and is ten moves ahead not able to see what their actions will create. But do they care? It’s a movie that of course, with current political, shall we say, ‘controversies’ in America (racists, liars and thieves), has an emotional tie to the present.

There is something missing from the film. It does stray into the use of archetypes. Of course the louder, football shirt-wearing man is the republican. Of course the one wearing glasses and calmly arguing is the liberal. Is that too cynical a view? Cheney’s motives aren’t made explicit besides his want of absolute power. But why does he want it? It’s clear what his wife’s motivations are, but whether he shares the same feelings or if she’s an even more manipulative character than he is never made clear. A speech in the film’s final third, delivered to camera, gives a bit of an insight into character motivations, but the movie never gets completely under Cheney’s skin. 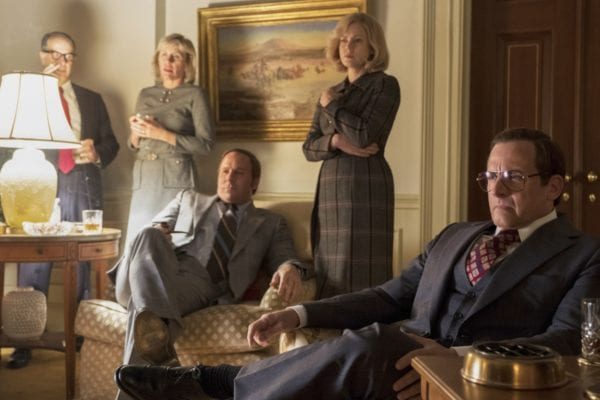 The message at the start of the movie tells us the film makers did their best to find as much of the truth as possible. But is that enough, if viewers aren’t able to see why Dick Cheney did what he did? It’s clear that Cheney would play his cards close to his chest and manipulate anyone regardless of who was in the room, be it his boss, members of the public or even the viewers. But why?

This is perhaps the key thing missing from the movie. There is the feeling of something substantial missing. Though is this character motivation? Or is it the tone the film finally settled on, a tone that seems to reach out from the screen itself and fill anyone watching with dread and a seemingly redundant anger? Maybe it is not missing something but instead takes something away.

Vice is perhaps a movie that, in the end, is weighed down by trying its best to tell the truth about a secretive, manipulative man who ruined the lives of many in order to consolidate a bit of extra power for himself. Does the emptiness created after watching it mean it should receive one less star from a movie reviewer? The cynic might point to the fact it’s a drama based on real life, with a lead actor changing themselves physically to ‘become’ the character. A film actively cultivating and hoping for award recognition. The optimist might say it is a movie trying its best in the system it was born from to tell the truth and draw attention to not just one man, but a system that is manipulated time and again for the gains of the few. If that’s the optimist’s view, then something is terribly, dreadfully wrong.