Martin Carr reviews the sixth episode of The Orville season 2… 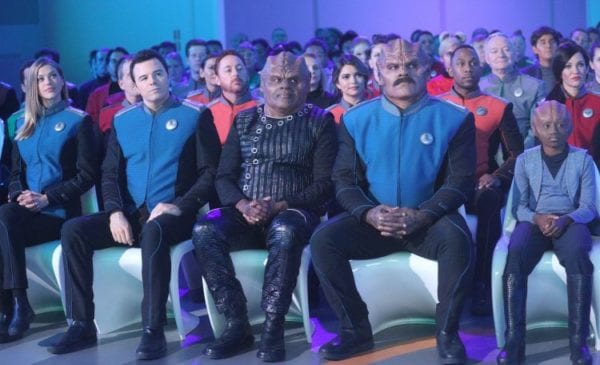 You could just look at this week as another exercise in relationship exploration as two people from diametrically apposed backgrounds are brought together. You might choose to go deeper and consider the concept of feelings and what makes us sentient, self-aware and therefore human. Then finally there is the hokey incurable romantic route which relies on simulated precipitation, classic movie music and old fashioned candle lit dinners. Thankfully for us Seth MacFarlane covers all three whilst giving his most complex character a broader understanding of human behaviour without compromises.

Isaac as portrayed by English actor Mark Jackson has had more than a few Next Generation comparisons levelled at him, but here he comes into his own opposite Penny Johnson Jerald. By using the primary objective of Isaac as a starting point for examining relationships MacFarlane instils both comedy and pathos through Isaac broadening his experience. From discussions around first date protocol and reacting accordingly to people in love, A Happy Refrain handles each moment with considered care but no rose tinted hue. By peppering scenes with water cooler gossip, locker room interactions and group ostracisation, everyone gets involved and offers up advice to both parties. 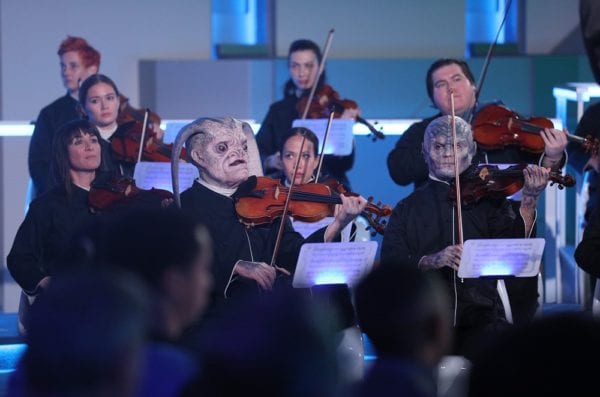 Any discussions had about this burgeoning relationship humanises Isaac despite his dispassionate, calculating and detached demeanour which goes some way to serving the drama. It is also worth noting that circumstances allow us to see the face of Mark Jackson for the first time bringing himself and Jerald closer still. An old British show called Red Dwarf did something similar with another character in one or two episodes, but that was never done for anything as emotive as we see here. Coupled with this are some subtle side jokes which are tenuously interlinked to break up the central narrative but never distract for too long. What MacFarlane continues to do with The Orville is build on our familiarity with these people, make us care and ultimately use that as a platform for an exploration of important issues. However for this week he has put his agenda to one side and focused on bringing two people together, whilst giving us a thoughtful, rounded and engaging look at how and why relationships work.

As we approach the midway point of this second season there is little evidence to suggest that a third run is not a foregone conclusion. If The Orville were said to have a formula for which the jury is still out, then depending on MacFarlane’s interest and that of all remaining principals, Fox could do worse than giving him the go ahead now.