Martin Carr reviews the eighth episode of The Orville season 2… 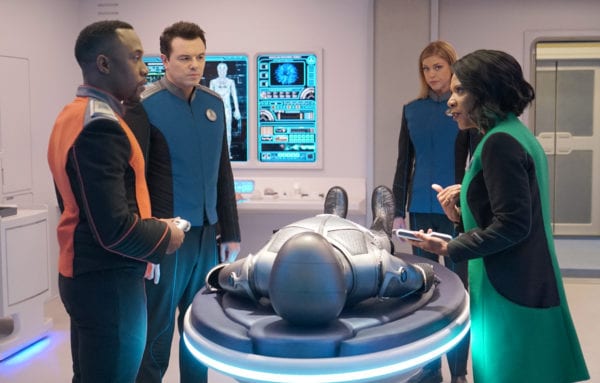 Drawing heavily from Fritz Lang’s Metropolis Seth MacFarlane introduces us to Kaylon this week as Isaac’s shut down forces an interplanetary visit. On the surface everything is clean lines, polished metal spires and automaton construction, stripped of emotion and driven by logic. Using the situation to extend a laurel branch of diplomacy Mercer and company soon find themselves in a different scenario all together.

As ever there are larger topics under discussion beneath the surface of Identity which are pulled kicking and screaming into the light. Survival of the fittest, sanctioned genocide and any subsequent moral quandaries all get examined. There is also the simpler point that focuses on how people are seen, who they really are and which face of the many we present to each other. By juxtaposing the complexity of human behaviour with Kaylon these writers are able to explore topics with more freedom and no chance of an on-line backlash. Religion, race and appearance are all taken out of the game leaving us all with simple sides to take. 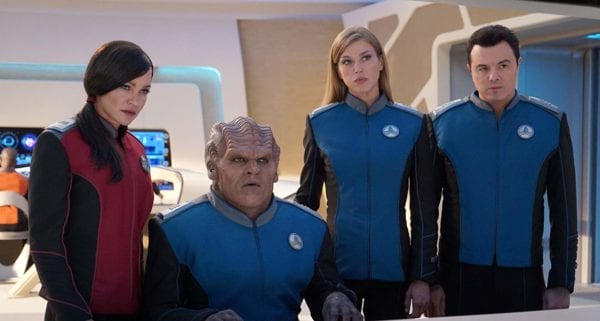 That humanity has been considered a threat throughout science fiction history both on television and in cinema has laid much of the groundwork here. Superiority in any sense gives no race the right to eradicate another often when the blinkered arrogance of some people gets clouded by ignorance as well. This is how wars start and countries descend into chaos or turn from democracy towards dictatorship in days. The Orville not only employs diplomacy when telling this story but has the guts to go full force in those sledge hammer moments.

Mark Jackson is pivotal in playing the middle ground here and drawing out emotive moments from a situation without ostracising himself from that core audience. Tonally everything from the farewell party to the family moments between Dr Finn’s boys and Isaac are balanced seamlessly. As we sit poised at a crucial juncture and this crew faces an almost insurmountable challenge, you have to wonder when The Orville will put a foot wrong.