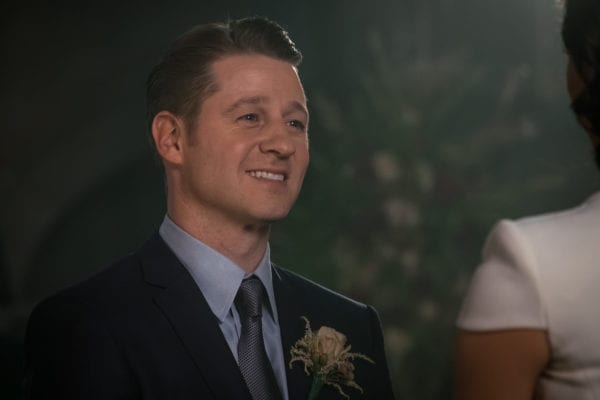 There is nothing more melodramatic than a dream sequence. Often perpetrated in flashes of extreme light and dark to highlight the otherworldly nature of events, they can be illuminating or pedestrian. Some films have done a good job of employing this as a story telling tactic, while fewer television shows have had the same success. For many viewers and the occasional writer they feel like cop outs to get round internal monologue and protagonist motivations on screen. However when done well they provide a bridge between dramatic events bringing characters together. In the main Gotham achieves this with only the occasional misstep.

As we come to the end of five years on this show everyone is looking for closure. So many situations Gordon deals with week on week defy description, logic and sheer common sense, yet this trial proves how pivotal he is in making things work. Outside of Jim Gordon’s subconscious other events remain inconsequential without his survival, whether that is Lea and Barbara at loggerheads, Victor and Ivy conspiring to take over the city or even Lucius and Ivy destabilising mainland reunification. 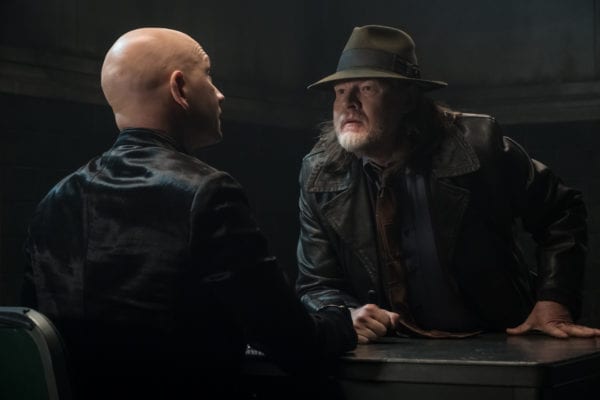 Episode nine is a showcase for Ben McKenzie as both persecuted, prosecutor and victim whilst out cold on a gurney. Cliches come thick and fast including smouldering burn victims on the jury, surreal wakes inside the GCPD and even full on electrocution to signify rebirth. McKenzie does well engaging the audience and other cast members clearly have fun, but The Trial of Jim Gordon suffers from style over substance. In the end it serves as a forty five minute exercise in closure complete with wedding nuptials, an assembled congregation and obligatory kiss between Bruce and Selena.

From a stylistic perspective this episode offers up everything from the surreal to the impressionistic in terms of lighting, camera angles and character examination without doing anything new. Nonetheless what Gotham does it continues doing well without pushing boundaries or offering up too many surprises. With only three more episodes left before completion I fully expect tonal changes aplenty week on week going forward.