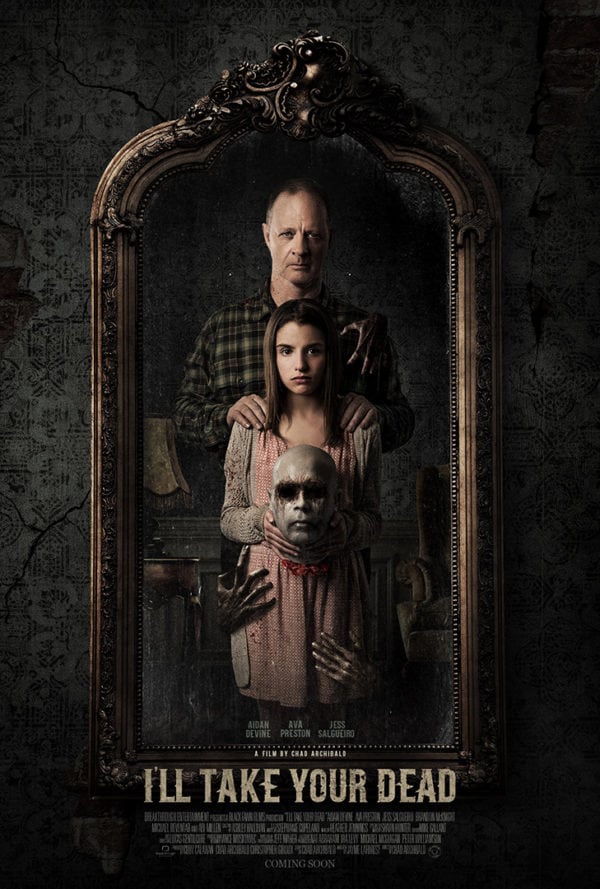 William has a simple job: he makes dead bodies disappear. Through circumstances out of his control, his little farm house in the country has become a dumping ground for the casualties of the gang related murders in the nearby city. After William patches up a mysterious wounded woman, her would-be murderers get word that she’s still alive and make a plan to finish what they started.

Black Fawn films’ latest outing I’ll Take Your Dead is a fun mix of a crime drama and supernatural horror that provides some pretty nice moments between its characters. Stars Aiden Devine and Ava Preston deliver the emotional heft of the film as the father and daughter pair of William and Gloria with Preston being the standout of the cast. Its a different type of film for Black Fawn and director Chad Archibald as its a bit lighter on the scares, but the story and strength of the cast make it a compelling film.

The story follows William, a farmer who has an unusual side job of disposing the bodies of murder victims. Raising his 12-year old daughter Gloria all by himself, William’s world gets a little complicated when one of the victims he’s given, a young woman named Jackie, is actually still alive. Not knowing what else to do with her, he and Gloria take care of her while William tries figuring out what to do should her would-be killers discover she’s not dead. All the while Gloria is seeing strange visions of some of their past ‘guests’.

Much of I’ll Take Your Dead rests on the shoulders of Devine and Preston who share a good connection as William and Gloria. Devine does a pretty good job of switching between a caring father figure with Preston and a cold, detached man doing what he needs to do when he’s opposite Jess Salgueiro, who plays Jackie. The contrast of his intimidating presence versus his more nurturing characteristics is played with so much that you’re left guessing which one is the real William throughout the film. It’s important to note, however, that even with his emotional detachment from what he does William still maintains (or tries to) a fairly strict code of the types of bodies he deals with and separates his actions from the gangsters that bring him bodies.

Salgueiro makes her own mark as Jackie as she attempts to understand the people holding her captive and how to escape. Her chemistry with both Devine and Preston is well done as she shifts back and forth between a fighter and a manipulative person as she tries earning Gloria’s friendship to her advantage. Jackie isn’t an entirely innocent figure herself and Salgueiro does well with this aspect of Jackie, making the audience never quite sure which side of the coin she’s actually on. The film makes a point of pitting her’s and William’s choices together and asking which of them might be morally better, the drug dealing gang-buster or the guy who only chops up dead bodies? They’re both doing what they do to protect their families and loved ones, but the story takes the time to examine the grey morality in their lives and where they personally draw the line.

The real standout, however, is Ava Preston. As Gloria she’s quirky, sassy and funny, yet can also be as emotionally detached as her father. Preston carries herself very well and at times seems older than she actually is with the ease she handles herself against Devine and Salgueiro. Gloria’s interesting because she clearly sides with her father on what he does and wants to remain detached herself, yet at the same time she yearns for a bit more of a connection with people and gets herself attached fairly quickly to Jackie. Preston’s delivery, whether its comedic or dramatic, is great and she does a fine job balancing those aspects of Gloria’s. She also never loses sight of the fact that this is a young girl who, despite how tough she acts around William and Jackie, can be frightened of things be it of her own body or the ghostly residents in their house.

I’ll Take Your Dead isn’t a straight-up ghost movie as more time is spent on the plot’s crime aspect, but there is some pretty creepy imagery throughout the film. Whether it is William cutting up bodies or Gloria seeing the spirits of the deceased, complete with the goriness of their death, the film doesn’t play around with the graphicness of William’s profession. While the supernatural elements are fairly low-key in the first half of the film, they really come into play in the story’s third act and are used to great effect in the climax’s tension. Even the film’s cinematography bolsters the creepy atmosphere with its use of lighting, exterior landscapes and focus on the characters during the emotional, quiet beats of the story.

Devine, Preston and Salgueiro make a pretty good team in I’ll Take Your Dead as Archibald focuses on the dramatic moments between them, but doesn’t lose sight of the shifting nature of their motivations. The supernatural aspect is an undercurrent throughout the story, but even when ghosts are not present it still feels creepy due to the performances of Devine and Preston as well as the overall feel of their house.