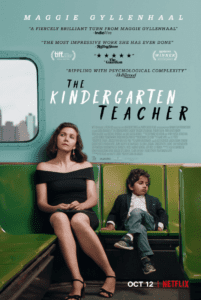 Lisa Spinelli (Maggie Gyllenhaal) is an unhappy kindergarten teacher in New York, who suddenly becomes obsessed with one of her students whom she believes is a child prodigy. 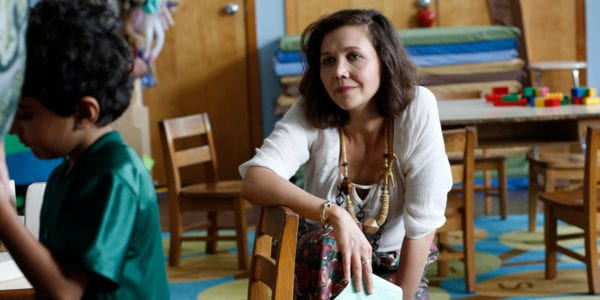 The Kindergarten Teacher is one of those films in which preconceptions are led down a dark, twisty path, to a destination you’re not entirely comfortable with, but you followed anyway because of the curiosity to be found in the increasingly unsettling arc of Maggie Gyllenhaal’s faultless performance. It’s not at all what you expect it to be, for better or worse, but this remake of 2014 Israeli drama Haganenet, is a captivating character study.

Immediately recognisible as the kind of figure such independent fare is built around, Gyllenhaal’s Lisa lives a life of dissatisfaction; her own children are at an age where her importance in their lives is barely acknowledged, she eats bland dinners with her husband, all orchestrated to the sound of stilted conversation, and worst of all for her is the fact she doesn’t have that inherent creative spark that she craves, with her poems labelled derivative by her teacher. Then one day she finds her mini-muse, in the form of the wide-eyed, quiet kid in her class, Jimmy (Parker Sevak), and it ignites something within her that threatens to completely destroy her life.

Veering from the kind of indie sensibilities you’d usually associate with a story of a 40-something living a life unfulfilled, coping with a relatable existential crisis, The Kindergarten Teacher slowly morphs into an unexpected physiological thriller. 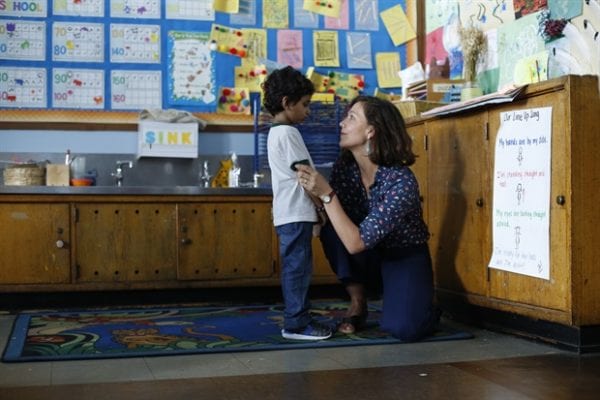 At the heart of the darkness are Gyllenhaal and Sevak, and both are brilliant. He perfectly portrays an innocent being manipulated by someone who should know better, with the film, among other things, being a damning indictment on the responsibilities of parenthood. It’s an extraordinary ‘wise beyond his years’ performance, one which feels so natural and unaware, and only exacerbates how painful it is to watch Gyllenhaal’s behavior; repeatedly waking him during nap time to tap his creative mind, all while the other student’s rest theirs, or taking him into the toilet so that they can discuss the perspectives of poetry.

Gyllenhaal anchors all of this weirdness by having you believe that the bohemian in her is motivated by a desire to nurture art, even if this means she initially plagiarises Jimmy’s poetry during some readings to her teacher (a restrained Gael García Bernal), you simply feel/hope that she’s just looking for some excitement in her mundane life.

Also working in the films favour is writer/director Sarah Colangelo’s decision to underplay everything. A lot of what happens is subtle and ambiguous, much like Gyllenhaal’s quiet performance, with the final beats played out in a devastating silence, rather than employing the kind of histrionics that the scenario could easily have afforded. 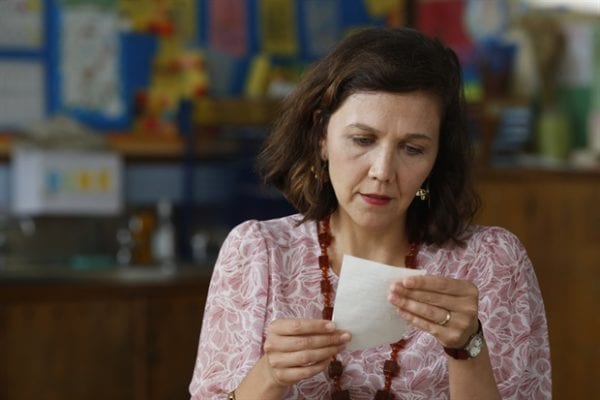 Worth watching for the captivating Gyllenhaal’s best performance since Secretary, The Kindergarten Teacher is an eerie film-going experience, one which might leave you as cold and disconnected as its lead character, but is also as complex and fascinating as her.