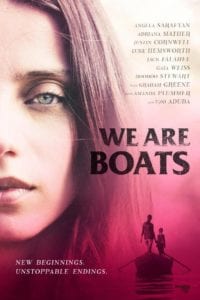 Francesca travels through the world of the living, encountering many strangers along the way. She either sends them on a path towards happiness or towards a tragic end. All of this while she attempts to connect with a loved one she never had the chance to give her final good-byes.

In the hands of most writers or directors, We Are Boats could’ve felt like a made-for-television film you’d find on Hallmark Channel. Thankfully filmmaker James Bird brings this elaborate story to life with a perfect mix of emotions and entertainment. That’s not to say We Are Boats is without any faults, but the end is so satisfying, and the journey along the way had enough twists to excuse any minor shortcomings.

The story of We Are Boats follows Francesca (Angela Sarafyan) as a guardian angel with the powers of a grim reaper. She’s searching for her conclusion in life while bumping into different people along the way, sometimes sending others on a better path or even ending their life. It’s hard to dive into many details without spoiling all of the emotional importance of the film, but each misfit Francesca runs into is changed by her, just as much as they add to her overall narrative.

Other than the actual movie itself, the production of We Are Boats is equally as unique. The film features a cast that’s 50% female and 41% people of color cast. The crew is also composed of 45% women. While that seems inconsequential to some, that’s almost unheard of in most Hollywood productions. It’s essential to note that a male director also chose to tackle such a diverse film; great to see as usually films about women or featuring so many women are generally only helmed by women. It’s great to see the positivity that beams from the film are also on the set of We Are Boats.

A strong cast that features Uzo Aduba from Orange Is The New Black elevates this material as well. Again the script and direction from James Bird are strong, but the cast working under him is just as strong. Unfamiliar with lead actress Angela Sarafyan before, she’s one to watch out for after this beautiful turn. Francesca is a complicated character, and Sarafyan brings something out of her that makes her feel so human. Some of the supporting characters don’t stand out as much as the strong leads though. That’s fine for most films, but with such a reliance on the people Francesca meets in her journey, it does disconnect me from We Are Boats at times.

The only other notable compliant to touch on is the overall look of the film. With such great work happening from the actors on camera, it’s a shame the cinematography feels slightly uninspired. Now and then, cinematographer Stefan Colson captured something on-screen that matched the work. Colson has a great eye and excited to see him refine it when he moves to bigger productions. There’s a market for his style in Hollywood. While it might not work for everyone, it never hinders the viewing of We Are Boats.

When it’s time to reflect on the films of 2019, it might be hard to find more movies with as much heart as this piece. There’s something so uncynical about the happiness the film strives for, and you genuinely feel these characters are well-intended even if they are a little lost in their way. That’s a great outlook to take away from We Are Boats: most people come from a place of good, even if they need a push in an unexpected direction. 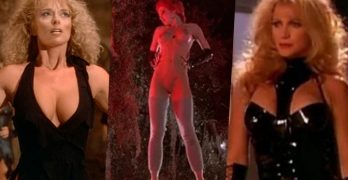