It’s nigh-on impossible for any ultra-violent top-down trial-and-error shooter not to be endlessly compared to Hotline Miami these days – especially when it’s also published by Devolver Digital. But beyond this superficial if not entirely insignificant similarity, Ape Out carves out a slickly singular identity that’s very much its own.

Agreeably thin on plot, the game simply pits the player as an imprisoned ape who is tasked with steamrolling his way to freedom, ripping apart as many meaty obstacles as possible in the process. Ape Out is a testament to basic mechanics executed so, so right; there’s little complexity here to master, with gameplay revolving around running, grabbing enemies, hurling them into walls and occasionally even using them as bullet-shields. That’s basically it.

And though the game’s core campaign – spread over four snazzily-styled “albums” – only clocks in at around two hours, it keeps up a pulse-poundingly urgent clip from first minute to last. In a neat wrinkle, levels are procedurally generated beyond the basic gist, which while occasionally infuriating when it results in four enemies spawning at the start of the level, is also a fun way to keep things feeling fresh. It might pain those who love to learn AI routes and master a concrete path, but there are other games for that. In another inspired move, each death screen shows players how far they made it through the level. Further to the game’s no-nonsense approach, there aren’t any of Hotline Miami‘s dubiously coherent story interludes, and aside from mid-album transitions from “Side A” to “Side B”, an entire block of levels unfolds in one seamless load. That’s the idea, anyway, but this being in the genre that it is, Ape Out will make you die. A lot.

Generally speaking, though, the difficulty level is much more generous than in other similar games; the simian protagonist can take three gunshots before dying, and a clear run of most levels can be carried out in far less than a minute. But enemy engagement ramps up as you progress, from simple rent-a-thugs to enemies with armour, sniper rifles, automatic weapons, flamethrowers and so on.

However, there’s mercifully zero obligation to clear the map of all enemies before reaching the end-point; you’re entirely free to slalom around alcoves where possible and evade wanton murder if you so choose. But with limb-ripping murder this gratifying, why the hell would you?

Those seeking a hairier challenge will marvel at the more punishing hard difficulty available for each album (which features a lot more enemies), not to mention the additional Arcade Mode, both of which can multiply the base play time out several times over. Considering this and the extremely fair price Devolver is selling the game for on launch, it’s hard to begrudge the short focal experience much at all. 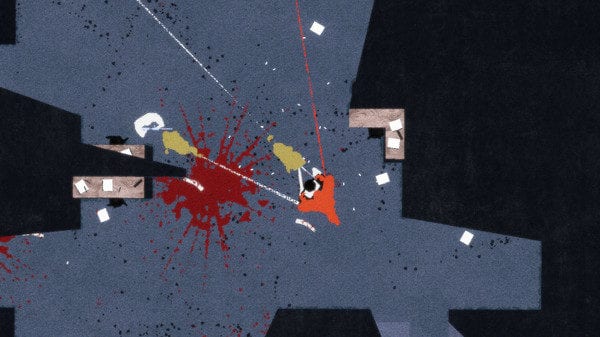 Beyond all this, arguably Ape Out‘s strongest asset is its style, which is the feature best distinguishing it from its genre brethren. The overall aesthetic proudly invokes legendary Hollywood graphic designer Saul Bass, with its bright colours, blocky objects and angular humanoid figures. In this stead it’s a refreshing shift away from the typically retro-styled visuals this genre tends to invite. Animation throughout is meanwhile gorgeously slick, and flinging goons into walls, rocks, other goons and even out of windows never begins to get old.

It helps that there’s a great level of artistic diversity between the four albums, with the fiery third album especially delineating itself from the prior lab and high-rise settings. In addition, some levels include sudden palette-shifts as lights are turned off and alarms blare out.

Even better than the striking visuals, however, is Matt Boch’s envelope-pushing musical score, which adopts an appealingly jarring jazz soundtrack which dynamically adjusts to whatever you’re doing. Murder scored to rolling drums is at least as awesome as it might seem, and the game does a wonderful job changing-up its soundscape throughout in order to avoid repetition.

If you’re in the market for a Hotline Miami-aping (sorry) romp that distinguishes itself with a confident attitude and beguiling style, this is an easy must-play. Ape Out is the Whiplash of gaming – jazz-as-ultra-violence and sure to be one of the year’s most brutally cathartic gaming experiences. Cons:
– Rather on the short side.
– Procedural generation occasionally frustrates.