It has been announced that several new titles are being added to the Xbox Games Pass in the next two weeks. 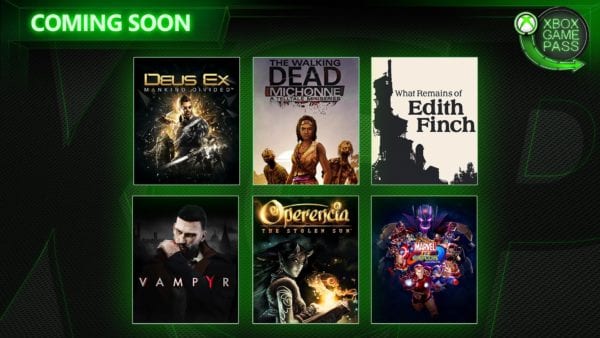 A total of six new games will be joining Microsoft’s subscription service by April 1st. The first two titles that will be coming out are Deus Ex: Mankind Divided and What Remains of Edith Finch, both games will be available tomorrow on March 21st. Mankind Divided is a sequel to the critically acclaimed Deus Ex: Human Revolution released in 2011 which continues the story of Adam Jensen, a cybernetically augmented Interpol agent, in the immersive action-RPG franchise. Alternatively, What Remains of Edith Finch is a shorter story driven adventure game that was released in 2017 to a positive reception and it also won the British Academy Games Award for Best Game in 2017.

March 28th will see a particularly undead themed line-up with The Walking Dead: Michonne and Vampyr being added to the Game Pass. The Walking Dead: Michonne tells the tale of the iconic Walking Dead character in the period of time she was missing from the TV series. The story is presented in a style that will be familiar to anyone that has played other entries in Telltale’s The Walking Dead story driven adventure series. Vampyr tells the story of Johnathon Reid, a World War One Veteran turned vampire, in post-war industrial London during the Spanish Flu epidemic. Vampyr has many unique gameplay mechanics that play into the games’ morality system of choosing whether to wreak havoc on the innocent denizens of the city or to spare them and become weaker as a result.

Operencia: The Stolen Sun will be available on its release date of March 29th for Games Pass owners. Operencia is a classic dungeon crawler with a turn-based combat system developed by Zen Studios which will be exclusively launched on the Xbox One.

Finally, Marvel vs. Capcom Infinite is going to arrive on April 1st. The crossover fighting game was released in 2017 and features both single player and multiplayer modes.

It was also announced last week that Minecraft will be added to the Games Pass on April 4th for the few dozen people who don’t already own it on at least one video game platform. If you’re interested in Game Pass your first month can be purchased for just a £1 and a free two-week trial is also available if any of the new entries are of particular interest.