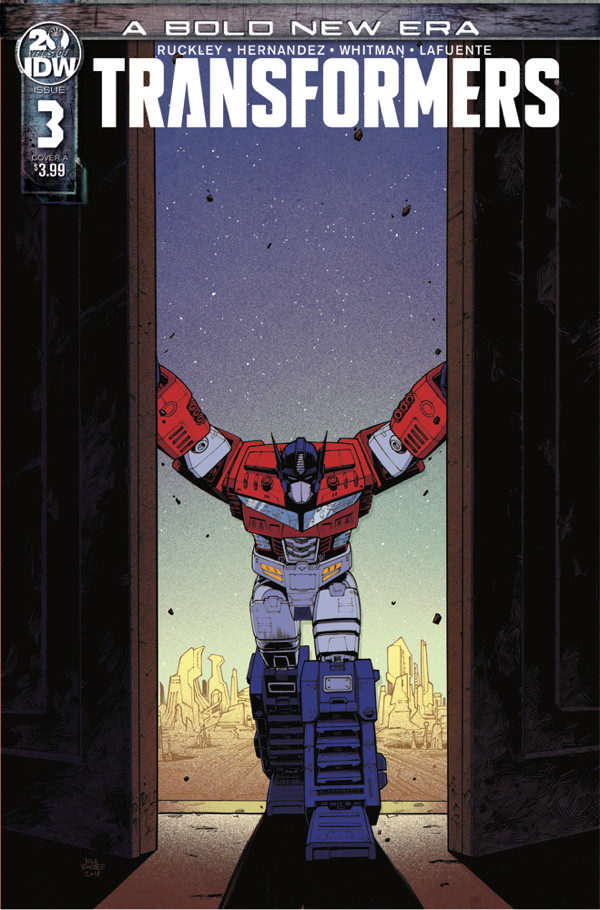 The central mystery of Brainstorm’s murder takes a backseat as Transformers #3 features a lot of exposition as other characters are introduced. There’s a lack of tension given the way the second issue ended with an apparent assassination attempt on Megatron’s life, but in place of that is more world-building from Brian Ruckley. Transformers #3 is not quite as compelling as it could be, but it’s still got some nice character moments and fairly good art.

The big criticism of Ruckey’s story here is the fact that there is not enough forward momentum for Rubble’s development, Windblade’s investigation into Brainstorm’s death or the assassination attempt on Megatron. The issue just remains mostly steady throughout with little in the way of excitement for the proceedings. Rather, Ruckley focuses more on the interactions between characters as well as some more information about Cybertron’s history as well as backstory for some characters. Quite a lot of exposition is presented, especially in the first few pages. It’s a fair bit to take in as the bots talk about new characters or elements to Cybertronian society as Rubble continues learning more about the planet and his place in it. Three issues in, though, and we don’t exactly know what The Rise is or why they’re such a troublesome group. The same can be said for Megatron’s cause and the Ascenticon movement as we still haven’t seen much of the social injustice he’s purportedly speaking against. The lack of plot progression is a bit of a trade-off since most of the character interactions and backstory are good and interesting, but exposition is a bit too much and nothing really happens from the start to end of the issue.

Much like the previous issues, Ruckley presents some aspects that could be foreshadowing or red herrings for the story down the line. From the inclusion of the massive Leviathan to the presence of a violent sociopath on Megatron’s new guard, Ruckley is certainly setting his pieces on the board. For instance, one interesting bit of dialogue Ruckley included – or, rather, excluded – was the identity of Froid’s other patient that he failed to help. However, Ruckely does set up the possibility that Megatron’s assassination attempt was planned by the bot himself. Hopefully that doesn’t come to pass as Megatron being the architect of the failed attempt in order to garner public sympathy is something we’ve seen from some other iterations of Megatron before, not to mention it would be a tad predictable. If this is the case, it has the potential to rob the soon-to-be Decepticon leader of some of the sympathy Ruckley is trying to make us feel towards his cause.

On the art front, Angel Hernandez and Cachet Whitman’s work is pretty good. Whitman, who only illustrates the beginning and end, does well with the detail on Orion and Megatron’s new guard while Hernandez does the rest of the issue. His artwork is good, though some bots like Orion and Prowl look too blocky in panels, though Bumblebee, Windblade and Chromia are pretty detailed in their appearances. Hernandez also introduces us to a new bot, Geomotus, whose design is fairly interesting. Joana Lafuente’s colours add to their artwork with some vibrant images of Cybertron’s landscape or the darkened alleys and streets of the planet. All three combined, the art in the issue is nice to look at.

Transformers #3 doesn’t progress the plot in any large way as Ruckley continues setting the board up, but some of the backstory and new characters he introduces are interesting if a bit much to get through. The art from Hernandez, Whitman and Lafuente is fairly detailed in their looks and movements. Hopefully we’ll get more information sooner than later on what is actually going on on Cybertron with The Rise and that Megatron’s motives aren’t so clear-cut and predictable just yet.