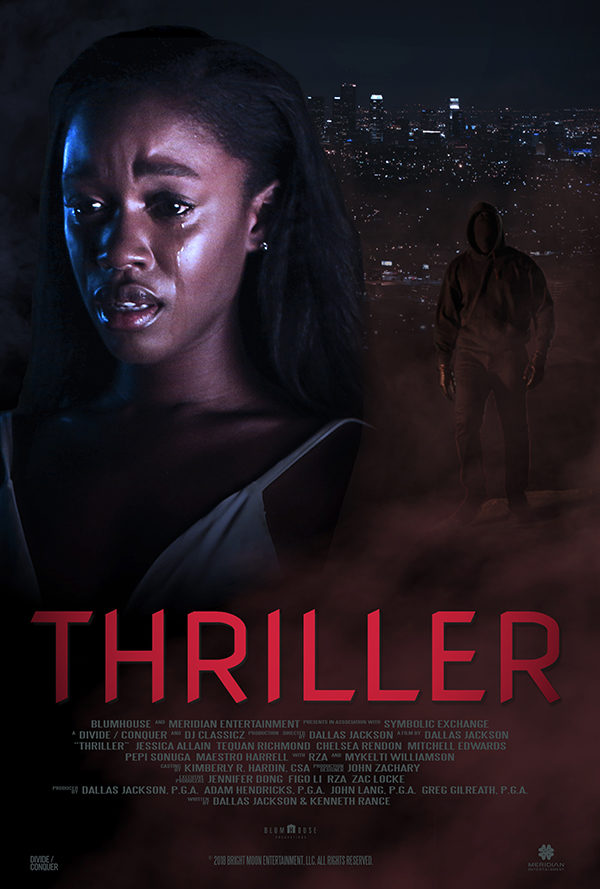 A childhood prank comes back to haunt a clique of South Central Los Angeles teens when their victim returns home during their high-school Homecoming weekend. 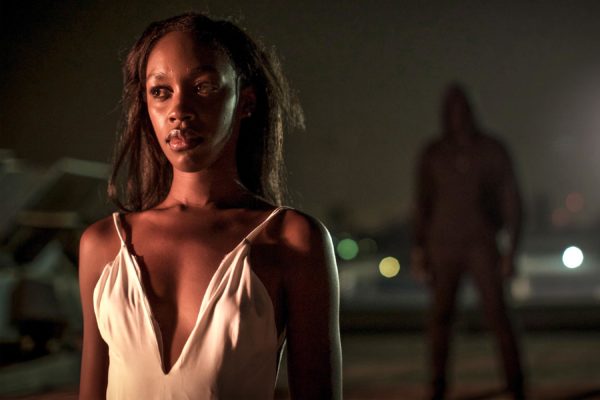 Dallas Jackson’s Thriller is the culturally characteristic slasher flavor Horror Noire: A History Of Black Horror’s call to action demands based on thematic perspective – but in terms of genre execution? South Central LA plays backdrop to a generic-at-fault teenage “killer out for revenge” flick that’s as introductory-level as they come. A childhood prank gone wrong, a hooded stalker, high school students picked off one-by-one: you’ve seen mirrored frameworks before and with meaner enthusiasm. It’s important that black cinema exists, specifically in horror, but quality and intent are two separate entities. While Thriller spotlights “hood life” challenges, trappings, and stereotypes against young black males with an emphasis on horror, it’s generalized simplicity is a forgettably bland game of cat and mouse.

To Lisa Walker (Jessica Allain) and her California “ghetto” friends, daily life is about survival. They’ve hardened after being harassed on the streets – maturing around gang violence and drug dealings – but after graduation, lucky escapees will find refuge in safer cities. The star wide receiver, the DJ, the kid from money – each child wishes to ditch Compton High School for a better life, but even that desire proves difficult amidst urban pitfalls. Doubly so if you and your friends sent a classmate to juvenile prison because of a hazing “joke” turned deadly, whose release coincides with Homecoming festivities. Can Lisa evade an unnamed killer, save her besties, and find herself on the way to college instead of zipped-up in a body bag?

At the film’s kickoff, we’re shown a flashback detailing how a sweet boy with a stutter – Chauncey (later played by Jason Woods) – not only became the victim of a failed “prank,” but found himself arrested. Lisa’s squad lures Chauncey into an abandoned house, scares him with skull masks, but as Chauncey flees across the home’s second-floor landing, he pushes one of his “attackers” over the railing. As the kids huddle around their dead friend/sister/girlfriend, they begin repeating a single phrase: “Chauncey did it.” Cut to Chauncey being roughly shoved into a police car, Det. Raymond Johnson (Mykelti Williamson) furious over his distaste for bullying and directing verbal scolds towards his underage perp since being sacrificially offered. Chauncey vows revenge, time jumps four years ahead, and Chauncey emerges from prison a hulking mass of muscles and steaming anger.

On the basest level of horror qualifications, Thriller is a Melatonin-drowsy affair that paces itself to delay excitement and action for too long. “Excitement” that of characters being yanked off-screen by black leather gloves, “action” that of a knife stab or two and some asphyxiation bullishness. Jackson’s shadowy figure – wearing Chauncey’s all-black sweats getup – does a lot of running after separated targets, who in turn do plenty of running away. Sneak, run, snatch or smash, cut to the next living character. Rinse and repeat this cycle as a means of avoiding special effects undertakings that might have livened up this stiff dead-by-daylight bore. Want to see a movie where the villain is marathon training for about 90 minutes? Look no further! 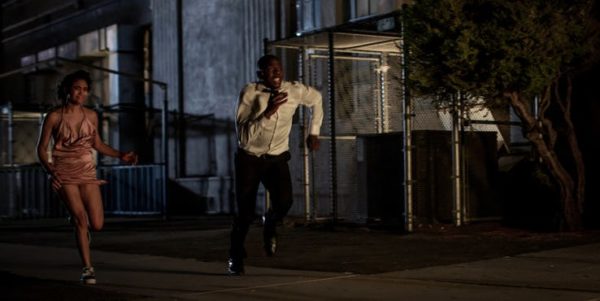 Jackson and co-writer Ken Rance struggle to craft characters who deserve our sympathy and investment. Each child a dull stereotype defined by inter-squad drama from girls cheating on their boyfriends to punkish alpha rivalries. Rampant disrespect paints multiple possible killers based on motive, but constant bickering and shoving matches and sabotage make this friend group more dysfunctional than a last-minute Maury Povich episode in the most abrasive way. Mind you; this is not a detriment due to experiences only relatable to specific audience demographics. We’re talking Andre (Tequan Richmond) instigating face-punches at random, Tiffany (Chelsea Rendon) flirting with Ronnie (Maestro Harrell) in front of boyfriend Eddie (Michael Ocampo), Gina’s (Paige Hurd) “hoodrat” hoochie coattails rider – personalities are primarily unlikable, and performances remain plainly cardboard. So now we’re at deflated energies and mid-level acting if you’re keeping score.

Thriller’s sharpest commentary comes as ex-military Principal Hurd (RZA) whoops Andre’s ass behind a locked office door. As Derrick (Luke Tennie) tells another teacher elsewhere, after being confronted over his failing grades, statistics do not favor young black men living in unforgiving neighborhoods. For how many children push to escape Compton High, others accept their doomed fate. Such tragic admissions based on nothing but geography and skin color, which adds a cultural sting to the ongoing massacre as teens die quicker than by gun-cocked curbside dealers you’ve double-crossed. These children are acclimated to facing adversity, which makes their reaction to what or whoever might be responsible for multiple deaths more interesting – fleeting, momentary genre thoughtfulness.

Digging deeper, Thriller doesn’t skimp on details but never ties everything together. Kim (Pepi Sonuga), for example, who – as a means on remembering her deceased sister – mimics Amani’s voice into the mirror all insane-asylum like. Ty (Mitchell Edwards) the superstar football player whose entire future rides on one final climactic game only to face halftime woes. These are, or we’re told they are, intriguing additives that might lead to greater madness after Chauncey’s either outed or proven innocent, only to become ultimately inconsequential in terms of overarching plot. Jackson keeps things detrimentally simple, which sticks out because nothing else draws focus away from the mundanities of 80s slasher reappropriation. School dances and home-alone parties ever the dullness horror should not be.

Thriller is next in what should be a long line of forthcoming black horror cinema, but it’s disappointingly not memorable or, pun aside, quite thrilling. Dallas Jackson’s directorial debut feels very every bit a novice production, missing tonal marks and allowing actors to never break into rigid and outlined roles. It’s an attack against bullying, plea for representation, and a hopeful eye-opener to underprivileged devastation – but the one thing it *isn’t* is a solid horror genre watch. Even knowing that’ll be nothing but a Lazy Sunday Netflix watch (since dropping onto the streaming platform’s service without warning), Thriller will make your brain scream for all the wrong reasons. Who would have thunk such a generically titled horror flick would end up being so self-fulfilling…well…generic?