This weekend has seen a lot of news coming out of Star Wars Celebration, first with the reveal for The Rise of Skywalker and the trailer for Star Wars: Jedi – Fall Order, but now we have a ton of new info on the comics side of the franchise. Marvel held a panel yesterday where they announced comic book writer Greg Pak (Action Comics) and artist Phil Noto (X-23) will be taking over the main series once Kieron Gillen’s run concludes. The panel also showed off a lot of previews for the covers and artwork of the various number of Star Wars comics that will be released between now and the end of the year. Both Pak and Noto have worked in the galaxy far, far away before. Pak has most recently written Marvel’s Age of Rebellion one shots while Noto has illustrated the miniseries Star Wars: Chewbacca as well as the covers for the main series. The duo will begin their tenure on Star Wars with Star Wars #68 in a story that builds off events hinted at in the opening crawl for The Empire Strikes Back. Princess Leia and Rebel command get word that Darth Vader has launched thousands of probe droids to find Luke Skywalker and the Rebels’ base. In an effort to counter their search, the Rebels begin an operation to lead the probes and the Empire away from Luke’s location.

“I am thrilled to be with Phil,” Pak said after the announcement. “Phil is going to be doing interiors, my friends. We’ve been seeing Phil Noto’s incredible covers for ages and now he’s doing interiors on this book. It’s insanely good. The basic storyline is, remember in the opening crawl of Empire how Darth Vader is searching for Luke Skywalker and he’s sending thousands of probes across the galaxy and we see only one probe? There are thousands of probes and the Rebels get word of this and they launch three desperate missions to intercept and thwart these probes and maybe trick the Empire into disaster. It’s this mad-dash scheme with three different crews of our heroes in unlikely pairings which was a ton of fun.” 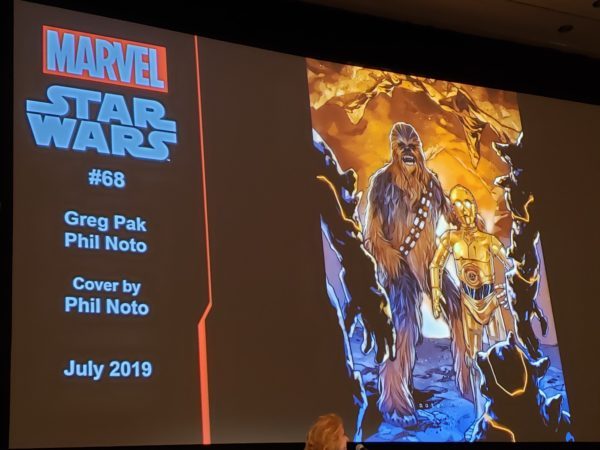 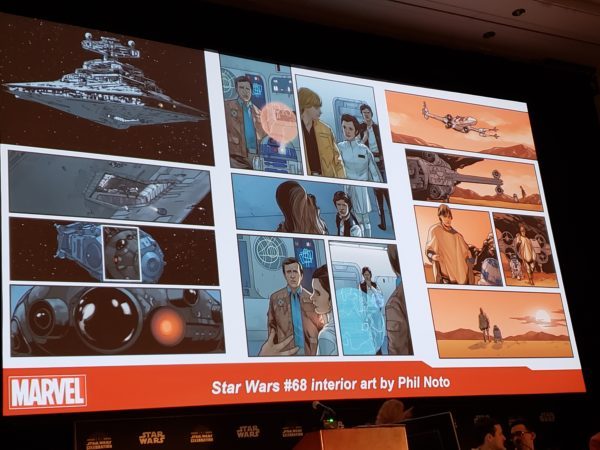 As for what faces Luke in this arc now that he’s wanted directly by Vader, Luke will find himself and R2-D2 trapped on a dangerous planet. “We’ve got a fun kind of Western theme going on with Luke here. He will end up meeting a interesting new character named Orba and she might be a grifter or she might be the real deal. She might actually be able to give him some training with the Force which he sort of desperately needs at this point in time.”

Han and Leia, meanwhile, get reluctantly stuck together and deal with a new thorn in their side in the form of a new character named Gar Champion, a district advocate of a planet Han and Leia visit. “I wanted to do kind of a noir story with the two of them,” Pak explained. “Something kind of sexy and mystery-laden. Gar has a previous relationship with one of our characters that will be explored in fun ways in the book. It’s basically a gangster story which is a lot of fun in the Star Wars world. Basically I try to write the Star Wars movie I would want to see. We’re going big, we’re doing all the biggest character things I can think of for that moment in time in the Star Wars universe.” As for Chewbacca and C-3P0, they are given a mission to blow a planet up, but complications arise. 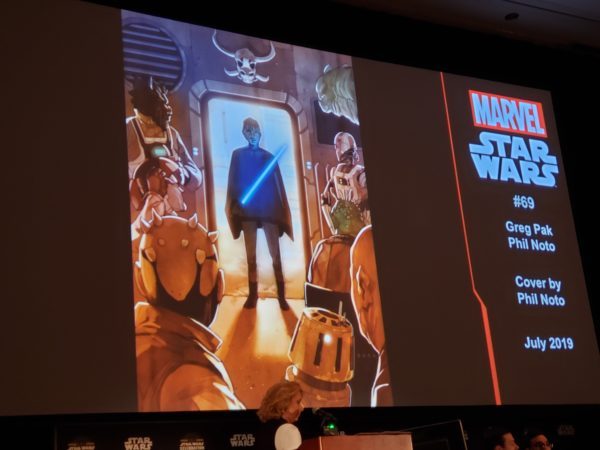 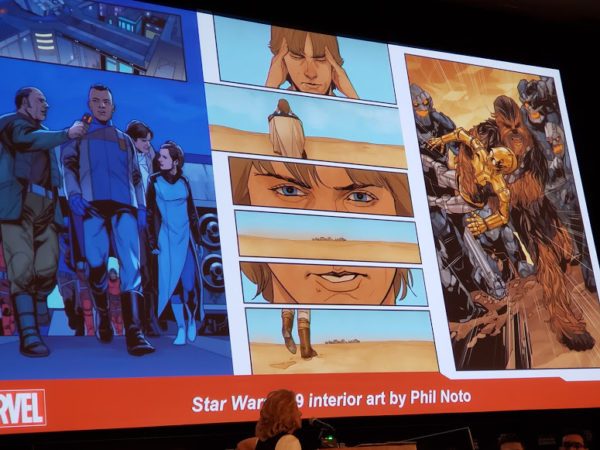 Before taking on the main title Pak will be wrapping up his Age of Rebellion series, a collection of one-shots focusing on many fan-favourite heroes and villains. Age of Rebellion – Han Solo will be released later this month, but the summer will see one-shots on Luke Skywalker, Boba Fett, Darth Vader and Lando Calrissian with Pak naming Boba Fett his personal favourite out of them. “I have a special affection right now for the Boba Fett one that just went to press. The art is by Mark Laming, who is just outstanding, and we did it as a straight Western. I think Boba Fett says three words during the whole thing. It’s kind of The Man with No Name mystery feel. Is he an anti-hero? Who knows?”

While the Age of Rebellion will come to an end in the summer, fans can look forward to more character one-shots as Marvel moves into the Sequel Trilogy era in Age of Resistance. Beginning in July with Age of Resistance – Finn, DCeased writer Tom Taylor will lead the series with art by Ramon Rasonos (Ant-Man) for the heroes and Leonard Kirk (Dark X-Men) for the villains. Finn will see the title character in his early days as a Stormtrooper within the First Order as well as his time as Starkiller Base’s janitor. The remaining titles will be Rey, Captain Phasma, Poe Dameron, General Hux and a special issue that will see Taylor, G. Willow Wilson, Chris Eliopoulis and Elsa Charretier explore the pasts of Maz Kanata, Admiral Holda and BB-8. 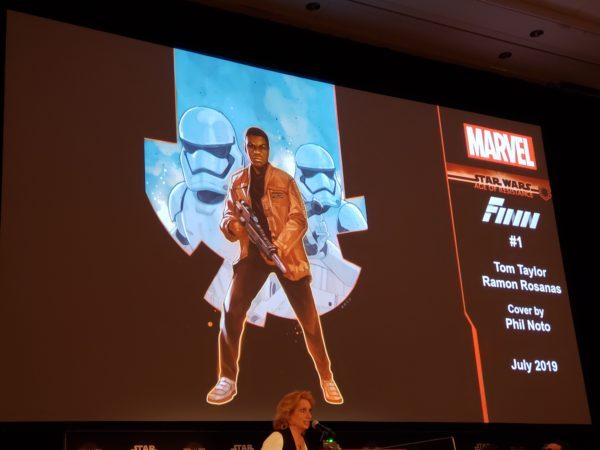 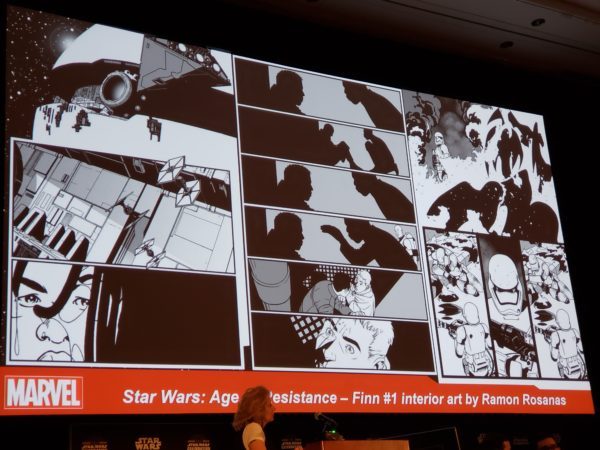 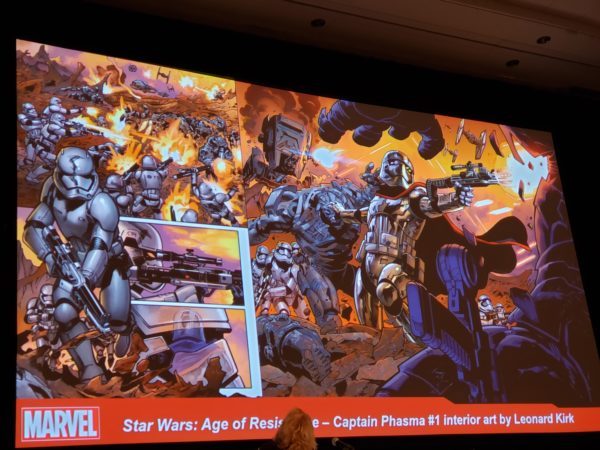 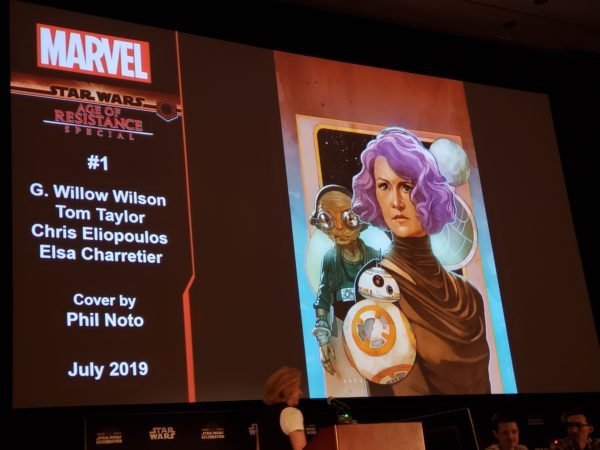 These will not be the only miniseries to launch during the summer, though, as Marvel will release a tie-in comic to one of Lucasfilm Publishing’s upcoming novels. Star Wars: Tie Fighter will take place before the events of Alexander Freed’s Star Wars: Alphabet Squadron, focusing on a team of TIE Fighter pilots called Scar Squadron that will be written by Age of Republic‘s Jody Hoser and art from Rose Antonio. “Alphabet Squadron is the story of a ragtag New Republic squad that forms shortly after the destruction of the second Death Star and they’re tasked with tracking down a really specific TIE Fighter group and this story is the flipped side of the coin where we get to see the origins of that TIE Fighter group,” said Lucasfilm Story Group’s Matt Martin. 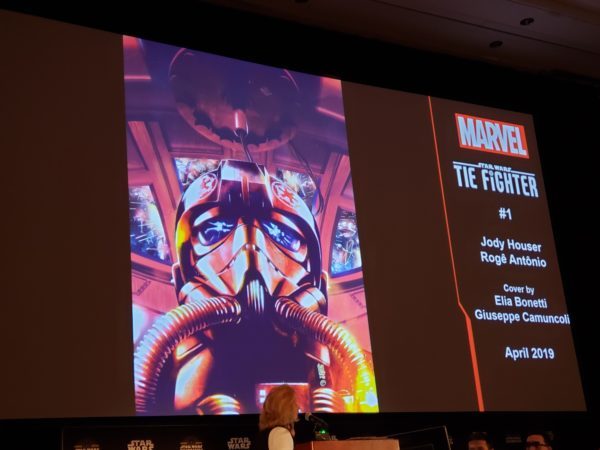 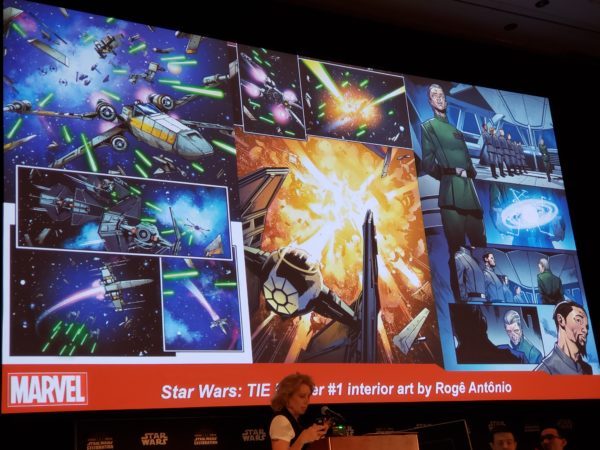 Additionally, fans will get their fix of Vader with Target Vader, a miniseries that will re-introduce a figure from the 80s era of Marvel Star Wars comics: Beilert Valance, a bounty hunter who has a grudge against the Dark Lord of the Sith. The series will hit shelves in July with Robbie Thompson writing and Marc Laming on art duties. “Target Vader is six issues starring a character that we’ve recently reintroduced named Valance,” said Assistant Editor Tom Groneman. “He originally appeared in Marvel Star Wars#16 as a cyborg bounty hunter with a vendetta against Lord Vader. It’s a deeper dive into the criminal underworld of the galaxy and it’s all about Valance and his crew of bounty hunters coming together to pull an impossible mission hunting down Dark Lord of the Sith.” 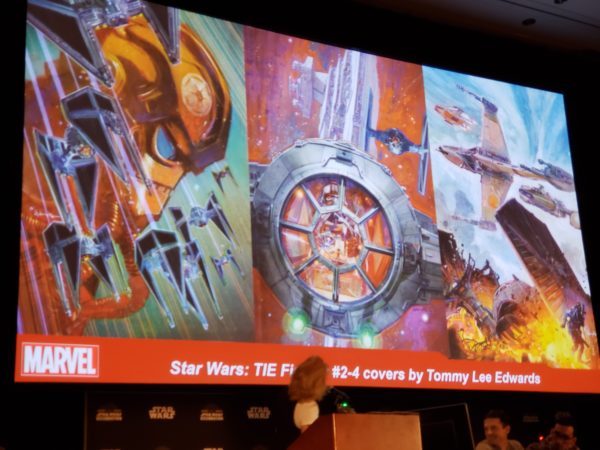 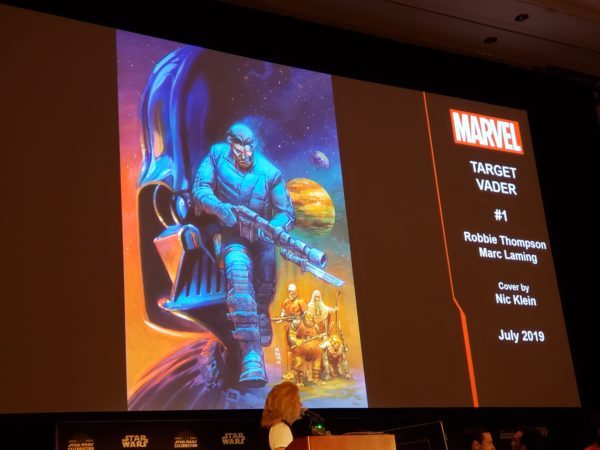 Apart from the release of The Rise of Skywalker at the end of the year, one element that fans have to look forward to is the opening of Disneyland’s Star Wars themed park, Galaxy’s Edge. To build up anticipation of the park, Marvel is publishing a Galaxy’s Edge miniseries from Star Wars Adventures‘ Ethan Sacks. “I’ve been waiting for this chance since I was four years old,” Sacks began. “It’s a five-issue miniseries. There is a criminal gang out to plot a heist for a specific object.”

The two-page spread of the town below is actually a layout of the park itself they were able to use for the comics. “We worked with Lucasfilm Story Group and Imagineering to study it,” Sacks explained. “That’s the layout of the park so a lot of what you see, the people and the settings and the aliens, are straight out of the park. It’s very authentic so for a lot of you will be able to see it before anyone else does.” While the first cover boasts Han Solo and Chewbacca, future covers for the series showed off Greedo, Hondo Ohnaka and Doctor Aphra visiting Galaxy’s Edge. 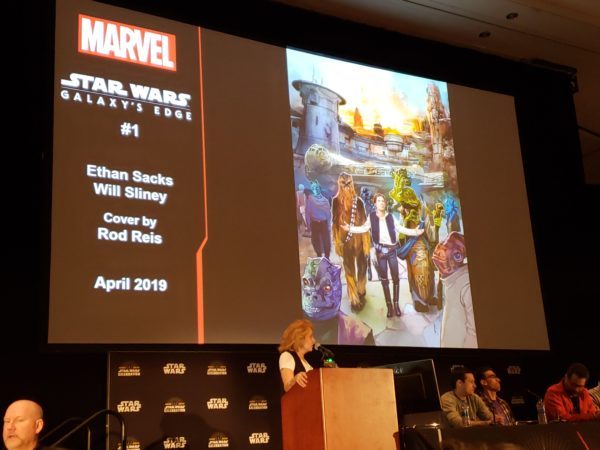 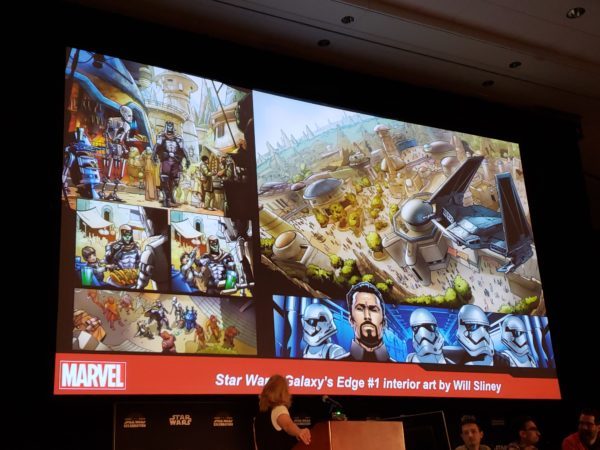 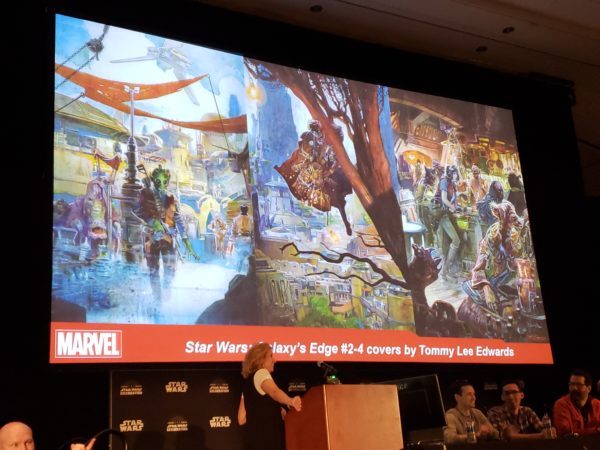 There are some pretty exciting times coming up for fans of Marvel’s Star Wars comics the all the announcements. What are you most excited for? Greg Pak and Phil Noto’s run on the main Star Wars comic or the various miniseries such as Age of Resistance and Galaxy’s Edge? Let us know in the comments below or tweet us @FlickeringMyth…