Jessie Robertson reviews the eighteenth episode of The Flash season 5… Tonight was my dream episode. I’ve long gushed this season over the endless delight Sarah Parker Kennedy has brought me as Nora Allen, and as we wind down for the season, she gets her own episode! And so, so necessary to go back and show exactly how she arrived under Thawne’s tutelage. I have to say off the top (probably due to my affinity for the character) Barry’s reaction is a large over-reaction which shows he was only thinking selfishly. We get it; Thawne killed his parents; he did unspeakable evil to his family. But, as Iris and some of the rest of Team Flash point out, hear your daughter’s story and listen to why she would reach out to this horrible person, even after she knew what he had done.

Now, her back story is fun, but not light. In 2049, after a rash of thefts of chemicals, she and her CSI lab partner Jane put together that after decades, there is a new speedster in Central City. Luckily, or maybe unluckily, depending on you look at it, we find out it’s Godspeed, a brand new character from DC’s Rebirth run from the last 2 years; an awesome looking character with great powers that they never go into. He’s basically a plot device to introduce and solidify Nora and Thawne’s relationship or mentorship I should say. He also looks fantastic on the show, if you can overlook his larger than normal codpiece! This is where we see Nora discover her mother implanted a chip that has inhibited her speed her whole life and we see that play out in an emotional but sort of ham fisted moment (complete with Iris’ terrible gray streaks). But, the lie Iris hands her plays directly against Nora’s lie to her parents in the past and Iris sees this immediately and frees her immediately from the pipeline.

The two main sticking points to me on this episode that really up the drama and intensity are Nora’s first meeting with Thawne and Barry leaving her in the future. Thawne, as a character, still commands the respect and fear that he has always carried and the way the scene was shot and the music accompanying the scene just all played into that. Nora’s face while walking into a room she was unfamiliar with and being wholly unprepared to deal with what she was about to face was played up perfectly. Fast forward to the end when Barry, in his own head, tries to accept Nora’s rationale but can’t, runs his daughter back to the future and warns her, like an angry parent that he’ll know if she tries to come back. It’s not an easy scene and I think what makes it all the better is he doesn’t show a bit of hesitation in his actions. Even after confronting Thawne, he doesn’t crack at all on basically ending his relationship with his daughter in a tough scene to really think back on. 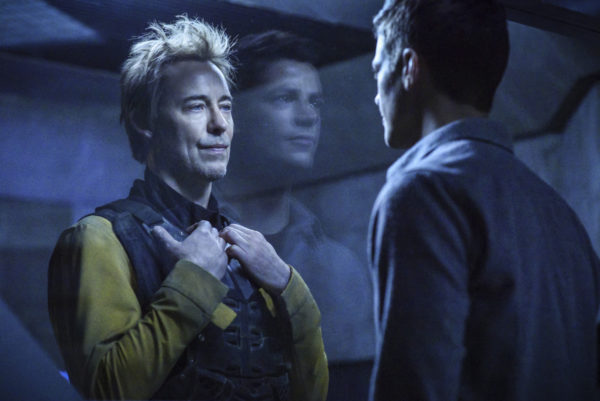 Rating – 8/10: A whole episode of Nora, Godspeed’s debut on The Flash and heavy dramatic consequences that mean something elevate this episode.