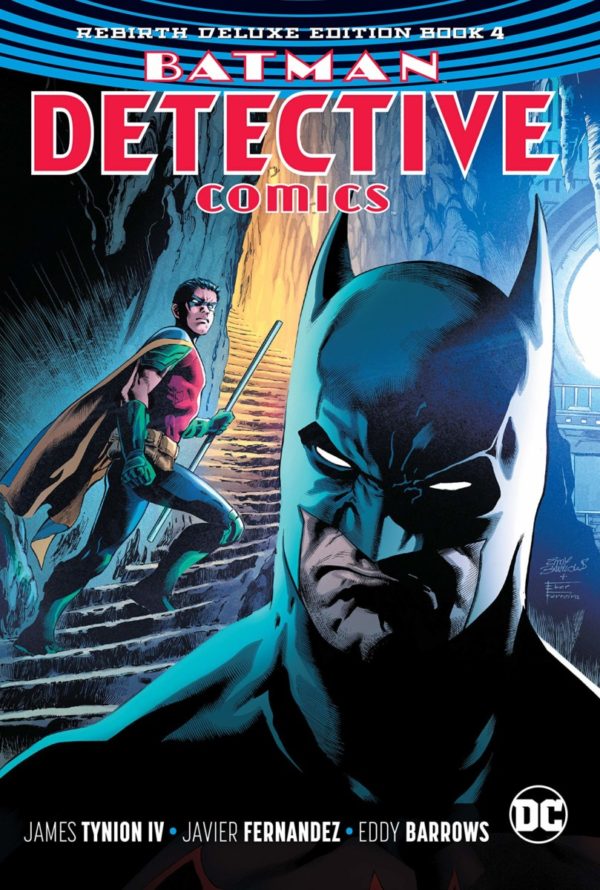 James Tynion IV’s long run on Detective Comics reaches its conclusion in Batman – Detective Comics: Rebirth Deluxe Edition Book 4. All loose ends and story threads are tied up as Tynion completes his examination of the Bat-family and just how far some of them are willing to go in order to protect Gotham City and the rest of the world. With some great characterization on Tim Drake and Batwoman alongside stellar artwork, this new deluxe collection is a nice cap on Tynion’s tale that will please most fans.

Unlike the previous Detective Comics Rebirth collections, the fourth book is pretty light in comparison as it only collects the final arc of Tynion’s Detective run plus a couple other issues. While it doesn’t offer much incentive for readers to double dip, the deluxe format is a great treat to read the stories here and enjoy the artwork. Picking up immediately where the previous collection left off, Batman and his team have to deal with the consequences of Batwoman’s decision to kill Clayface in order to save the city. It causes a split in their group where some believe Batwoman made a tough, but ultimately right, call while Batman and others believe there is never an excuse for killing. The division has an effect on everyone, but particularly Tim Drake and Cassandra Cain as they back away from contact with everyone else while an old enemy manipulates events to bring about the dystopian future Tim has feared.

Tynion writes a compelling story as all members of the Bat-family come under fire, but still doesn’t lose sight on the character’s journeys and emotions. Tynion places a lot of focus on the tension between Batman and Batwoman, but most of the story revolves around Tim’s obsession to avert a dark future and perfect crime fighting both in Gotham and around the world. Tynion continues his examination of just how alike he and Bruce are as he veers off the deep end to prevent as much crime as possible at the cost of his relationships. Fans of Tim will be pleased with how much he has to do in the story, even if he plays a more reluctant antagonistic to the team.

The rest of the cast get a lot of good development as well. Batman and Batwoman’s relationship is fleshed out nicely in conversations between themselves and what the core Bat-family thinks of her actions, particularly what Batgirl thinks Kate means to Bruce as one of the last connections he has to his mother. Spoiler and Cassandra are also given a lot of focus as Stephanie has to come to terms with both who Tim has become and who she was meant to be while Cassandra questions whether or not Kate, Batman or anyone else on the team will kill her for the greater good due to her dark history. For fans of the pre-New 52, there’s quite a bit involving Spoiler and Cassandra that will be enjoyed, especially towards the story’s conclusion. Tynion manages to wrap up a lot of his varying plot threads from the start of his run, such as Colonel Jacob Kane’s special Colony unit, Tim’s future aspirations and Cassandra’s place on the team in mostly satisfying ways. There are some threads which are wrap a little too neatly and place things back to the status quo, mostly involving Batwoman, but others open some interesting doors for the future.

The artwork throughout the book is top notch with a lot of detail. There are a lot of artists involved on the various issues. Eddy Barrows, Javier Fernandez, Alvaro Martinez, Eber Ferreira, Philippe Briones, Scot Eaton and more all provide pencil work while Brad Anderson, Allen Passalqua, John Kalisz, Adriano Lucas and Dave Stewart do colours. With so many different artists in a collection like this, you’d think there wouldn’t be a lot of consistency between all the artists but their styles are fairly similar and help the book keep the same tone and visual look throughout. The antagonist, though, slightly changes appearance based on the artist. In one story he almost looks like a young pre-teen, but aside from that the art team delivers some great visuals on the characters with their body language, facial expressions and the choreography in the action. Nothing ever feels confused or out of place during these easy-to-follow sequences, creating a nice flow from beat to beat. The deluxe format only helps the book’s quality as readers can really examine the artwork.

The book also features a collection of variant covers from the series and just a few behind the scene pages from Tynion’s final issue, letting readers get a look at some unfinished pages without the colours. It’s nice to look at, but given that this was the conclusion to Tynion’s Detective run, and a celebrated one at that, it would have been nicer if there was some additional information from Tynion or more sketches from the artists on their work (though that could be saved for an eventual omnibus edition of Tynion’s epic).

Batman – Detective Comics: Rebirth Deluxe Edition Book 4 marks the end of one of the best runs on the title in a while as well as a high point of DC Rebirth. Tynion’s focus on the characters and their journeys makes this book more than just an action adventure as everyone has to come to terms with the consequences of their actions and ponder the future. The artwork is great from all the artists involved and the deluxe format is well worth it for anyone concerned about getting this story again if they already purchased the standard paperback. Many Batfans will enjoy this story as Tynion sticks the landing to his epic run that brings everything full circle.