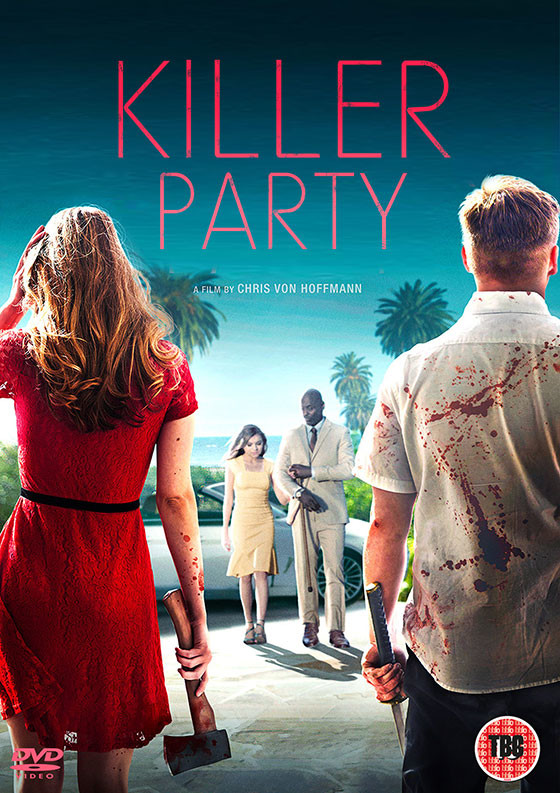 Three young thieves infiltrate a mansion dinner party secretly hosted by a group of recovering murderers for the social elite.

A fun slasher horror going for laughs rather than jumps and scares, Killer Party (also known as Monster Party in the USA)  scores high for amusing ridiculousness. A clever central conceit of a trio of young thieves breaking into a party hosted by serial killers is a strong concept that promises blood, gore and guts. The movie wholly delivers in this respect, also serving up laughs and entertaining slapstick humour.

The plot is pretty simple; three crims stake out places in wealthy neighbourhoods, break in and then run off with the loot. Aside from wanting to get rich quick, Casper (Sam Strike) needs to get enough money together to pay off his dad;s gambling debts which have got him into hot water with the local mobsters. Meanwhile Iris (Virginia Gardner) and Dodge (Brandon Micheal Hall) are expecting a kid, so the motive for piling up some ready cash is fairly obvious there.

After getting a tip off, the three of them take a job working as dinner staff at an elite mansion. They figure it’ll be simple to work and steal from the wealthy guests circulating around. They soon realise this won’t be the case as the family hosting the event – a sort of convention slash recovery meeting for blood thirsty miscreants – are grade-A serial killers.

High jinx ensues, with our three heroes, trying to figure out where all the money and valuable are without attracting the attention of the rogues gallery on show at the party. Predictably enough, this doesn’t go too well.

Of the monsters on display, Lance Reddick provides a camp king of gravitas in his role as head bad guy, while Robin Tunney matriarchal figure is well drawn. Fighting her urge to kill, she struggles to keep he urges in check. Most of the other monsters have no such qualms, and it’s amusing watching each of them trying out new ways to lose their cool.

Killer Party does what it does very well, bringing a clownish kind of horror comedy to the screen with liberal helpings of gore and blood. It doesn’t take itself particularly seriously, and most of the screen time doesn’t bear much similarity with reality. The tone does shift  towards the end, when the effects of all the killing starts to take a detrimental psychological effect on the survivor(s) (no spoilers), but even this is still done with tongue firmly in cheek. Above all else then, it’s an enjoyable, bloody romp.