Robb Sheppard on Fear and Loathing in Las Vegas… 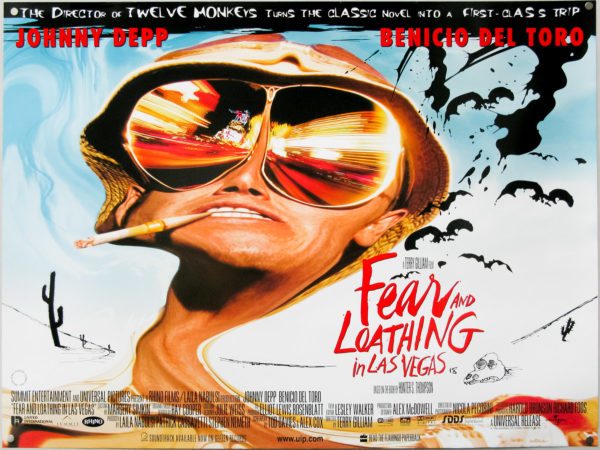 Wherever the source material is deemed excessively avant-garde, narratively non-linear or aesthetically challenging, the unfilmable label is a badge of honour for the ‘out there’ film fan. As well as a precursory warning that the film might be, err…a bit shit.

When it came to adapting Fear and Loathing in Las Vegas, the unfilmable tag kept the film at arm’s length from progress or production for the best part of 25 years. It was hardly surprising: Gonzo journalist and drug dumpster Hunter S. Thompson’s 1971 dissection of the American Dream was propped up on vivid hallucinations, narcotic narration and a slab of immoral misbehaviour.

The book’s opening salvo of; “…huge bats, all swooping and screeching and diving around the car, which was going about a hundred miles an hour…” set the tone. Before long, our ‘heroes’ are; “right in the middle of a fucking reptile zoo! And someone’s giving booze to these goddamn things!” And that’s only 24 pages in.

With one recent example of hallucinations being the ceiling-crawling baby in Trainspotting (terrifying, yes, but a marvel of movie making it is not), how Fear and Loathing in Las Vegas could be brought to the screen was anyone’s guess. Good job that ‘anyone’ was Monty Python’s visionary director Terry Gilliam and Johnny Depp. Yep, that Johnny Depp.

Even when Depp was an intriguing actor who made inspired film choices, the role of Raoul Duke, Thompson’s literary alter-ego, seemed a stretch. Duke’s physical tics, vocal eccentricities and male pattern baldness were miles from Depp’s aftershave advert aesthetic. 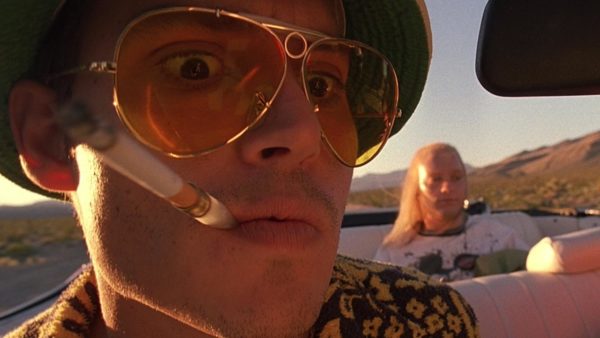 So Depp immersed himself in the role. He claimed Thompson’s red convertible as his own, so as to feel at home behind the wheel and even raided his wardrobe for that genuine 70’s feel (and smell, reportedly). Spending two week stints living with Thompson produced tales of firing practice with propane tanks and the host allowing Depp to sleep, and smoke, next to an unmarked keg of gunpowder.

To say the preparation paid off is an understatement. Depp’s Raoul Duke stalks the set like a tiny T-Rex: arms drawn up to his ribs, fingers splayed and legs bowing at the knee. His dialogue is distorted and too close for comfort, often incomprehensible and suggesting spit on the microphone. Duke’s excessive drug use is never second-guessed: it’s clearly habitual, often humorous and occasionally horrific.

It’s not all down to Depp though. Gilliam’s direction drags the viewer into the action, removing any sense that you’re simply watching a smack head. Not so lucky; you’re shooting up too. From the off, instead of a ‘shock n’ awe’ bat country sequence, the bats are reflected in Duke’s yellow-tinted aviators. Gilliam understates the exaggerated and just like that, the viewer knows not to trust what they, or the characters are witnessing.

Duke’s intimate narration is paralleled with simple effective use of camera angles. All too often, we’re right up in Duke’s grill: sweat pouring down his skin, pupils dilated and his omnipresent cigarette burning through the fourth wall. Duke’s comedowns are viewed via cameras that tower above him; his highs seen from low-angled, skewed shots.

Featured heavily throughout, Fear and Loathing’s representation of The American Dream causes as many bad trips as the LSD itself. Back in Duke’s hotel room, the war effort in Vietnam can no longer be contained in the television set, and is instead projected across the walls, ceiling and floors, with bombs falling all around and bullets zipping overhead. The great outdoors isn’t safe either, as the Mint 400 desert race quickly descends into a dust-shrouded apocalypse with helicopters passing over and hunting gangs out for the kill.

With the camera mounted on the hood, (sorry, bonnet) Thompson’s all-American convertible tilts left and right like a theme park pirate ship, swinging higher and higher, ever closer to tipping over. And as for ‘winning the big one’, any chance of this is severely diminished in the casino scenes, as pet apes go feral, and bad trips go unnoticed whilst sound tracked by something from Pennywise’s own personal SoundCloud.

Worse still than that, is that idea of making it in the city comes crashing down, not just for our protagonists, but for those around them. Lucy (Christina Ricci), an underage artist with a penchant for Barbara Streisand portraits, gets duped, drugged and degraded by the Doctor (a rabid Benicio Del Toro) before being kicked to the kerb. To rid themselves of their paranoia, Duke and the Doctor go on a hotel room bender that makes it look like the boys from The Hangover simply left the bed unmade and stole a towel. That is, we can only assume: Duke has to piece events together from some found audio and the flooded, ketchup-stained, bedsheet smouldering scene around him.

So, in the unfilmable stakes: excessively avant-garde? Narratively non-linear? Aesthetically challenging? Check, check and check. But what about being…a bit shit? Common criticism has always pointed towards Fear’s lack of plot: they go to Vegas, get wasted and escape unscathed. Nothing’s resolved, no lessons are learned and the cycle looks set to repeat itself. But isn’t that the point?

The positive energy created in the 60’s has stagnated, with the movement for change changing very little. People are referred to as “failed seekers” on a promise of peace, love and understanding. At the end of Fear and Loathing in Las Vegas, they’ve found nothing. But the search goes on.

Life, art and all that.