This week at the CBS and CBS All Access Upfronts presentation, the network revealed new information about the next Star Trek series, including the title, Star Trek: Picard. The highly-anticipated show marks Patrick Stewart’s return as Jean-Luc Picard, the first time audiences have seen him portray this character since Star Trek: Nemesis in 2002. With numerous Star Trek television projects in the pipeline, it’s no surprise that the title is popping up in different mediums too. Last month Dave & Busters revealed a new VR experience at 122 of their North America locations that puts players in control of the U.S.S. Galileo, Starfleet’s latest and most advanced stellar research vessel, accompanying the U.S.S. Enterprise on a routine mission to evacuate a stellar observatory located in the middle of the Klingon Neutral Zone and learn more about the decaying neutron star it orbits. When the neutron star collapses prematurely it leaves the Enterprise incapacitated, forcing the player to protect her from stellar debris – and the unwelcome arrival of a Klingon ship out for vengeance. 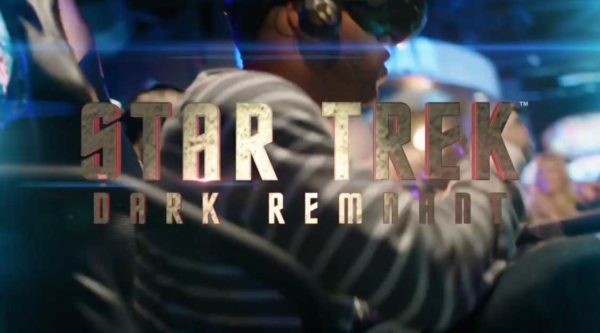 Trekkies are some of the most dedicated followers, wanting to know every aspect of these Star Trek projects. So we decided to dive deeper into Star Trek: Dark Remnant and reveal how a game like that is made, beginning with the title’s score by composer Matthew Carl Earl. Below Matthew discusses everything from the research he did for the game to how he approached the VR aspect.

There are a few different alternate endings for Star Trek: Dark Remnant. How different was the score for each of those?

Pretty different to be honest, though I tried to use as much of the same musical ideas as I could to keep things continuous. The big return to the main theme was something we were sure to keep in all of the endings.

Star Trek: Dark Remnant is a VR game. What measures have to be taken when scoring a VR project as opposed to a regular game? How technically complicated is it?

There are definite differences in my approach to scoring a traditional game verses a VR game. Style wise, I tend to underscore VR projects a bit more to keep them sounding more ambient and immersive. This actually proved to be an interesting challenge for this project because Star Trek’s music has always been so bombastic! As for the technical side of things, it would normally be the same as a traditional game, but because VR games tend to strive for more interactivity, we tend to add a little more interactivity into the music which adds a bit of complexity to the technical side.

Were you a Star Trek fan before beginning work on this project? If so, what is one of the main things that sticks out to you about any Star Trek project you have seen?

Actually, I wasn’t! So, when I heard we were working on a new Star Trek project I made sure to binge myself into the Star Trek universe. Learning the lore and the musical themes and styles that have already been established. The biggest thing that sticks out to me is the music. Star Trek is interesting in that it has a large range of emotions and I think Michael Giacchino does an awesome job at creating a score that is fun, serious, dark, and bright all at the same time. 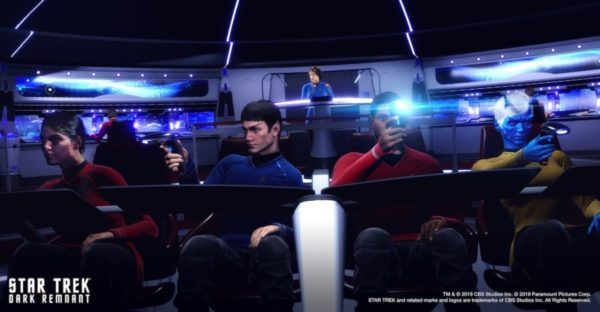 If you were a fan before this, do you think that helps or hurts you with your approach to this new tale?

I think it would be foolish to approach any score without actually being interested in the music and the story, so because I wasn’t a fan beforehand, I actually had a lot of catching up to do! But luckily, because the Star Trek universe is so well crafted, falling in love with this style of music and this franchise was quite easy, haha!

There are many different composers from all the Star Trek projects. Which one, out of all of them, did you draw the biggest inspiration from for this game?

Michael Giacchino was definitely the biggest inspiration here. His main theme to Star Trek 2009 was the main musical idea we decided to use all over this score. Though I was looking all over the franchise for inspiration as the music has always been incredible!

CBS just announced that they are expanding the franchise with new digital spaces and more consumer products such as video games. What do you think of this? Would you be up for scoring more Star Trek stories?

Oh, absolutely! I would love to work on some more Star Trek. VRstudios produced this experience in conjunction with Strange Reptile for Dave & Busters and brought in our studio Hexany Audio, so we’re incredibly grateful to them for bringing us into this universe. A full-length Star Trek video game would be insanely cool! Honestly, this was some of the most fun I’ve ever had writing music in my entire life. I love this style, and I love working with these brilliant themes!

–We read that you watched some of the older Star Trek films and tv episodes to prepare for this project. How do you think the Star Trek “sound” has evolved from the very beginning to now?

Obviously this franchise has been around a long time and it’s sound has changed along with popular musical trends, but the main thing I think has persisted throughout is the interesting blend of being a dark, epic, orchestral score, but at the same time it feels super fun and bright. It’s almost hard to describe in words, but it parallels the feel of the Star Trek narrative so well. I don’t think that has ever gone away.

Many thanks to Matthew Carl Earl for taking the time for this interview.