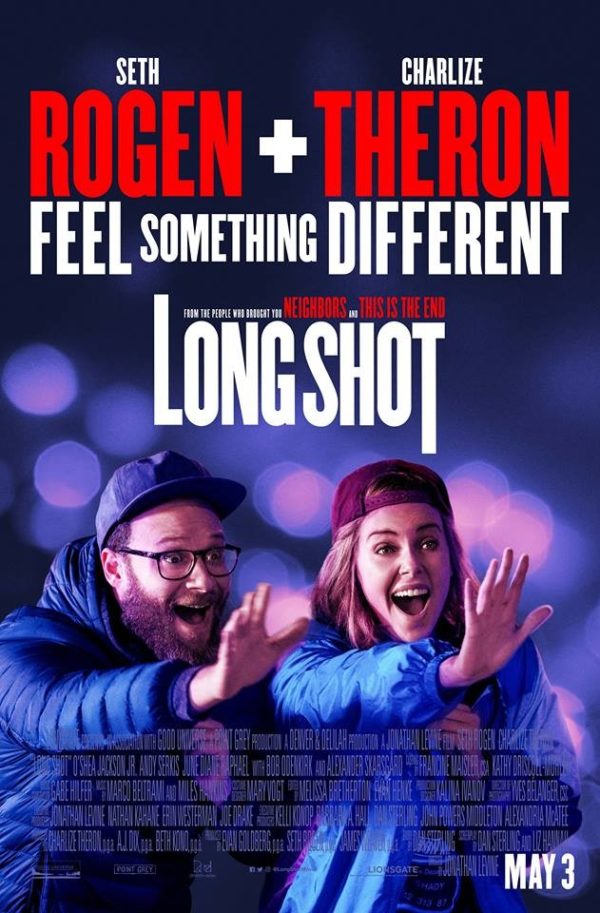 When Fred Flarsky reunites with his first crush, one of the most influential women in the world, Charlotte Field, he charms her. As she prepares to make a run for the Presidency, Charlotte hires Fred as her speechwriter and sparks fly. Given the horrors that real-world politics present on a daily basis, it’s understandably a subject that most studio comedies tend to veer away from; after all, your average Seth Rogen chuckle-fest is all about that weed-haze escapism and easy bromantic chemistry.

And so, seeing Rogen re-team with one of the writers of his controversial 2014 vehicle The Interview for a rom-com themed around politics both gendered and geo doesn’t exactly suggest a treatment either delicate or nuanced.

But Long Shot also pairs Rogen with director Jonathan Levine (50/50, The Night Before) for the third time, and Levine’s penchant for wringing sneaky pathos out of potentially low-brow material prevails once again. However, the MVP honours ultimately go to Charlize Theron, whose consistently under-appreciated comedic chops are on full display throughout the film’s slightly overstuffed 125-minute run-time.

Fred Flarsky (Rogen) is a journalist working for an independent political news website, but when it’s bought by a grossly right-wing media conglomerate, Fred promptly quits his job in a rage. As he drowns his sorrows with his pal Lance (O’Shea Jackson Jr.), however, he ends up at a party where he crosses paths with Charlotte Field (Theron), his childhood babysitter and former crush.

After a quick re-meet-cute, Charlotte hires Fred to work as her speech writer, the rub being that, in fact, she’s the U.S. Secretary of State and is planning to run for President in the near-future. With a potential romance between the pair hanging in the balance, can it weather the storm of a political media circus patently obsessed with image – and perhaps unable to accept that the future POTUS would fall for a guy like Fred? What’s most impressive and surprising about this movie is just how nimbly it hits all its far-flung genre markers; crafting a political satire that’s also genuinely romantic and wantonly crude all at the same time without giving the audience mood whiplash is surely not easy.

Sensibly, the script from Dan Sterling and Liz Hannah stops short of getting too real and making the current POTUS an orange-haired cartoon character, with the outgoing President Chambers – played with wonderful buffoonishness by the brilliant Bob Odenkirk – instead adopting an air closer to Ronald Reagan, right down to a prior career in the entertainment biz.

But the real crux of Long Shot‘s social satire examines both the vapid, image-centric nature of campaigning to an immensely fickle electorate, and how much tougher that job is when you’re a woman. Theron’s Charlotte, an impeccable image of elegance who polls suggest isn’t “funny enough” to be President, is an extremely well-tempered (because she has to be) but perennially frustrated person with a very real desire to affect change within a system that craves anything but.

On a broader level it is a film that takes people to task for their prejudices; not only the sexist pigs keeping Charlotte down, but those who don’t deem the windbreaker-obsessed Fred to be “worthy” of Charlotte, and even hot-headed liberals unwilling to accept the possibility that not everyone who votes Republican is quite the spawn of Satan.

While it thankfully stops short of making a passionate “can’t we all just get along?” plea, Levine’s film ensures to take just about everybody to task for their preconceptions, ensuring it feels less like a not-so-jokey screed against Trump voters and something a little more accessible.

But if this review suggests that the film is a political comedy with mild romantic undertones, that’s perhaps inaccurate, because the real high-point is indeed the love-in between Rogen and Theron’s protags. If, like many of the movie’s characters, you’re doubting the plausibility of a Rogen-Theron hook-up, the film makes a mighty effort to change your mind, girded by effortlessly charming chemistry between the pair, which never makes it tough to buy that these two could be lovers in real-life. As such, when they inevitably grow closer, it feels completely organic to the narrative – heightened though it undeniably is.

The only real gripe against Long Shot – beyond it being less prone to primal gut-laughs than prior Rogen and Levine collabs – is that it does feel rather on the long side for what the material bears out. At over two hours, there are a couple of over-indulgent sequences which probably should’ve been saved for the Unrated cut or the deleted scenes reel, even if the film’s hefty length does at least help ease the plausibility of the focal romantic pairing.

Long Shot might disappoint those hoping to decisively leave real life at the door for two hours, but for anyone craving a smart yet broad precis on the idiocy that makes the world go around – and treats women as second-class citizens – it’s a dynamic stab at a diverse array of targets.

The Rogen-Levine dream team strikes again, filtering their brand of smart-dumb heartfelt comedy through the lens of contemporary politics with a terrific Charlize Theron performance in the bargain.