Tom Jolliffe takes a look at the work of director Jack Sholder – most notably, A Nightmare On Elm Street 2: Freddy’s Revenge… 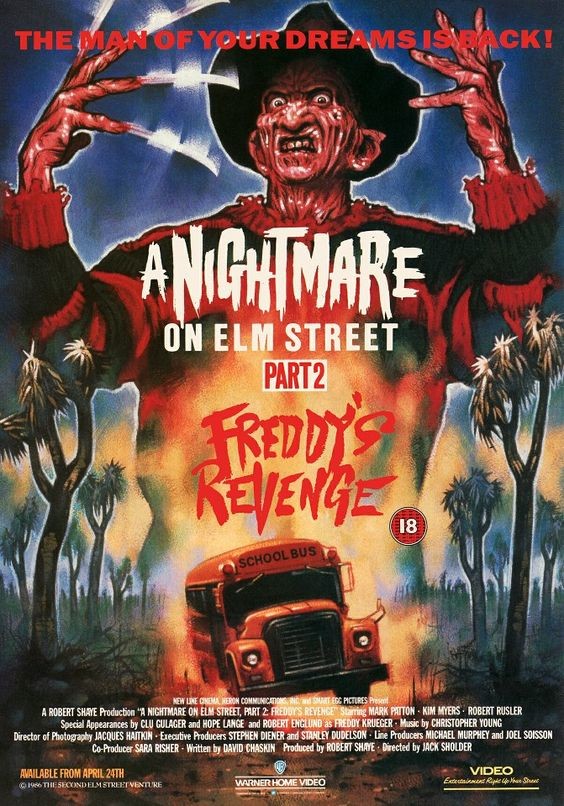 As a movie going aficionado, I watch a lot of films. I have certain favourites, be they actors, directors, composers or writers. I can tell you with assurance that I’m a fan of Steven Spielberg’s work, because on the whole (particularly Golden period) he’s made a huge amount of great work. With stars it’s easier to identify yourself as a fan of course, because a Tom Cruise film for example is quite evidently, a Tom Cruise film.

So what happens then, if like me, you have a massive oversight? What if you go through over 20 years of liking a few films. Maybe in subsequent years you catch up with a couple more films but still don’t join the dots. With a crew member it’s more understandable that you may watch 10 different films without necessarily associating that they’re all lensed by Roger Deakins for example. So the other day I had an awakening. I suddenly joined dots. It suddenly became apparent that there was a selection of films I’ve dug for years which were in fact all directed by the same guy…Jack Sholder. 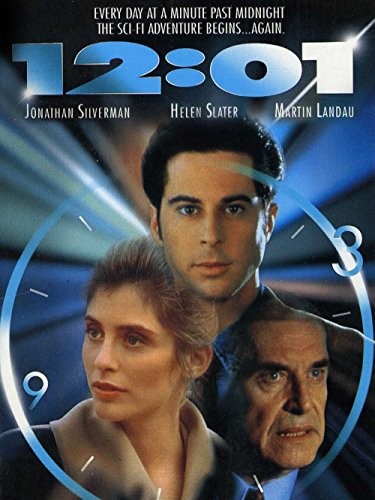 The first film of his I watched was 12.01. It’s essentially Groundhog Day, and whilst not as fantastic as Bill Murray’s comedic slice of gold, 12.01 was really solid. I loved it as a kid, and as more of a thriller, it just had a little more at stake than the lightness of the Murray/Ramis comedy. It had the guy from Weekend At Bernies (Jonathan Silverman) and Supergirl from Supergirl (Helen Slater) in it.

As an 80’s/90’s action lover, and always appreciative of a good buddy cop film, Renegades may not have been one of the finest offerings, somewhat riding the fumes of Young Guns given it recast Kiefer Sutherland and Lou Diamond Phillips as the titular renegades. Still, it was one I enjoyed, and still did so with subsequent revisits. 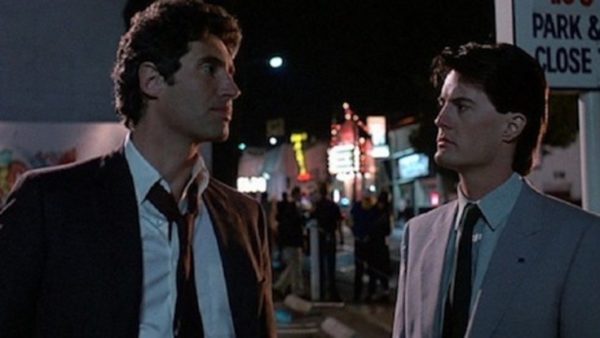 Sholder’s master work in the eyes of many, is probably The Hidden. It’s a great cult sci-fi Horror. It kind of escaped attention initially before picking up more of a cult audience. Similar to They Live in that regard. It feels in fact, like it has an identity that’s somewhere between John Carpenter and David Cronenberg, but it’s a really great 80’s cult film (starring Kyle MacLachlan and Michael Nouri).

One thing I now find myself needing to remedy, is the fact I’ve not seen Alone In The Dark, Sholder’s breakout film. An impressive cast including Martin Landau, Donald Pleasance, Jack Palance and Dwight Schultz (or raving Mad Murdoch from The A-Team to the layperson). A quartet of psychotics escape an asylum and go on the hunt for the doctors who’ve been treating them (with questionable methods). Sholder or not, it’s a great concept, but as (I’ve now discovered) a fan, it should be great. 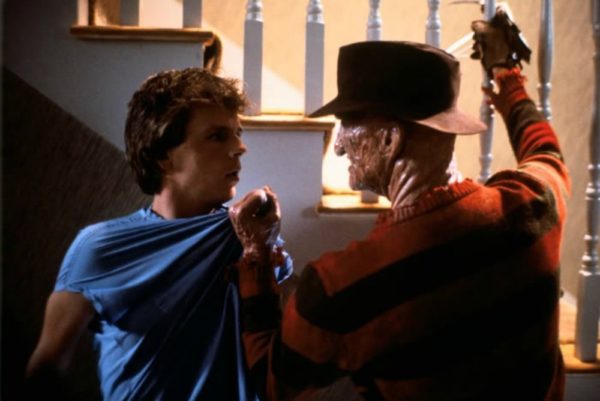 For me though, one film that seems to really split audiences in Sholder’s CV, is one of my favourite horror sequels. A Nightmare on Elm Street 2: Freddy’s Revenge. The first three sequels were a diverse and enjoyable mix to a franchise that began so iconically with Wes Craven’s original. There were quirks and changes to ‘the rules’ throughout, but perhaps the stark rulebook tearing of the first sequel, and some questionable choices, have left the second film as one of the forgotten films of the franchise, particularly in comparison to the quirky, MTV styled charms of Dream Warriors (3) and The Dream Master (4).

Freddy’s Revenge has also gained subsequent notoriety for the supposed subtext of the film. It’s oft labelled as overtly, almost intensely homo-erotic. So much mutual male sweat, visits to gay-bars, notions of interior penetration, a growing disinterest in the female lead, and a bondage sequence all lend credence to that (as do lines like, ‘Fred Krueger! He’s inside me, and he wants to take me again!’). Some felt the film may have been a sly allegory about the Aids ‘epidemic’ of the time. Regardless, whilst it’s there, and as with many things in the 80’s (think many a homoerotic action film) just how intentional much of it was is debatable. For me though, of all the films in the franchise, this is the one that gets picked apart by film professors and students alike (particularly if a semester of LGBT cinema is covered) most, which makes it the most interesting one. Okay, it’s cheesy, it’s over the top at times, and there’s been a tad too much reading between lines, but homo-eroticism aside, Freddy’s Revenge is also a great horror film. Though might be argued too, that any intended portrayals that come through in the film, come across as negative, homophobic and problematic (in the modern age). 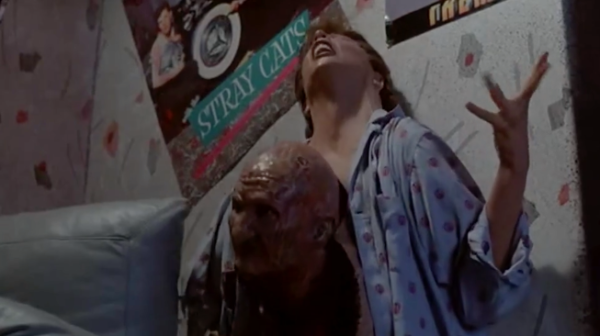 It may drift Freddy away from being a predominantly nightmare spirit to a kind of possessive spirit, and then physical entity, but the film looks amazing. The cast are pretty decent too. This was largely a strength in this franchise compared to rival franchises of the era too. Mark Patton as lead is put through the ringer. You can feel him being driven to madness. There were rumoured issues between himself and Sholder, and the film to all intents and purposes (not least because it crashed with critics) destroyed Patton’s career. It’s a shame, because he comes across pretty well, because those battles beyond camera seem to inflict what’s on camera, to the benefit of the film (which also, at times is almost sadistic in punishing its protagonist).

An aspect that Sholder really brought across very well in the film too, was heat. This film is dank, humid, sweaty, punishing and intense. You feel it puts the characters (Jessie in particular) through persistent discomfort. Day exteriors take place in sweltering sun. Home interiors take place on the backdrop of faltering air-con in a summer heatwave. Set pieces take place in steaming shower rooms, blistering boiler-rooms, the intense heat of a leather laden gay nightclub. With Freddy comes fire and flame. The designs of Freddy himself, looking almost more demonic and gargoyle-esque than how the original and subsequent sequels would picture him, I really dug too. 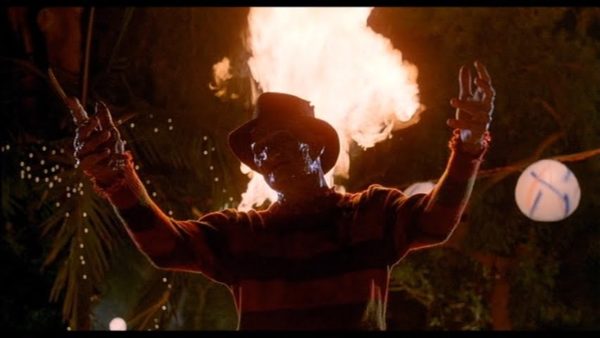 The film in some aspects didn’t quite work of course, but the antipathy toward it seems unfair. It’s a punishing, brutal and glorious looking horror film. I liked so much of this film, that whilst there’s perhaps a more overtly enjoyable, consistent pzazz to the next two sequels (and latter a great flip on form from A New Nightmare) this is probably my favourite Elm Street sequel. Still, that I didn’t quite form the connective strands between this, 12.01, Renegades and The Hidden, surprises me. Sholder’s career dwindled through the late 90’s and his last major feature was Arachnid in the dawn of the new millennium, but regardless, he crafted fine work in the 80’s and 90’s with some notable peaks.

Have you ever had a similar realisation? What do you think of Sholder’s work? Let us know on Twitter @flickeringmyth or in the comments below…