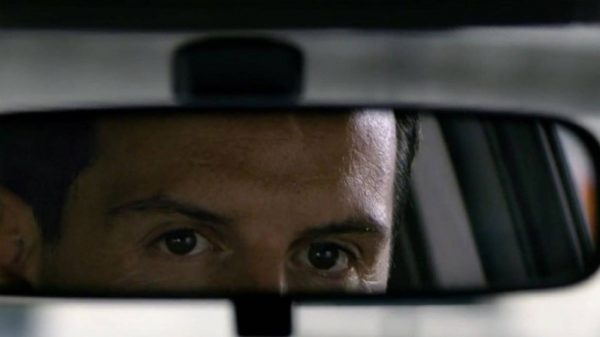 There is an immediacy and rawness to this opening salvo which strips away any big budget gloss, any fanciful locations and merely focuses on character. London late last year is as drab, grey and soulless as the colour palette allows while a washed out Andrew Scott ferries people around perpetually distracted. Charlie Brooker has said these episodes can be watched out of sequence heedless of cliff hangers, narrative through lines or a reliance on structural continuity. Meaning that to all intents and purposes Black Mirror is merely a series of moral fables with an underlying social relevance. A tradition which’Smithereens’ carries on even if the visual flair has been dialled back for dramatic resonance.

In many ways this reminds me of a story Charlie Brooker told in which he recounted the addictive qualities of smart phone technology. That idea that we wake up and the phone or social network is our first port of call every morning. A compulsion which is so genetically engrained that our sense of worth becomes intrinsically linked to it. Brooker has examined our obsession with technology previously through episodes including Nosedive, but here he takes it to a darker place whilst postulating on the intrusive nature of social media platforms.

As you would expect from someone who reimagined Hamlet for the stage Andrew Scott is riveting. Pent up, grief stricken but self-aware enough to be savvy his virtual one man show grounds the whole thing. If anything ‘Smithereens’ is more blatant than Brooker has been for some time and Scott is a willing mouth piece to vent his evident spleen. Comparisons with Facebook, Mark Zuckerberg and the monster he created are unavoidable. Although the names have been changed Brooker’s points which are filtered through road traffic accidents, silent retreats and inconsolable grief water nothing down.

There are no ground breaking epiphanies to be garnered from this opening gambit nor should you be searching for any hidden sub-text. Similar to Colin Farrell in Phone Booth we are trapped watching someone slowly unravel. That the audience is engaged enough throughout to last the full fifty minutes of running time rests with Andrew Scott, who invests this widower with depth, pathos and empathy. For anyone who thinks they are spending way too much time checking their phone this should ring some bells. Everyone else will probably be oblivious watching ‘Smithereens’ on their smartphone waiting for the traffic lights to change. Irony it seems has a sense of humour.