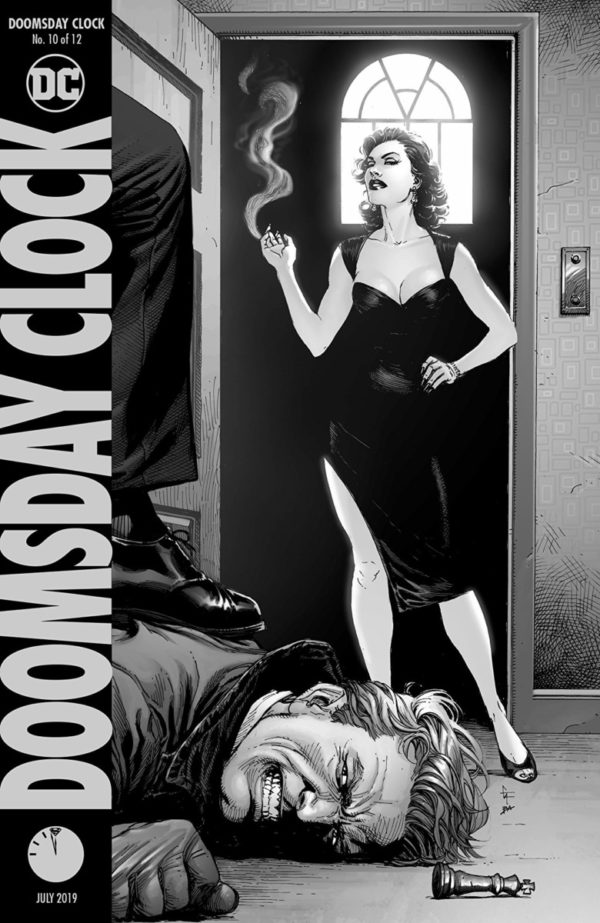 With each delay of DC’s Doomsday Clock, I’ve found myself getting less excited for the next issue. Then the next issue comes out and I remember exactly why the lengthy waits are worth it thanks to Geoff Johns’ writing and Gray Frank’s artwork. That happened once again with Doomsday Clock #10, an issue which is hands down the best one yet in Doomsday Clock that not only provided answers on Dr. Manhattan’s motivations, but revitalized the series before its final two issues.

One criticism I’ve had before on the series is while Superman and Manhattan are supposed to play central parts throughout the story, they’ve both made sporadic appearances and have been part of the story in more thematic than physical ways. That has slowly changed in the latter half of the series and Doomsday Clock #10 makes it loud and clear just how much the story has revolved around them both. The issue follows Manhattan along as he jumps at different points in time, following Superman’s very varied history as changes are constantly made to his introduction to the world, a fact which both perplexes and excites Manhattan. Superman, he surmises, is the central tenant to the DC universe, the key to its existence and Manhattan’s control over it. It’s a pretty exciting explanation for why Manhattan has been so interested in the DC universe and Superman in particular.

As he did a few issues ago, Johns perfectly captures Manhattan’s point of view as he travels to various points in time. From the way Manhattan dispassionately observes the world to how enamoured he is with Superman’s place in the universe, he sounds in character to who he was in Watchmen. The great thing though about Johns’ use of Manhattan is how he finds very interesting parallels between Manhattan and Superman, namely how Manhattan is a man of inaction while Superman is, rightly so given the comic he was introduced in, a man of action. Johns goes a bit further by examining how Superman is the focal point of hope, something Manhattan nor any other character from Watchmen could be.

Johns has had a lot of success writing Superman with stories like Brainiac, Secret Origin and Infinite Crisis. The best aspect of this issue is how it examines Superman’s place not just in the DC universe, but on a meta-level as well for the comic book genre. He is, after all, the very first superhero. The way Johns actually utilizes the events from Action Comics #1 and incorporates all of his various origins, from the Silver Age to John Byrne’s Man of Steel reboot, is a great way of honouring all of Superman’s history. Johns isn’t even afraid to take on his own New 52 origin by addressing the common criticism that Superman seemed more distant from humanity, using it as part of Manhattan’s machinations to put his own stamp on the DC universe – or ‘metaverse’ as he now calls it – and feels closer to Superman due to that distance. It shows how much Johns understands both Superman’s place in comics as well as DC’s history.

Apart from the focus on Superman and Manhattan, we also get a great look at the Justice Society of America in their formative years as well as how and why Manhattan forcibly erased them from history. The chemistry between the Justice Society members is great and acts as a nice parallel to the first meeting of the Crimebusters in Watchmen. We also get some closure on one of Doomsday Clock‘s long running subplots, much like the ‘Tales of the Black Freighter’ segments, with Carver Colman and his mysterious death. Johns is wrapping loose ends and brings things together in some nice ways, though with only two issues left there seems to be so much left for him to do. It’s been a while since we’ve caught up with Marionette, Mime and The Joker, the roles the Justice Society and Legion of Superheroes will potentially play and, of course, the Superman Theory. It seems a lot to wrap up in just two issues, but hopefully Johns will be able to stick all the landings.

The only thing that tops Johns’ writing is Gary Frank’s artwork. As much as the delays might frustrate some, it cannot be denied they end up being worth it with the quality Frank puts into it. The detail on the characters and surroundings is incredibly illustrated. He even captures the subtle differences of Superman’s various costumes very well, but the facial expressions on the characters are close to perfect. Brad Anderson’s colours compliment Frank’s pencils to a great degree. From the visuals of the black & white film to the brightness of the Justice Society’s costumes, this is a very vibrant book with a nice, wide array of colours. Everything about Frank and Anderson’s artwork is gorgeous.

Doomsday Clock #10 feels like a bolt of lightning to the series as it reaches its conclusion. The focus on Manhattan’s point of view and emphasis on what makes Superman such a strong pillar of the universe is something Johns examines very well. He very much understands who these characters are and the impacts they have on the rest of the world. Frank’s pencils and Anderson’s colours elevate the story with their stellar visuals, creating the best looking issue of the series to date. With two issues to go, Johns, Frank and Anderson look like they’ll deliver something special and worthy of all the delays.