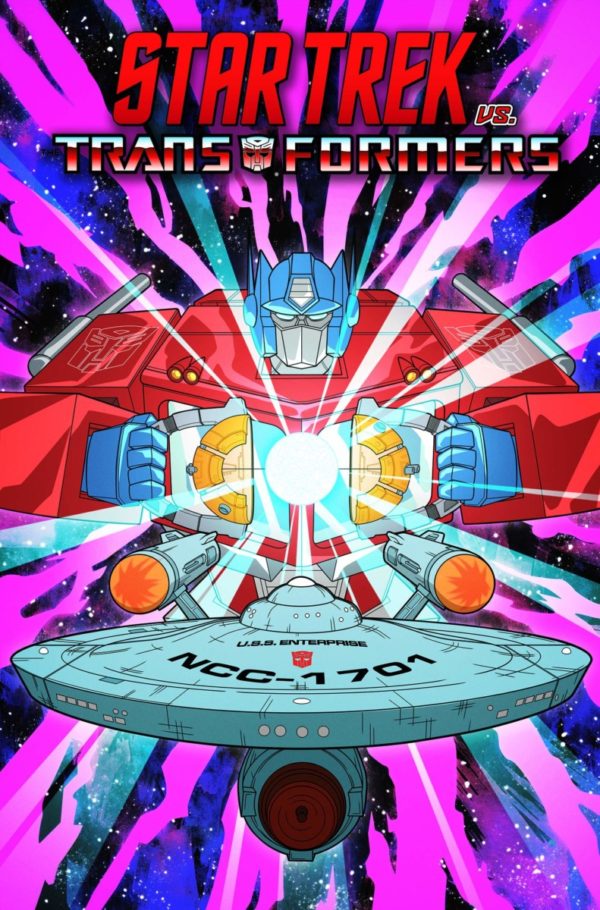 IDW’s latest crossover features something that is actually fairly easy to imagine as Captain Kirk and the rest of the crew of the USS Enterprise encounter a new lifeform in the galaxy: Cybertronians, or better know as the Transformers. Veteran Transformers writer John Barber and Star Trek author Mike Johnson team-up on Star Trek vs. Transformers, bringing a fun story that captures most of the potential of these two series meeting and battling each other while retaining the good-spirited cheesiness of Star Trek: The Animated Series and Transformers cartoons.

Called upon to investigate a mine that has come under attack, Kirk and the Enterprise discover it is not the Klingons who have attacked, but a group of 20th century styled aerial fighters who are really Decepticons. It’s not long before Optimus Prime literally rolls out and helps defend the miners and the Enterprise’s away team, setting off an alliance between Kirk, Prime and their respective groups to prevent a potential Klingon-Decepticon alliance to rule the galaxy.

Barber and Johnson do a great job at re-creating the light atmosphere of the two cartoons, going so far as to include the animation-only Enterprise crew members M’Ress and Arex. They reach the potential between these two vastly different franchises as Kirk and McCoy wonder at the Autobots archaic forms while they reference their difficult time on Earth due to the Eugenics Wars and other violent conflicts in Star Trek‘s late 20th century history. The characters have nice chemistry together with some of Spock’s interactions with the Autobots being fairly memorable as well as Megatron’s dealings with the Klingons. It also helps that Star Trek vs. Transformers embraces all the wild possibilities of these two franchises meeting up, such as the Enterprise crew outfitted in transforming mech suits of their own or Fortress Maximus transforming into a giant copy of the Enterprise. It’s crazy stuff that doesn’t take itself at all seriously in the best way possible.

The story goes by pretty quickly. It won’t take readers very long to get through it all as its not only easy to read, but moves along at a nice pace without anything to drag the story down. It’s still fairly thin as Barber and Johnson don’t quite elevate it beyond battles between the Enterprise and Autobots and the Klingons and Decepticons, but they still manage to instill some of the philosophy Star Trek is known for as Kirk and Spock muse about the type of lifeforms the Autobots are and what they can be capable of. The themes aren’t as deep as they could be, but they still work within the story and create some good dialogue between the characters.

Philip Murphy handles the artwork for four of the five chapters while Jack Lawrence fills in for one issue. Both artists nicely capture the aesthetic of the Generation 1 Transformers and Star Trek: The Animated Series. Murphy even goes so far as to utilize some of Star Trek: TAS‘ well known elements, such as awkward close-ups, the stiff running of the characters or how cartoonishly muscular Kirk looks compared to the live-action William Shatner. Similarly, the Autobots and Decepticons look great in their classic G1 forms. Murphy and Lawrence do well even adapting Windblade and Arachnid, two of the more recent additions to the franchise, into G1 bodies and alt-modes. Meanwhile the colours from Priscilla Tramontano, Leonardo Ito and Josh Burcham are very vibrant and make each image stand out. The colours even match the types of backgrounds both series used. The action is well-plotted by all the artists with nothing out of place or getting lost in the shuffle all that much. It’s easy to follow and fun to read.

Star Trek vs. Transformers may not be the most in-depth story either franchises have to offer to fans, but Barber and Johnson manage to place some focus on the philosophy Star Trek is known for and how they can relate to Transformers. It’s a fun story with good character interactions between the Enterprise and Autobots, making this a memorable enough mash-up of two of the biggest pop culture franchises IDW have put out.