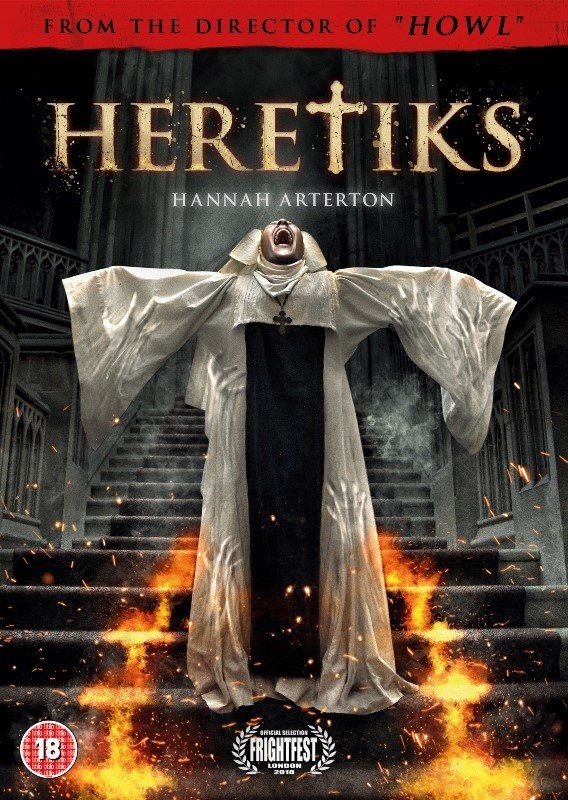 A young woman about to be executed for being a witch is saved by a nun and sent to a convent to repent, only there is a greater evil lurking within the convent walls. 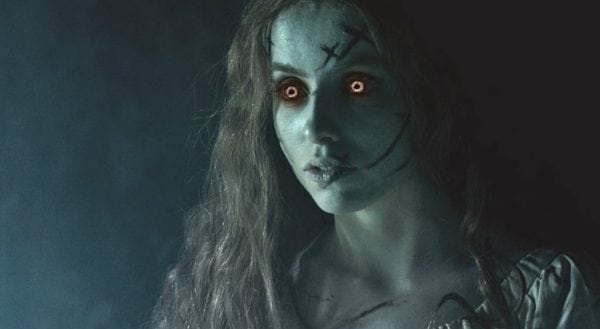 More often than not, the shared experience of watching a movie on a big screen with an audience can elevate a film from mediocre to something more enjoyable, even if technically the film is not great; see any number of low-budget slashers shown at a festival for proof. However, occasionally the opposite is true and a movie that failed to have much impact on the big screen can work better in a more intimate setting, the chills creeping in when you’re sat in a dark room on your own watching it on a small(er) screen. This was the hope going in to watch Heretiks on DVD after seeing it at FrightFest last year.

And as a horror movie to watch late at night when the lights are off Heretiks does have atmosphere, the gloomy 17th century setting perfectly captured by some creepy establishing shots of the convent where the bulk of the story takes place and the interior scenes being very dark and almost clammy thanks to some authentic set dressing. Heretiks also benefits from a brilliant anchoring performance by Clare Higgins (Hellraiser) as the Reverend Mother, both chilling and heroic (in the broader sense of the word) at the same time and with the Reverend Mother being the closest to a fully developed character on the screen, Ms. Higgins brings considerable weight with her performance, perhaps spurred on by her previous genre work and tapping into that vibe but it works and whenever she is on-screen the film seems to step up a gear.

But the flaws that made Heretiks a bit of a disappointment on its festival debut are still problematic on the small screen; less so, but they are still there. Apart from the Reverend Mother, the other characters in the movie are all paper-thin and underwritten to the point where they are fairly interchangeable. Hannah Arterton (Walking on Sunshine) plays Persephone, a young woman accused of witchcraft by the local magistrate (played for some reason by the legendary Michael Ironside, who only appears for a couple of minutes at the beginning and is never seen again) but is given a chance of redemption by the Reverend Mother and taken to the local convent, but as the lead character she is fairly drab and once at the convent she blends in with the other characters to the point where it is hard to work out who is doing what at any given time. There is a ‘lady in black’ character who pops up to provide exposition to Ellis (Freddy Carter – Wonder Woman), a local lad who makes deliveries to the convent, but both of those characters feel unnecessary as anything they say or do rarely results in anything significant.

The main thrust of the story is that there is a great evil at work within the convent walls and for the first hour we get flashes of this by way of CG fire, the occasional jump scare and the usual Crazy Ralph-style warnings from the black-robed prophet of doom but there is very little in the way of excitement or tension, seeing as it is telegraphed early on that something evil is afoot. The final act ramps up the action a bit but when the film has a total running time of 77 minutes and you’ve spent the first 60 of those building towards something then you would expect nothing less, and despite there being some blood, more CG fire and lots of fancy dress store contact lenses Heretiks never really reaches a crescendo, rather it just sort of fizzes out. Given the plethora of cheap nunsploitation movies released in the shadow of The Nun there is a lot of competition for Heretiks to go up against, and whilst it was clearly made with good intentions and a bit of passion, the faux-Hammer Horror atmosphere and a wonderfully wicked performance from Clare Higgins aren’t enough to raise it above being – at best – average on an entertainment level and another title to tick off the list for nunsploitation obsessives.