Tom Beasley sits down with Sacha Polak, director of Dirty God, and her leading lady Vicky Knight to discuss their powerful tale of a young woman dealing with the aftermath of an acid attack that leaves her scarred… 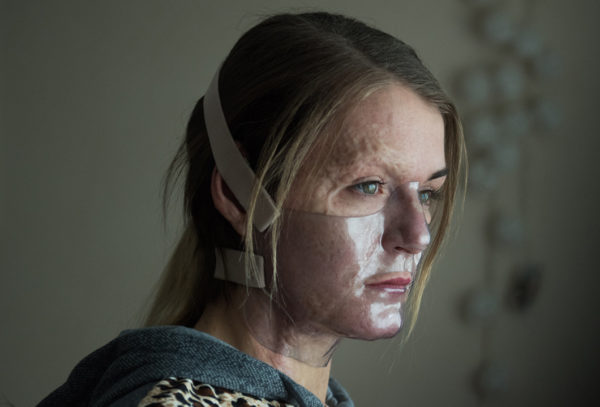 London has been referred to in various reports as “the acid attack capital of the world”, which is not a title that anyone should be proud to see. It’s that very unique form of brutality that provides the inciting incident for Dirty God – the English language debut of Dutch director Sacha Polak. The film follows Jade, played by real burns survivor Vicky Knight, as she tries to deal with the aftermath of an ex-boyfriend’s attack that left her badly scarred.

Ahead of the release of the film into UK cinemas after its acclaimed debut at the Sundance Film Festival, Polak and Knight sat down with Flickering Myth to chat about the process of getting the film made and the issues at play on the screen.

Sacha, I wanted to ask you to explain the process of getting to make this film.

SP: I was at a music festival and I saw a young woman who was a burns survivor. I looked away and saw that everyone else was doing the same thing. I thought this woman must deal with that every single day of her life and she can never hide from it. So this woman stayed with me for such a long time and at a certain point, I said to Marleen Slot – our Dutch producer – that I wanted to make a film about this and she was really enthusiastic.

At that time, I was working here in the UK and preparing another film that I didn’t want to make in the end. I met Susie Farrell, my co-writer, and together we started interviewing young burns survivors. We heard about these acid attacks and that immediately felt like such a horrible thing. So that started the film off. 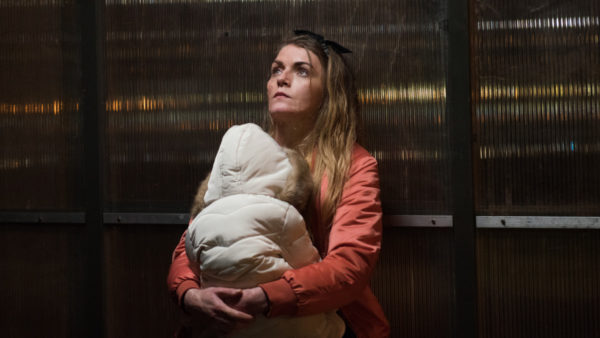 Why was it so important for you to cast someone who was a burns survivor themselves?

SP: Immediately, I wanted to work with somebody who had gone through something similar and had real scars, instead of having a famous actress and it being “oh, the make-up was so great”. I was not particularly interested in that. So when we didn’t even have money to finance it and didn’t even know if we could make it here, because it had never happened that the BFI or BBC gave money to a Dutch director, I immediately said I wanted to know if there was a girl out there.

So we started casting really early, before there was a script or anything. We found Vicky, but she didn’t want to talk to us.

VK: A few years before, I was cast for a documentary. They came to me and said they wanted someone with burns and to see how they lived their life, day in and day out. I accepted, because I got bullied a lot in school and I wanted to say ‘fuck you, this is me’.

We filmed for ages, a really long time. I’m gay and they put me on blind dates with boys. One of the boys was also gay. As soon as I walked in, they said: “take your jacket off, tell him what happened to you”. It was brutal like that, literally. One of the boys actually got up and went home, but they didn’t show that. They sent me an email: “It’s gonna be called Too Ugly for Love. Thanks for being a part of it.”

So I was completely humiliated by that and I refused to doing anything like it again. Lucy Pardee, the casting director for Dirty God, came to me on my social media and asked me to contact her. Because I thought it was going to be a similar thing, I declined straight away and just ignored it. One day, a year later, she rang me on an unknown number – she was still going – and we got talking.

She explained what it was going to be and the thing that convinced me was that I was not going to play myself, I was going to be a character. So I met with Lucy, we did a self-tape and then Sacha came over. We met, auditioned and made a movie. 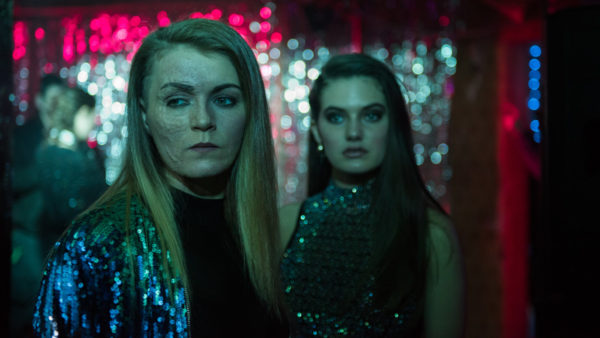 Obviously, you’d never acted before. How did you find that ability?

VK: It was with the support and direction of Sacha, as well as from my own experiences. It is acting, 100 per cent, but it’s also not in a way. The emotions that came with it fell into place. I’m not saying it was easy, but I knew how to get into those feelings. We went through the script in the beginning and I related each scene to similar things I had been through.

I was also in the auditions with all of the cast. Bluey Robinson, who plays Naz, I said I’d turn straight for him. [laughs] There was a connection there and with the other cast members too. We also did our own thing. We changed a lot of the slang in the script.

That was another thing I wanted to ask as well. All of the relationships and characters feel so authentic. Was that a part of you guys, as actors, being able to shape the script and how the story was told?

VK: They spoke for about six hours and really got into the feelings my mum had gone through when I was a kid. With Rebecca [Stone, who plays best friend Shami] and Bluey, as well, we went out a few times and just formed a really good friendship. The moment I met Rebecca and Bluey, I said to Sacha that I really liked and connected with them. Me and Rebecca did one scene that was really good and I just said “I love her” and kept going on about how much I wanted her in the film. 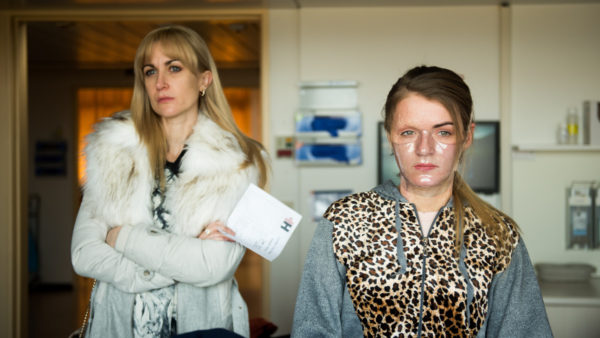 So you had no choice, Sacha?

SP: Yeah, Vicky did the casting for this film.

It’s a very vulnerable and intense bit of acting for someone who has never done it before?

Moving on from that subject area completely, Sacha, this is your first film in English. What was that transition like?

SP: It was wonderful. There are some differences. It’s more professional here than in the Netherlands.

VK: They don’t have health and safety! [laughs] 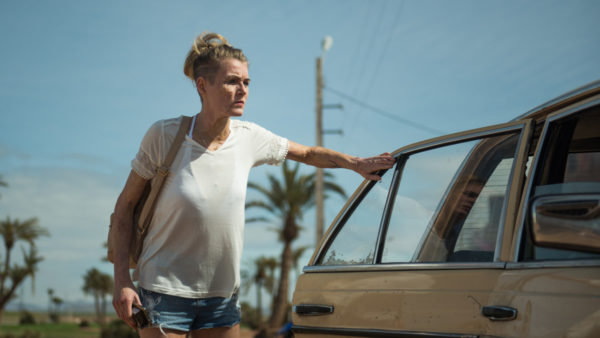 SP: No, we don’t. And we don’t have trailers or lots of lawyers and reports on everything. When you work here, you have a driver who will only drive for instance Vicky and will wait for her the whole time.

VK: They booked a car to take me literally across the road from my hotel to the set.

SP: In the Netherlands, everybody does a bit of each other’s jobs as well. Those differences are much more pronounced. And here, you get sued if something goes wrong. It’s much more like America. So it took some getting used to, but it’s nice and I’d love to make another film here.

It almost would have been easier to tell this story by following the court case. What was it that led you to focus on a more character-driven approach?

VK: It would be two different films. This film is about the character and how she copes and gets back into motherhood and normality. If we put in the whole court case, it becomes a completely different film – based on him and not Jade. And I think Sacha’s idea was to get into Jade’s head and have a little bit of insight on what it’s like to actually be a burns survivor.

I don’t think many people realise the difficulties we go through. Yes, it’s a visual disability, but there’s everything that comes with it – the emotions, the looks, the staring, the name-calling, operations, all of that. People don’t know the background of that, so I think that was the whole idea of focusing on Jade.

I think you’re right that the court case would focus it on him and it becomes an ‘issues movie’ about acid attacks, rather than about this character. I certainly foind that refreshing.

VK: I’d just like to add that you see him now and you see him then. The way I see it is that Jade is trying to forget him, but he keeps popping up again.

SP: Yeah, he comes back to you in your nightmares and there’s almost still some sexuality there. That doesn’t end, in a way. It’s totally twisted, I think.

For you, Vicky, how much was this about raising awareness of burns survivors and the difficulties they face?

VK: It was a massive deal for me. I want people to just realise that they’re capable of doing anything they want. This stigma needs to end. I thought I’d only be good for horror films and things like that. But now I’ve got this far, I’m like “you know what? I can do it” and that’s what I want other people to think. It doesn’t matter what’s wrong with you. Just do it.

At my work, there’s a nurse who has cerebral palsy and another with Down’s syndrome. 20 or so years ago, you probably wouldn’t have seen that. Whatever you want to do in life, just do it. Just because people open their mouths, it doesn’t matter. 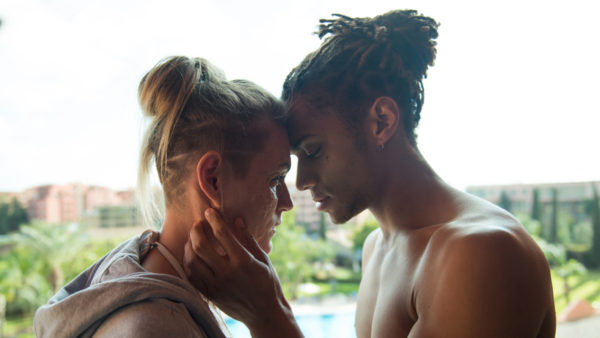 It’s absolutely inspiring and I hope that the film can help take down that stigma.

VK: I really hope so. Or even, for people that haven’t got burns, I hope they can have some empathy for people like me. A stare or a comment, or a nudge, could ruin that person’s day. I’m trying to not allow it to bother me any more. I’ve done my days of crying. I am who I am and, if you don’t like it, don’t look.

The insidiousness of those snide comments really comes across in the film. There aren’t many scenes where she’s outright abused, but there are loads of silly remarks that, for a victim, can ruin their day.

VK: Yeah, I had a hate website set up for me and some of the comments on there were like “the wrong person died in the fire”. I was in Southend and a group of grown men, not boys, walked past and went “hey, Freddy Krueger”. God forbid they have kids and anything happens to them. It’s adults rather than kids that need education. I think this film really will try to educate people.

Sacha, as a filmmaker making movies like this, how important is that educational side to you?

SP: I’m really happy that it can do something like that. For me, the most important part is to just make a beautiful film that touches many people in many different ways that I can’t even know about. There are films that I’ve seen that will stay with me for the rest of my life, so I just hope that this film touches people. 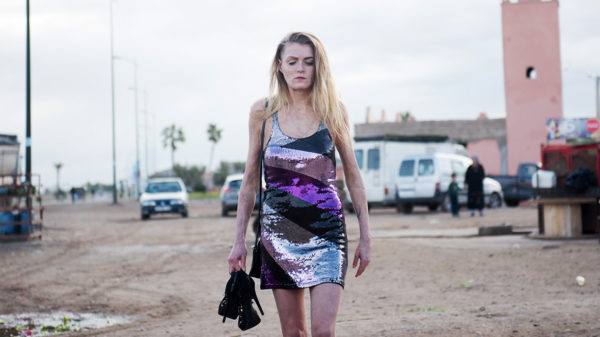 For both of you, as a final question, do you have anything in the pipeline?

VK: Yeah, Dirty God 2: Dirty Bitches! [laughs] I’d love to carry on acting and, if I could, I’d love to make another film with Sacha. Anyone would be lucky to work with her.

Get that on a t-shirt, Sacha! Thank you very much for talking to me.

Dirty God is out in UK cinemas from 7th June. 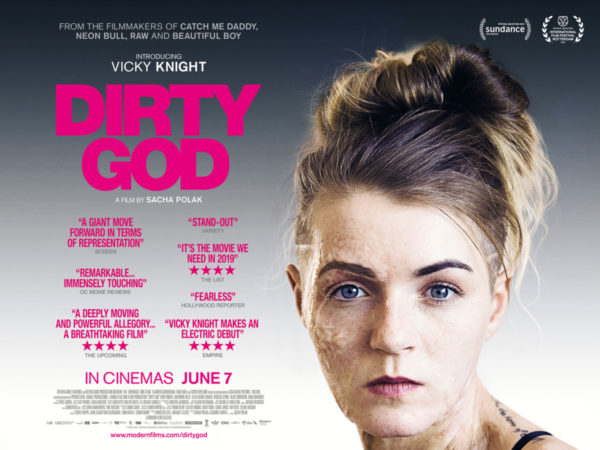