When BoomfireGames and JanduSoft thought about bringing their Pixel Art Platformer Furwind to the current-gen machines, they knew they were going to be scoring some classic ‘Retro’ points instantly with its appearance.  However, dropping this game into the hands of a player who lived through the years of real gaming has revealed something more than another title washed with the nostalgia brush. There’s a vein of real classic gaming coursing through Furwind and it won’t take long for everybody to find it.  Did BoomfireGames and JanduSoft plan for this too?  Of course they did!  But they sneakily distracted us with talk of Pixel Art… 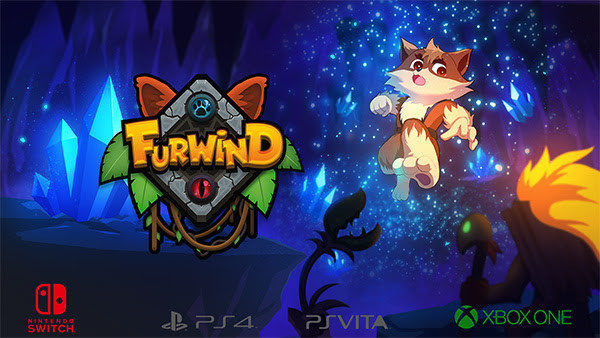 Furwind is a simple tale involving you, the most heroic of Foxes, being charged with ridding your once beloved forest from the clutches of ever spreading evil.  With developing skills opening up as you progress through the game and a scattering of different level designs, this latest release on the surface seems to be a simple affair.  Though, here lies the trap. You’ll see a pixel art fox, you’ll rapidly learn the controls and then you’ll make your way through the opening levels believing you’ve got this game worked out.  It’s at that point you will suddenly realise that the BoomfireGames are more cunning than the game’s protagonist.

Part of the true difficulty here actually belongs to a classic game from three decades back, namely Rick Dangerous from 1989.  Like Furwind, Rick Dangerous was extremely easy to walk into for you had excellent art and a basic control system, also both games also shared one big connection – namely, you needed a brilliant memory to remember the exact layout of the dungeons and enemies that wandered the corridors.  If you didn’t, and in Furwind’s case don’t, then…well you’re not going to be doing very well in either game. 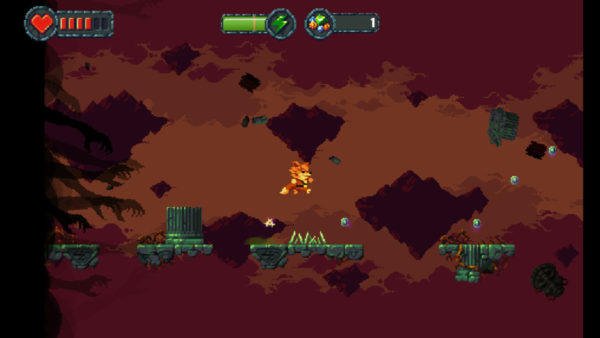 In the opening levels of Furwind you’re gathering gems and blundering around dungeons looking for who knows what.  Then as the levels progress, you realise as you’re chased through caverns, scaling up lava towers or fighting to free your foxy friends that you really need to remember every location and what inhabits it.  Not only that, but the gems you’ve been occasionally grabbing are actually vitally important! You’ll need them to upgrade your skills and rather horribly, spend your hard pocketed gems at a checkpoint, here to save you progress during a level.  What’s even more cruel is that every time you use a checkpoint it doubles the cost of usage!  On numerous occasions you will have to decide, ‘Do I save my progress or am I brave enough to attempt to finish this level – without saving – so I can leave with more to spend on upgrades?’.  I guarantee you’ll curse yourself five minutes after making your decision.

The level design seems to rotate and includes the likes of Lava Towers, Ruins and a terrifying chase level.  One of my favourite levels on the rotation – and at the same time one of those I dread – is the Dark Cavern. Here you rely on dwindling fireflies to light your path!  Not only do you need to navigate the dark cavern, dodging or defeating the denizens that patrol it, but you’ve got to do this whilst looking for firefly nests at the same time, for if they all leave you…well you’re in the dark. 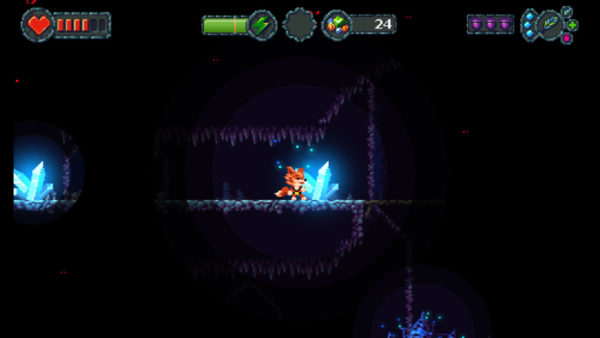 As you go further and further into each new level, the game introduces something every so slightly different. Perhaps a new enemy or a strange mystical platform, nothing overly taxing on initial arrival, but as you end up deeper within and you’re met with eight Zombie Wolves with only two special leaps left, but you clearly need three to complete this current level and it rapidly becomes apparent that perhaps this fox has bitten off more than he can chew.  Instead it’s off to pay a visit to a previous level and hope you’ve not forgotten the layout as you grab a few gems to upgrade your skills.  If you expect to finish this game off in a couple of hours with nothing more than charm and bravado, expect to have your gamers pride dented.  You’re going to have to be the ‘Top Fox of Furwind’ to get anywhere near the final few levels.

One oddity of Furwind however is the lack of lives.  You have a health bar yes, but when that depletes you get thrown either back to the start of the level or to the checkpoint.  Your foxy hero here is stuck in life, never allowed to truly die and the player will never see a “Game Over”. This being said, the amount of times I’ve ‘bit the bullet’ I wouldn’t be as far into the game as I am now, but still it does seem somewhat odd.  No lives, no Game Over, no Continues. Just live, die and repeat.

Furwind is a great platformer to pick up and add to you library of games.  Not only does it look splendid, but there’s just enough challenge found within to make you curse the sky with, “One more go!” over and over again (at 2am) until you beat the level and then of course, you’ve got to have a sneaky look at the next level before you leave…

Furwind is available on the Xbox One, PS4 & PS Vita (Cross-Buy) and Nintendo Switch. PS4 and PS Vita users can also purchase a limited physical release via EastAsiaSoft here.

This version was reviewed on the PS Vita.