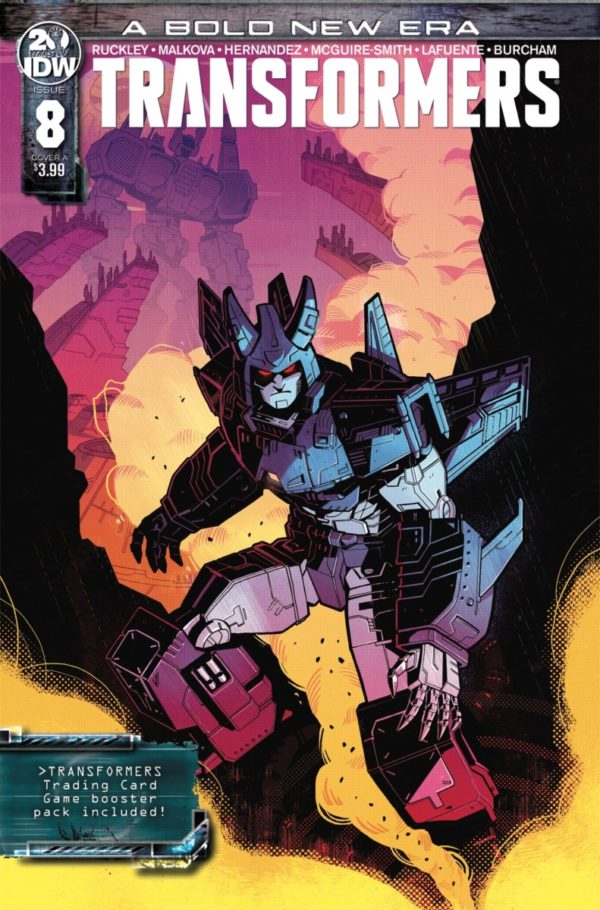 One of the common criticisms of IDW’s new Transformers series is the slow pacing its had since the second issue. Writer Brian Ruckley’s slow burn approach has been nice in terms of world-building, but when it’s come to the actual plot of Brainstorm’s murder and other story points, not much has really been advanced in any major way. The last few issues has seen the story pick up a bit, but Transformers #8 has a lot of momentum that really progresses the overall story with some exciting sequences and intriguing character work. It’s given the series a much needed jolt in the arm.

Picking up right where the previous issue left off, Cyclonus has come under attack from a pair of mysterious transformers. The seven page scene is an exciting one and the issue’s most memorable. Anna Malkova illustrates the fight and does a great job with the fluid choreography between the combatants. It really shows how tough Cyclonus is as he fights Flamewar and uses some ingenuity to escape Shadow Striker. One impressive aspect of the fight is how Malkova’s action flows between the panels as well. It doesn’t feel disjointed as it moves from panel to panel and even allows readers to imagine some of the actions that take place between them, such as Cyclonus picking up Flamewar’s discarded rifle. It’s a very smooth and focused action scene that Malkova does well with.

The fight even serves a larger purpose than a lengthy action beat as it ties in with Chromia’s own investigation into transformers who have suddenly gone off the grid. After several issues of Chromia and Prowl not making much headway in their investigations, Cyclonus’ fight has lit more of a fire under them. It’s nice to see these two threads come together and get some movement for the pair of detectives after their story hit a standstill even with Rubble’s own murder. The fact that Chromia will be given more to do in the next issue or two as she investigates the site of the attack is a good bit of progress and hopefully won’t slow down again.

The progress hit on more than Cyclonus and Chromia’s story too as we finally got to meet the often mentioned Termagax, a mentor to both Megatron and Orion Pax and, more significantly, the founder of the Ascenticon movement Megatron now leads. For many issues now, it’s been unclear just who she is or what happened to her, but Ruckley reveals she’s simply become a recluse who is uninterested in the day-to-day operations of Cybertron now that its society has isolated itself from the galaxy along with putting a cap on energon supplies and population. Megatron and Termagax are written well with the former proving to be quite a stubborn and interesting character. As is usual from him, Ruckley continues to world-build through their scene, not only giving more insight into the Ascenticon’s beginnings and goals, but also name-dropping some significant transformers both old and new. While it’s good to finally meet Termagax and discover more about her and Megatron’s reasons for speaking out, the one downside is that we still haven’t actually seen any of the problems they want to change. We’ve only been told by them how Cybertron is suffering rather than see it for ourselves. Transformers #6 did a great job showcasing Megatron’s growing resentment to the new order, but aside from that there hasn’t been that much time devoted to showing the problems Cybertron faces or why so many people, Bumblebee included, don’t trust the Autobots right now.

The art is split between Malkova, Angel Hernandez and Beth McGuire-Smith. Again, Malkova’s art is the best of the issue as she depicts the fight Cyclonus is in while McGuire-Smith does a good job showing the shock Chromia, Prowl and Froid have seeing Cyclonus crash into Autobot headquarters. She utilizes the body language between all the bots well for a pretty crowded scene while Hernandez’s discussions between Megatron and Termagax and Bumblebee and Elita-1 provide a fair amount of detail for bots just having an extended talk. The colours from Joana Lafuente and Josh Burcham are quite vivid, particularly in the opening fight. It all adds up to a pretty good looking issue with great movement and character work.

Transformers #8 has added a lot of much needed momentum to the series as some of the stories come together in some big ways. With Megatron hinting that he and Soundwave have some secrets planned and the impending arrival of Sentinel Prime and Starscream, along with Chromia’s investigations ramping up, hopefully we’ll see the series pick up even more speed with the next few issues.