Tom Jolliffe takes a look back at Paris, Texas… 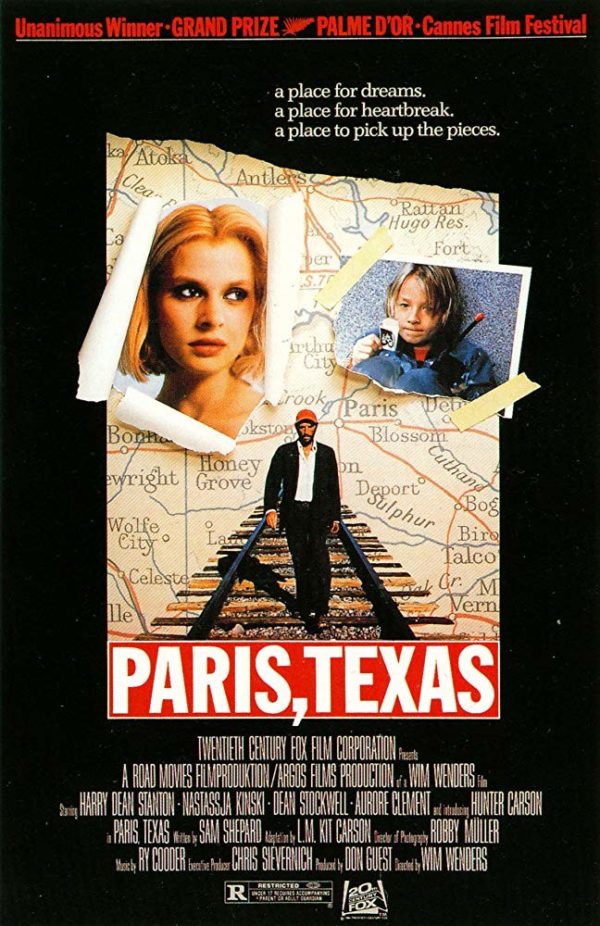 A drawn out, gut-wrenching, beautiful scene, lasting all of 10 minutes has not long ended. A resolution and re-connection has come and gone, and then we’re left with Harry Dean Stanton in a carpark. He’s swamped in green light. He drives off, and just like every other time I’ve watched Paris, Texas…I’m destroyed.

From director Wim Wenders and writer Sam Shepard, we open on Harry Dean Stanton (in a rare and welcome leading role) as Travis wandering through the Deep South American desert with no memory. After collapsing at a remote pit-stop his brother is called. Travis, missing for four years was presumed dead. Walt (Dean Stockwell) travels out to pick him up and bring him back to connect with his estranged young son Hunter. Travis’s ex, Hunters mum has long been gone too. As Travis tries to rebuild his memory and life, and connect with a son who has no memory of him (and pretty much vice versa) the lingering memory of Jane (Natassja Kinksi) plagues him. Walt is frustrated at Travis seemingly withholding information. Soon, when Travis gets word of Jane’s whereabouts he takes Hunter on a quest to find her. When Travis finally finds her, he re-opens old wounds and comes to a crushing realisation. 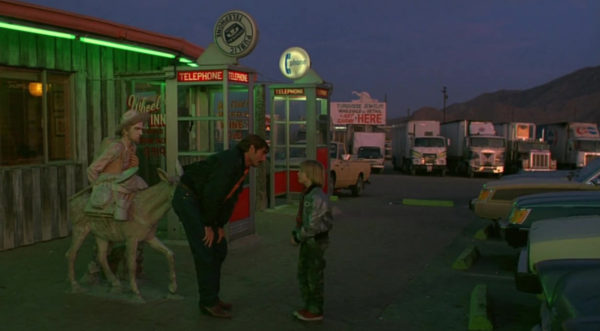 From the moment the film opens, as the drawling, almost improvised/instinctively played slide guitar begins to envelope the soundtrack (courtesy of Ry Cooder) to accompany Stanton’s desert wander, we know we’re in for something different. The film is languid, thoughtful and quiet. So much of Stanton’s character is introspection. A character fighting to open memories he’s cast aside for a reason. To Hunter, having been given his father back, the innocence of his desire is simple; he wants to reconcile his parents. The reality is never that simple.

The beauty of this film is subtlety. Shepard doesn’t hammer home that Travis has an alcohol problem, but we see moments and get that sense. The film opens with Travis long post breakdown. The more those fragments come back together, the more he realises he’s repressed a darker side of his personality. For those that have seen the film, the culmination of course, comes in Travis, usually stoic, mostly silent, delivering a lengthy confessional monologue. Like everything about the film, it’s beautifully written and it’s exquisitely performed. It’s not merely Stanton in those scenes either. Kinski may only appear in the film toward the end, but her impact is immense, and her counter monologue is equally as beautiful. At the centre of two damaged, flawed characters who found each other and had a beautiful but ill-fated relationship is an abandoned son. 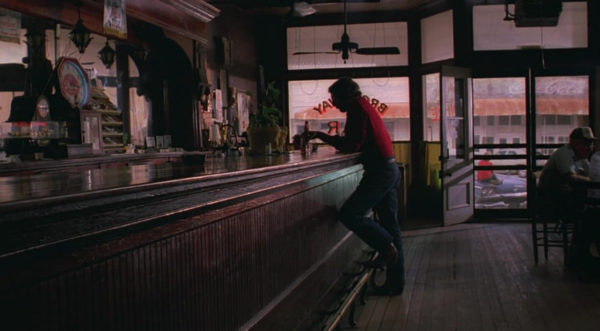 This odd little road-trip bookend of a film is uniquely un-Hollywood. A German and French co-production (with Channel 4 involved too) it’s a beautiful painting of America and a complex look at two broken inhabitants. Wenders who’s made some wonderfully introspective cinema (most famously, this aside; Wings of Desire) just orchestrates everything beautifully. It’s all wonderfully blocked. It’s beautifully shot by Robby Muller and the production design is vibrant in colour. Reds and greens in particular just pop out the screen either in lighting or costume or mise-en-scene. That aside with a generally warm high contrast palette. With the drawn out pacing and distinct framing the film at times looks like a collection of evocative paintings. It’s not technicolor, but it almost feels like it in places. Ironically, Muller also shot another cult film with Stanton the same year. Entirely different in tone and genre, but just as odd…Repo Man. That film has similarly vibrant colouring (including strong Greens). 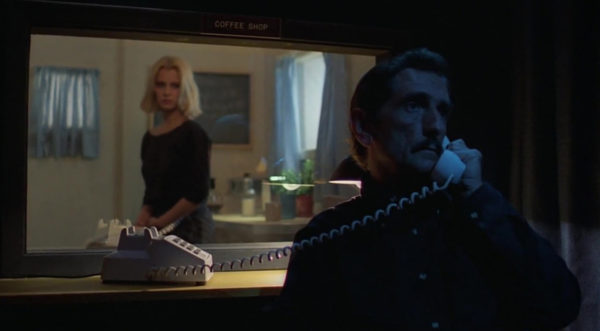 Paris, Texas struck with critics. Along the way it picked up a nomination at the Globes (in the foreign film category), a few Bafta nods, and won the Palme D’Or at Cannes. It never found a big audience on the big screen. It’s every inch the Indie film but over 35 years since its release it continues capturing audiences. It’s a regular placing in those essential/best of/films to see before you die lists (guilty as charged). Some films feel inherently their own entity. A little piece of magic that no other has quite managed. You can look at Gladiator, it’s great but it rings a similar tune to other Ancient Rome epics. It’s a formula. Likewise War films, classic horrors etc. Some films create almost their own sub-genre. Some may try to recapture that, but rarely do. I think of something too, like Withnail & I. Wildly different in tone to this but with this unique DNA. It has a pure simplicity in plot to place beautifully written characters with underlying tragedy behind them. 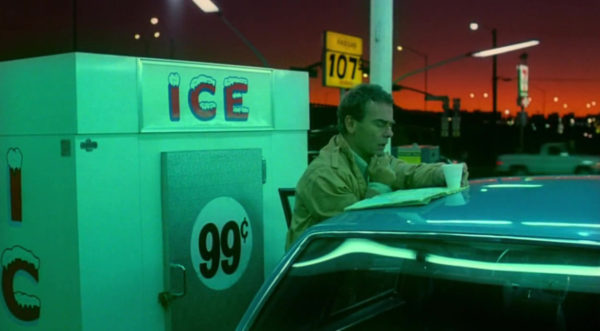 For anyone who looks at Hollywood’s pre-occupation with formula and desires something different, if you’ve not seen Paris, Texas, it is essential. It’s veritable how to on photographing a film, on directing, on scoring in an unexpected but effective way and particularly a great go to for actors looking to be inspired. Hell, if you need a great monologue for a video audition, look no further than this. Be warned though…you will come a distant second to Stanton, one of Hollywood’s great unsung maestros. The performance of his lifetime and a showcase for character/talent over looks/marketability.

Paris, Texas is currently available on Prime and through the BFI player if you’re subscribed.