Short on time and heavily visually impaired, a police detective recruits an Uber driver to escort him across town on the hottest day of the year, following clues to lead them to a notorious criminal. 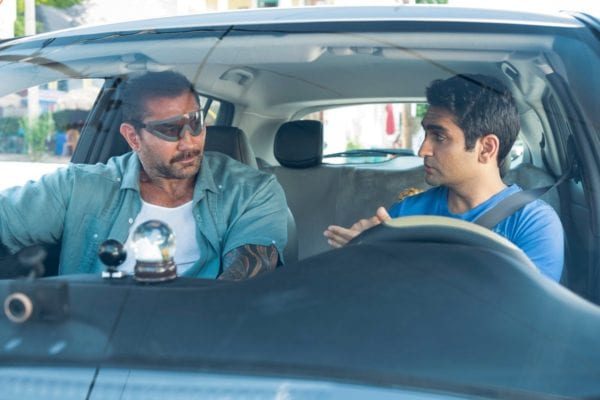 “Who parked a boat here?” Is it fair to say that Dave Bautista has made the brilliant transition from pro-wrestler to one of the big screen’s funniest new faces? Trading in his MCU tats and knives for a police shield, Bautista plays up the unexpected laughs in the latest feature from director Michael Dowse. On a mission to take down an infamous drug lord, Tedjo, who killed his partner just months earlier, what could possibly stand in Detective Vic Manning’s way? A pesky eye operation provides the stimulus gimmick for Dowse’s film, leaving Vic’s vision compromised. Enter Kumail Nanjiani as eponymous Stuber, so called for his job as, you guessed it, an Uber driver, whose name is Stu. Desperately trying to save enough money to co-finance a women’s only spin studio, Stu works two jobs and is hopelessly in love with platonic friend Becca.

From the beginning, writer Tripper Clancy sets up two characters wonderfully at odds, a recipe for 90 minutes of good fun. It is somehow highly reminiscent of the dynamic from Die Hard 4.0: the tough, relentless cop having to rely on a more nervous, certainly not combat ready civilian. But played more for comedy, Clancy delivers a script packed with requisite wit, playing sometimes hilariously on the temporary blindness conceit. Nanjiani is typically excellent in one liners and in full millennial mode, but confusingly considering the title, Bautista is the real star. Delightfully sending up the muscly, gruff voiced brawlers whose footsteps he follows, Bautista’s comic timing and sense of fun is on point throughout. The two stars deal well with the situation, but are let down by the second half of Clancy’s script, which fails to deliver on its premise. Certain predictabilities probably meant as twists are seen a mile off, and character growth is painfully condescending. The conflict between Vic’s macho alpha and Stu’s soft beta comes to a head when they disagree about what it means to “be a man”, both of them learning to take a small leaf out of the other’s book. It feels more than anything like a lesson no one asked for – this film could have done much better from ignoring the Hollywood rule book for comedy. In its attempt to be an action film, Stuber is enthusiastic in the opening, but quickly resigns from trying. Dowse settles for quick edits in fight scenes that show nothing, and fails to provide a worthy set piece that could be considered impressive. With Iwo Uwais among the cast, it seems a criminal shame not to choreograph something eye catching.

What is most pleasing about this film, perhaps, are the future possibilities it presents. Clancy’s writing shows promise, even if it is a little distracted here. Nanjiani just needs a tad more serious, meaningful content to become one of this decade’s best tragi-comic actors. 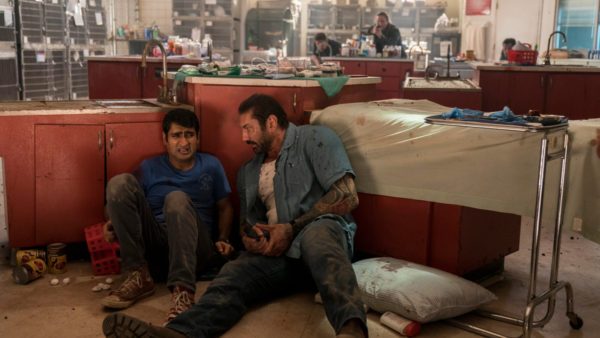 And best of all, Bautista proves himself once again as worthy comic talent, very welcome to repeating similar performances – so long as they remain tongue in cheek. Dowse’s film knows what it is, and doesn’t try to be anything more, which is so alienating when it is clear that it could be. All the components for success are present, but Stuber isn’t quite the right vehicle for anyone involved. Suitably funny, and an undeniably easy watch, Stuber leaves you wanting more. Not more of the same – more from the filmmakers behind it.