A sleepy, rural American town falls victim to hordes of rampaging zombies, while a group of rather lazy cops try to resolve the increasingly deadly epidemic. Zombie movies are everywhere, all the time. Of the myriad sub-genres available under the blood-splattered umbrella of ‘horror’, the zombie film is the most malleable to various tones and themes. George Romero, alone, used his iconic zombie stories to make arguments about a wide range of topics, from the undeniable racial undercurrent to Night of the Living Dead to the scathing consumerist satire of its sequel Dawn of the Dead. Next to step up to the plate is Jim Jarmusch, and The Dead Don’t Die is as idiosyncratic a zombie film as you’d expect from such a unique filmmaker.

For better or worse, this is a zombie film with a difference. Unfortunately, there’s considerably more ‘worse’ than there is ‘better’. Bill Murray and Adam Driver play cops in the small town of Centerville – “a real nice place”, as its welcome sign puts it – dealing with a bizarre local hermit (Tom Waits) and a series of minor problems. One morning, they discover the mutilated bodies of several staff at a local diner, with Driver’s Ronnie immediately suggesting that zombies might be to blame. Soon, his suspicions are confirmed and everyone realises that they’re going to have to start chopping off heads to survive.

The Dead Don’t Die might be the first zombie movie to actually suffer from the arrival of the undead. Jarmusch’s first act is a well-engineered feat of almost-comedy, with a handful of meta quips – mostly about the enjoyable title song from Grammy-winning country crooner Sturgill Simpson – benefiting from the mumbling quiet of both Driver and Murray’s on-screen personas. Tilda Swinton, too, wins laughs as a Scottish undertaker who loves a samurai sword or two and Steve Buscemi is good value as a racist hick with a red cap, declaring his desire to “Keep America White Again”. 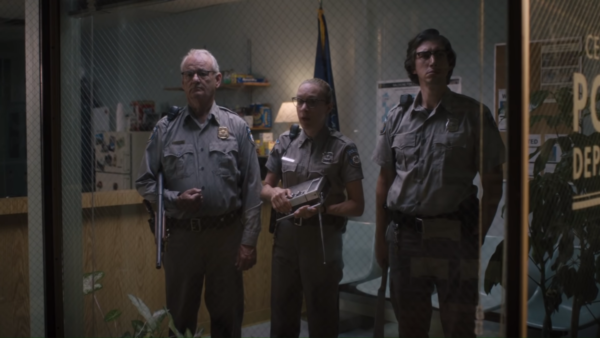 However, once the zombies show up, the wheels come off completely. The bizarre characters simply wander around talking about all of the usual zombie movie things, with most of the quirk shaved off them entirely – except for Swinton, who is immune to such things. For much of the second half, Jarmusch guides the audience through an array of tedious set pieces in which zombies – for some reason full of black, wispy gas rather than sickly satisfying blood and guts – and humans simply wander about doing very little. The final scene is almost certainly a deliberate anti-climax, but it’s one that ensures the film ends with a whimper.

There are smatterings of ideas at play throughout The Dead Don’t Die, but they’re lost amid the languors of the plot. The apocalypse has been brought about as a result of polar fracking, and there’s a steady stream of energy company bosses appearing on TV and radio to dismiss the warnings of “so-called scientists”, but nothing ultimately comes of this. Elsewhere, there’s a gag about how the zombies still want the things they wanted while they were alive – coffee, wi-fi, chardonnay, etc – but this never gets beyond the ideas already advanced in Dawn of the Dead. The Dead Don’t Die is at its absolute best when it’s a slightly strange buddy cop movie with a meta edge, in which Adam Driver skids into car parks in a scarlet, convertible Smart car or reveals he owns a Star Wars key ring. Jarmusch, however, seems caught between his own, unique style and the needs of the zombie movie, which demands a certain amount of macabre bloodshed and action. By the end, it’s difficult not to find this a little bit of a snooze. At least the country song is good.