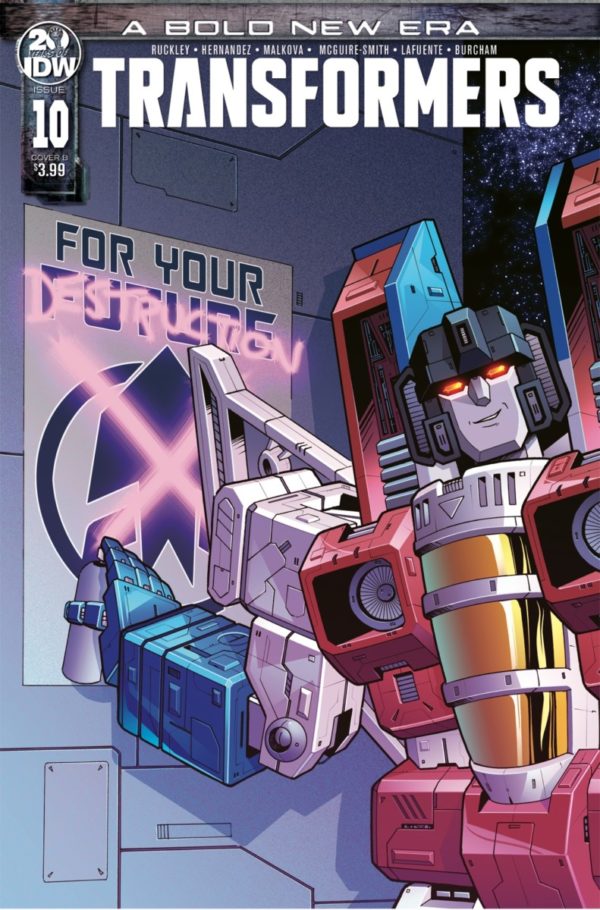 Brian Ruckley has really been putting momentum on his Transformers series these last few issues. Transformers #10 ups the ante in some big ways as the true leader of The Rise is revealed. Things are moving along pretty quick as Ruckley continues some interesting and compelling takes on these classic characters.

Unlike the previous two issues, Transformers #10 is a mostly quiet affair as several characters take in the aftermath of the Autobot raid on a Rise base. However, the discussions that are had move the story along pretty well as tensions rise to a point they’ve never been before and focus on the characters reactions to recent developments. From Bumblebee and Elita overlooking a silent protest to a contentious senate meeting, Ruckley does a fairly good job conveying the stress the characters are under. The senate meeting between Orion, Megatron and others was a nice look at just how fractured Cybertron’s ruling body currently is and how they’re so ill-equipped to deal with the crises facing them. It’s no wonder why Cybertron’s population is so riled up and Sentinel Prime – who finally returns at the end of the issue with Starscream and Nautica in tow – is apparently so angry with everything that has happened.

The developments go even further as Megatron is revealed to be one of the founders of the Rise (surprise surprise). While this isn’t exactly shocking for obvious reasons, Ruckley does slant the obvious twist by revealing the Rise is actually being run by Shockwave after Megatron brought him back from exile and helped him take over the movement to sow enough disorder to allow him and his Ascenticons gain a bit more political power. It was a surprise to learn Megatron was not happy with the Rise’s recent actions, including the murders of Brainstorm and Rubble, as it showed a Megatron less inclined towards violence as a means to an end. Ruckley’s take on Megatron seems a bit closer to his Generation 1 portrayal at least in temperament – quick to anger, very emotional and not always rational. It’s nice to see these elements of Megatron’s character on display as the previous IDW continuity focused so much on him as a cold tactician and presents a more interesting arc for his character as it seems he’ll unintentionally cause a war. It makes his statement to Orion about the need to be careful of ideas for fear of turning into weapons all the more ironic, especially as it seems Shockwave has his own plans.

Megatron was the star of the issue as nothing else really happened. Bumblebee and Elita had a nice chat and got in on some action as a bit of the protest got out of hand while Cyclonus and Froid reacquainted themselves, along with new information regarding Pyra Magma’s imprisonment. Ruckley displayed the tension between characters and groups in some subtle and not-so-subtle ways. Even 10 issues into the series, Ruckley continues world-building in some effective ways, but it also shows the strain in others. One of the most prominent aspects to his story is how the Nominus Edict has, according to Megatron, stripped Cybertronians of their potential and led to the exile of many bots. However, we still don’t know what exactly the conditions of the Nominus Edict are or why bots like Shockwave were exiled in the first place – or if they even were as Orion seems to believe no one was exiled. With the tension among the planet and its ruling council so high, some further backstory into what is truly driving this conflict is very much needed. That said, Ruckley has still conveyed the most urgent problems well enough as Megatron’s plan seems ready to backfire on him.

As is the norm, the art is divided between three artists with Angel Hernandez, Anna Malkova and Beth McGuire-Smith on art duties. Their combined art conveys how the stress of everything is bearing down on the characters through their body language and facial work. McGuire-Smith steals the show during Megatron and Shockwave’s confrontation as the soon-to-be Decepticon leader radiates anger. Joana Lafuente and Josh Burcham provide some vivid imagery through their colours. Whether its through the council meeting or the huge Cybertronian crowd, the colours fit each scene very well.

Though more backstory is needed to help convey the full scope of the coming conflict, Ruckley elevates the overall story with the reveals he makes in Transformers #10. His character work on all the bots, particularly Megatron, is interesting and the artwork from Hernandez, Malkova and McGuire-Smith nicely conveys the characters emotions. With the return of Sentinel Prime and Megatron’s plans getting a bit too out of control, Transformers is certainly entering a compelling stage of its story.