Over the phone and on good form I had the pleasure of speaking to Julie Ann Emery recently about everything Preacher, whilst seguing subtlety into the arenas of Better Call Saul and Joseph Heller adaptation Catch-22 which recently aired on Channel 4. 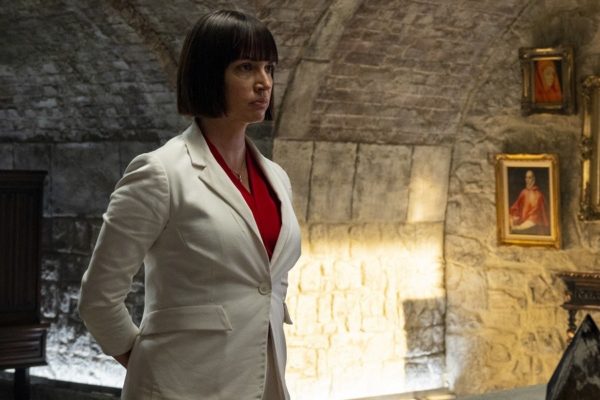 How were you approached to be in Preacher?

I auditioned, it was the middle of pilot season in the US so lots of scripts were coming across my desk and I was reading enormous amounts of material, in this time period in the US January February when it’s kind of a grind. When I read Featherstone she was absolutely unlike any of the other women I was reading for characters. I immediately went after it as hard as possible. I auditioned fairly late in the process but I think it evolved what they were looking for in Featherstone. In this show Featherstone is a little more three dimensional than she is in the comics. They have kind of expanded all the women from the comics which I think is smart. Women in the comics in the Nineties were a little pigeonholed and two dimensional and I was thrilled they did that. So I was hired on a Friday evening and I moved to New Orleans on Tuesday to start shooting.

Yeah, and I was shooting something else here. I wrapped on that Friday and it was fast but I am super grateful. We just wrapped on the final season (of Preacher) and I’m worried now how I will ever find a character half as interesting as Featherstone to play. So I am hoping for a non-boring female character to come across my desk.

So in terms of the role was there anything specific which attracted you to it, or did it just expand as you said over time while you were doing it?

I think both things happened. When I auditioned, that first episode for Featherstone (S2 Ep 3) I’m more of a jazz singer for most of the episode, so the audition material involved sort of transforming in the room between Lara the jazz singer and Featherstone herself. So that’s very attractive to me, I love the idea of transformation and I like my characters to be wildly different from each other project to project. And the idea I can have multiple characters wrapped into one role was insanely attractive to me. Also Featherstone is a very action driven woman which is what I always looking for in characters, so when I was cast I approached Sam Catlin our showrunner and asked him if we could make Featherstone as capable at creating a character as I am. Can we make her almost diabolically good at becoming another person which I thought would be more interesting, but if Featherstone ever met any of her other personas in life she would be highly judgemental. Like the jazz singer she would consider very slutty and judge her sexually, or Jenny the neighbour is very weak and I just like the idea that she can step into the skin of someone she has just met. 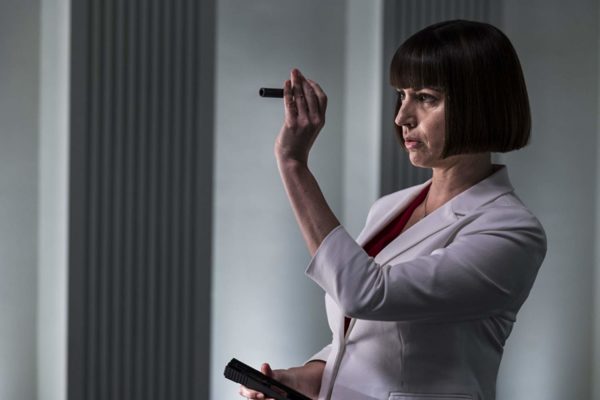 Considering the subject matter is a little bit contentious and controversial, did you have any reservations about it?

I did not have reservations about it and we push every boundary there is to push on television. I don’t think there has been anything like Preacher on television and now we have other shows popping up like The Boys and American Gods that I think maybe owe a nod to Seth and Evan and Sam and AMC due to Preacher’s existence. And I don’t think we would have taken those steps with those other shows and I’m thrilled to see that happening.

I’m from a small town in Tennessee and before season two started airing I did send an email out to my family. And I’m from a very religious town and said ‘you don’t have to watch, Preacher is not everyone’s cup of tea, its okay. You can just be happy for me that I have a great job, playing a great role and that’s okay’.

Look past everything else .

That’s right. They are very loyal and watch everything I do and I do have an aunt who goes to my mother’s house after Preacher airs and they only watch my parts. So my aunt Caroline has only seen Preacher from Featherstone’s point of view. Which I think is kind of fascinating because I don’t even know Preacher from Featherstone’s point of view. I read the full script so I see where I fit and everything but so I did sort of warn my family who I thought might have a little trouble with the subject matter. I think art is supposed to push our boundaries and with television and film if we are not going to do something compelling which is going to make people think. That maybe gives them some sort of emotional reaction what are we doing here? 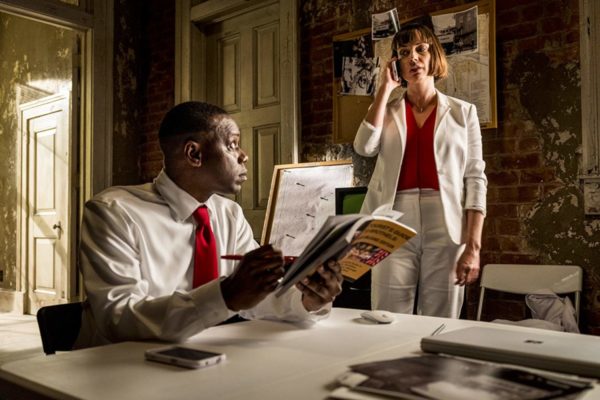 What makes Featherstone unique compared to other roles in Better Call Saul or Catch-22?

So I have been really lucky in the last four or five years to play really interesting women. Even Marion in Catch-22 who seems like one sort of thing on the surface and has something else going on underneath. She is an interesting character and she is trying to regain agency over her life by using her body in the nineteen Forties in time when she didn’t have choices as a woman. I think my favourite thing about Featherstone is she does not care whether people like her. She is unapologetic and there are not a lot of women written like that. She is completely unapologetic, she never takes care of any man in the room except Herr Starr who is idolises and loves in a sort of cult like way. But I love that she is unapologetic, I love that she has her mission, she has her goals and is unapologetic about all the stuff she does to get it. You could talk about how Featherstone is different from other roles fifteen ways from Sunday, but if you want to name one thing it is she is unapologetic for her own ambitions, beliefs and actions.

In terms of the dynamic between yourself and Pip Torrens (Herr Starr) how did that work?

It is going to get much more interesting in season four. The dynamic between Featherstone and Starr really goes to a whole new level. I’m really excited for people to see it; myself and Pip had a wonderful time navigating season four between our two characters. Pip is a lovely guy and we get on great and he obviously a brilliant actor and I’ve been an admirer of his work for quite a long time. It’s a lovefest between the two of us off screen, we really enjoy each other’s company, we hang out and our spouses hang out. He is such a good human being and the opposite of Herr Starr in every possible way.  And we’ve grown protective of each other’s work even, when we have been rehearsing or working together over the last three seasons, we kind of anticipate what the other person is going to need or want in a scene before we come out of rehearse and start shooting. It’s been a great pleasure to share the screen with him. 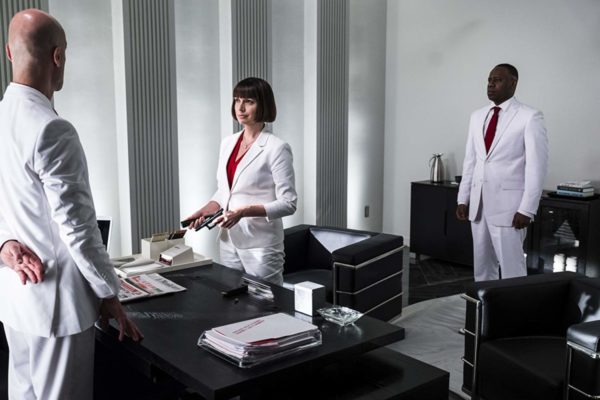 Do you feel under pressure to honour the comic book creation at all? Considering Preacher has such a devoted fan base.

Preacher has a very specific fan base, right, they are no casual Preacher fans. Both of the comic and of the show and I learned that very quickly after I was cast. People are very dedicated to it and the show, I think, is very true to the spirit of the comics but we change some things with Garth and Steve’s blessings. I deal with it better now. Before season two started airing I had a lot of anxiety about how people were going to perceive certain stuff. Featherstone at her heart is straight out of the comics but they run with her in a much bigger way. In comics she more located in the office and the badass aspects of Featherstone are missing from the comics. She doesn’t carry a gun, I kill a lot of people, I kill a lot of people in season four. The relationship with Tulip is not necessarily there in the comics and I am thrilled that the show has run with that. Season four is going to continue that relationship as well and the fans are all so generous on social media and very interested in chatting about it and no one has been unkind.

So would you say the expansion of Preacher for television has been influenced by the Breaking Bad alumni of Sam Catlin and Michael Slovis?

Whenever anyone asks me to describe Preacher I always say it’s a combination of Seth Rogen and Evan Goldberg’s off sense of comedy coupled with Sam Catlin who came up in the Breaking Bad world with his deep sense of character and drama. A place where those two things which don’t seem like they should happily meet happily do. So I came almost directly from Better Call Saul straight into Preacher where that sensibility where you roll out character in a deep way and sometimes slow way has really benefited Preacher in a big way. It makes it not your normal comic book show. We don’t seem, look or act like any other comic show on television.

I don’t think there is any television show like it to be brutally honest.

And a lot of that is owed to Sam and Michael Slovis and coming from the influence of that sort of deep dramatic world. No matter how outrageous the scenario of Preacher as an actor you are required to actually put yourself in the moment in a grounded way. 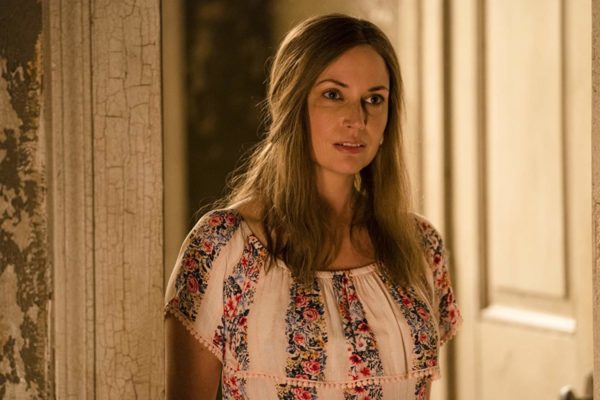 So if you had to describe Preacher in three words what would they be?

I’ll do it in two, absolutely nuts. I mean if you don’t want to see something that’s nuts you’re not going to stick with Preacher.

Considering Lara has become more prominent over the last two seasons what can we expect this time round?

If you Julie had to have a dinner date with either Jesse Custer or Herr Starr which one would you pick and why?

Well I think Julie would pick Jesse Custer because you know having a power like that is fascinating enough and I’d want to know about it. And frankly if Julie sat down with Herr Starr I would probably say things to him which would get me shot.

And finally what’s your idea of a perfect Sunday afternoon?

My idea of a perfect Sunday afternoon would involve a little grilling, a little college football and just some quiet time with my husband. I normally go to the farmer’s marker on Sunday too.

Many thanks to Julie Ann Emery for taking the time for this interview.