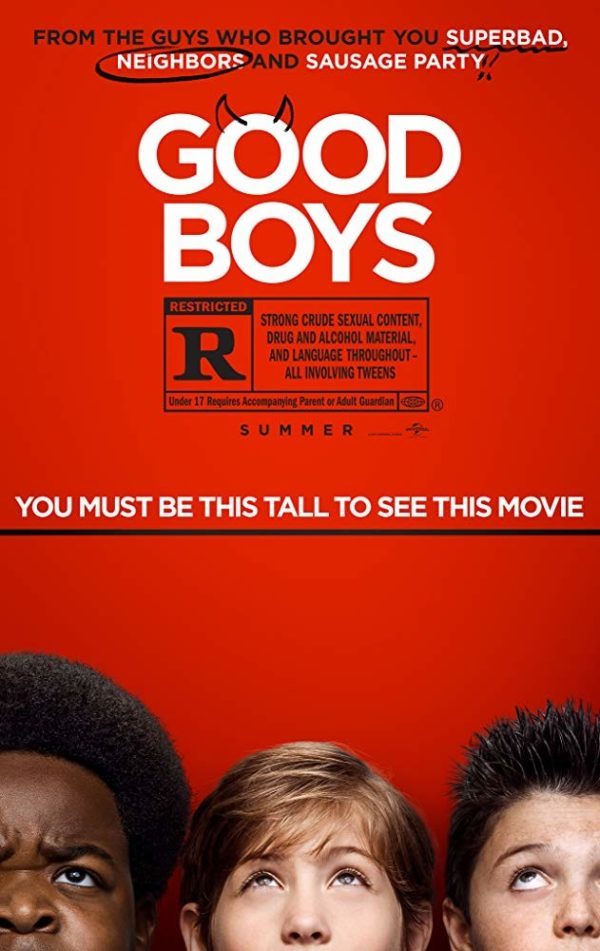 When sixth-graders Max (Jacob Tremblay), Lucas (Keith L. Williams) and Thor (Brady Noon) get invited to a kissing party, they embark on an epic journey of discovery that takes in drug-dealing, beer drinking, angry teenage girls, and a test of their friendship.

Good Boys graduates to cinema screens in the wake of Olivia Wilde’s film-of-the-year contender Booksmart. Perhaps the comparison is unfair: this is as broad and crude as that film was subtle and sweet, but it does itself few favours. Using ‘Nobody Speak’ by Run the Jewels during a prominent part of the movie, but in a less effective way, and casting Will Forte as an awkward parent, only underline that stark contrast. It feels like someone has copied the smart kids homework, but the only amendments made has been to remove all of the good stuff.

Judged on its own merits, Good Boys feels like an offshoot from another film. One in which Seth Rogen (on Producer duties here) and his crew have visited the Zoltar machine from BIG and turned themselves into a profanity spewing, smart-mouthed bunch of sixth-graders. If that had been the premise then this might have worked. Instead it feels like what might happen if the world of Bugsy Malone was given a sex-comedy sequel.

All of the kids speak like adults, in a wise-beyond-their-years heightened fashion, which is amusing for a while, but soon begins to grate because it doesn’t provide any substance to their characters. Remember in Sausage Party how it was funny to see food products say “fuck” for the first few times before it quickly became tedious? Well, copy and paste that criticism here.

Having said that, there is at least an attempt to make the puerility meaningful with a final reel message of friendship, which culminates in a very funny rendition of “I want to know what love is”, but the soundbite-spewing characters have barely earned it. Good Boys redemption can be found in the efforts of its roll-call of young actors: Jacob Tremblay is magnificent, appearing to fully embrace the opportunity to go all Tony Montana in a couple of scenes, but he also brings that intrinsic sweetness which has been present throughout his career-to-date. His straight-laced put-downs of his peers are delivered with perfect comedy timing. Ditto Williams, who’s the real breakout here. He gets some barnstorming punchlines to hit-home.  The Booksmart osmosis continues with Molly Gordon, who is terrific as one of the older students caught up in the boys’ increasingly ridiculous situation. Her appearance throughout allows the film to breathe, bringing a more sardonic style of comedy to dilute the frantic excessiveness of the tween’s exploits.

That hyperactive default-setting translates to the ratatat nature of the way the set-pieces unfold over 90 brief minutes, but it does at least mean that among the familiar narrative beats lifted directly from the likes of Bowfinger, or this film’s forebearer Superbad, there are some laughs to be found. Most notably there’s a wonderful send up of MAGA-style frat-boys that provides the films biggest belly-laugh, while Stephen Merchant pops up to deliver a winning cameo.

If preteens repeatedly (and it’s important to emphasise the word ‘repeatedly’) handing around sex-toys to each other for laughs is your thing, or the idea of hearing these gifted young actors throw F-bombs around to numbing effect makes you giggle, then Good Boys will have you rolling in the aisles. Unfortunately the rest of us will be running up them towards the exit.