“How do we get ahead of crazy if we don’t know how crazy thinks?”

This is the central question behind Netflix’s original drama Mindhunter, a series based on real life events and characters, a series that delves into the formation of the FBI’s behavioural sciences unit. Mindhunter has an awful lot going for it, and what has been achieved here is nothing short of masterful. Forget best Netflix show of 2017, Mindhunter is up there with the streaming services greatest ever efforts period.

Melding the best elements of two television formats, procedural and serial, Mindhunter (based on true events) follows two FBI agents who hope to understand what motivates humanity’s worst to do exactly what they do. This show is a study in the fragile nature of the human mind, and the results are outstanding.

So, what’s so good about it? What makes Mindhunter a perfect illustration of everything TV can and should be? Let’s take a little look. 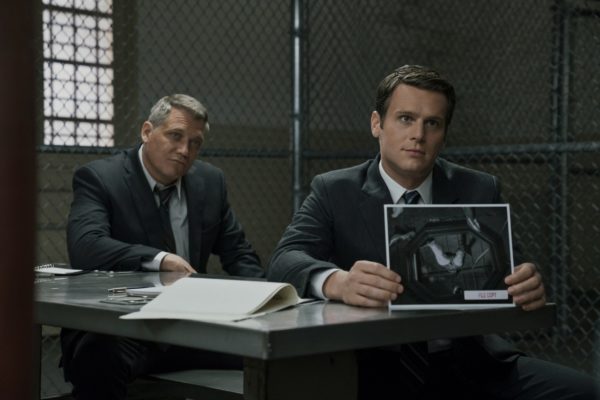 With nearly half of the episodes directed by master filmmaker David Fincher – who also executive produces the series – there is a cinematic dynamism permeating Mindhunter that so many try to replicate but can only fall short of.

Fincher is an expert in macabre and intricate tales regarding psychopaths and serial killers, with Seven, Gone Girl, The Girl with the Dragon Tattoo, and his masterpiece, Zodiac, punctuating his CV. One only needs to catch a frame of Mindhunter to know who was behind it and the series can now be added to some of the best work the acclaimed director has ever put his hands on.

Ah, the great Netflix defect, so much of its original programming has been hampered and spoiled by three too many episodes, a problem particularly noticeable in its superhero content. Netflix seem to be learning, however, the thirteen episode season isn’t the rule anymore, and their content is all the better for it.

Mindhunter season 1 comes in at ten episodes long, the perfect length for modern day prestige TV. Of course, a season needs to contain the appropriate amount of story and plot to cover its episode allocation, and thankfully Mindhunter executes on this in near immaculate fashion. The season flows like a dream, it never lags, it never drifts, it’s over in a flash but only because the viewer is so engrossed in the story it weaves. This is how you assemble a season of television. 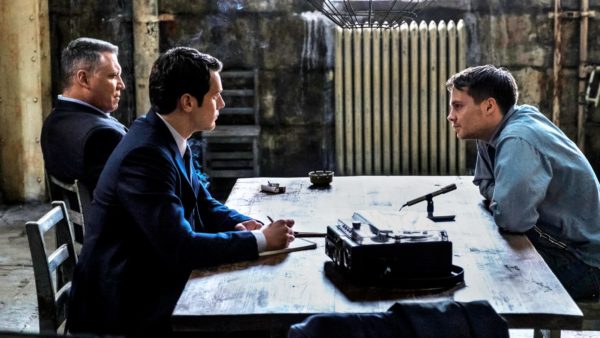 We love true crime as a people, we do, it fascinates us, perhaps in a way that wholly fictional content never can. There is something about knowing that events actually happened, that these people were real (or based on reality), and that the world depicted on our screens could actually exist outside our doors. This real-life element to Mindhunter adds a thrilling dimension to the show, encouraging viewers to research actual events after witnessing the dramatised version contained within the series.

Based on two real life FBI agents who toured 70s America interviewing some of the country’s most disturbed and violent real-life psychopaths, Mindhunter brings their story to life, along with fascinating insight into how the FBI had to relearn everything they knew about catching serial killers (a term that didn’t even exist as the show begins), realising that the mind of the psychopath is the key to preventing future atrocities from taking place.

The result is Mindhunter arguably becoming the most fascinating drama Netflix has ever produced.

The performances and characters

There is no weak link in Mindhunter’s disturbed makeup, this is a show that’s design hinges on every element holding equal value. The music is a joy, the cinematography is draw dropping at times – one can forget that this isn’t a feature length movie – but none of this matters if the characters that populate the world, and the actors that play them, don’t show up to the party.

Fortunately, no such problem exists for Mindhunter. The entire cast is uniformly excellent, with a special mention reserved for Holt McCallany’s Bill Tench (Robert K. Ressler in real life), one of our two leading FBI agents and the most likeable character in the show, even with his human flaws. But Mindhunter is ultimately Jonathan Groff’s show, who hear plays Tench’s new partner, Holden Ford.

Ford is based on John E. Douglas, the man responsible for catching some of the US’s most notorious killers and unlocking the minds of various incarcerated real life villains. His book is the basis from which the show was adapted, and Douglas has been the inspiration for other fictional characters such as Jack Crawford from the Hannibal novels and the Hannibal TV show’s depiction of Will Graham. It’s not hard to see why, and Groff’s performance in Mindhunter paints the picture of an immensely talented, dedicated, if not psychologically weak individual. 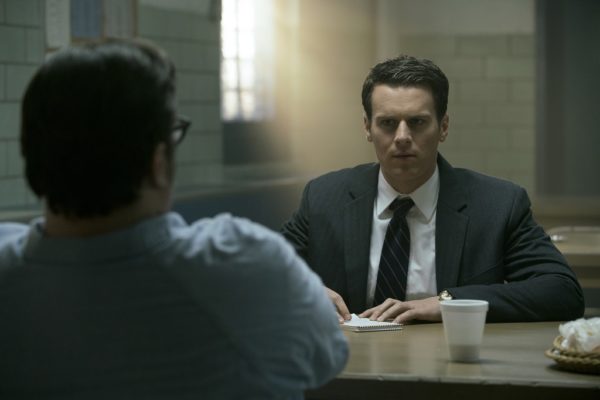 And this is where Groff shines; we are first introduced to Holden Ford as a naïve and curious young agent who knows that the FBI’s tactics just won’t cut it anymore – at least not when it comes to dealing with the worst humanity has to offer. He eventually comes to meet his future partner Tench, beginning and immensely successful journey but one that corrupts his mind along the way.

Groff’s transformation as Ford is a delight to watch, it’s so subtle that you don’t quite realise what’s happening until its already too late. You see, all this time interviewing these killers, wading into the depths of their depraved minds, has had its effects on Ford, he’s starting to take on some rather detestable characteristics of his own. It’s both horrifying and exhilarating to witness.

There are times during Ford’s descent that will cause the viewer to shake their head in disbelief, the tactics employed in apprehending the sadistic and the depraved are incredibly effective but wholly unethical. Season 2 has already been announced, before Mindhunter even premiered in fact, and it will be fascinating to see Ford’s transformation continue, and witness what other horrors await TV’s two new favourite detectives.

But for all the horror etched into Mindunter’s DNA, this is far more Zodiac than Seven – there’s actually very little gore apart from the opening scene – this show is more of a slow burn, a study of the mind and what happens to it once broken. Mindhunter’s thrills come in the form of nuanced conversations, the back and forth between interviewer and interviewee, and this is a world in which Fincher is the master.

Mindhunter is everything one can hope for in modern day prestige TV, and in a year that has been blessed with riveting content of the highest quality, this psychological odyssey is among the very best.

A version of this article was originally posted in November 2017.