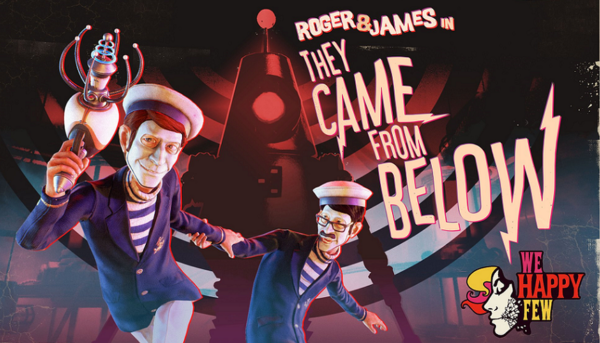 Despite the less than satisfactory reviews, Compulsion Games have extended the psychedelic madness of their 2018 action-adventure, survival horror with a DLC trio, available via season pass. With first episode, They Came From Below, being a success back in April, their second instalment, Lightbearer, is now in the spotlight and hums and very different tune to its predecessor. But how do these extra bundles of joy differ from the base game?

Roger and James in They Came From Below 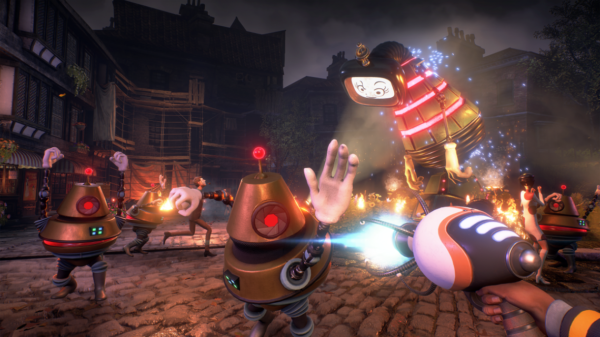 Straight from the horror title, the first campaign establishes a classic B movie vibe alongside the returning Wellington Wells motto of “A Happy Face Means a Happy Place”. The alternate story poses a different threat than delirious Bobbies, as you portray Roger, a rather light-hearted NPC from the principle storyline. With the assistance of his paranoid partner, James, you take Roger on an exploration of an underground lab created by the kidnapped Dr. Faraday, where you undertake a labyrinth of technical problem solving and the extermination of 1950’s style robots.

Yes, robots are the enemy at large, giving a thrilling mad scientist edge to this futuristic adventure, reminiscent of Doctor Who and The War of the Worlds. Its concept screams simple Sci-fi and the progression is linear and more confined against the open world of the main game, but it’s focused on one theme and feels more like the BioShock inspired game that the We Happy Few trailer pitched. There’s also some cheeky Easter egg nods to classic science fiction pop culture, accompanied by an effective Mars Attacks! styled score. 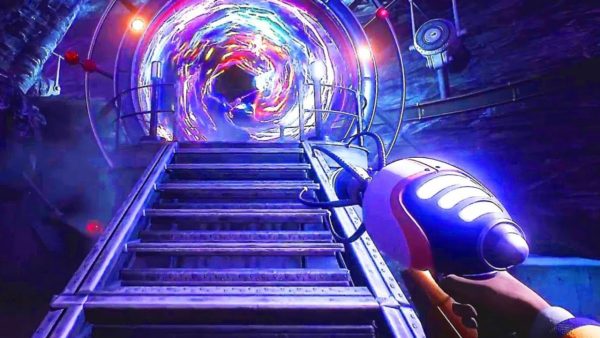 A Ray Gun is your best friend and multi-purpose tool for tasks and combat, interchangeable between range and melee that keeps control handling simple while you fend off eager hoards of electromagnetic HAL 9000’s. The combat is at points relentless while you’re attempting to don your thinking cap. James works in co-op with you via walkie talkie, offering comic relief and pointers along the way that don’t always serve the solution on a silver plate. Unlike the base story, crafting and survival components are non-existent, allowing a more fluid transition between quests rather than being constantly sidetracked to eradicate food poisoning or craft an undetectable outfit.

TCFB continues the pleasing array of smooth graphics as you hunt for Dr. Faraday and expose the catalyst that provoked the robots to see red and reign terror over the town. The framework of WHF is accounted for, but the stripped back gameplay, investable characters and solid style really allows the player to become involved and enjoy a comfortable couple of hours in a mechanical playground.

If you’ve ever wanted to fulfil that dream of living as a rock star, Compulsion’s second DLC has got you covered. Waking after a hard night of sex, drugs and rock ‘n’ roll, Nick Lightbearer – a drug addicted idol that relies on his celebrity status in Wellington Wells – is the protagonist you guide into a trippy game of hide and seek through hotel hell. Where They Came From Below distances itself thematically and mechanically from the main story, Lightbearer is further removed, but in a surprisingly fun way. With a serial killer named Foggy Jack on the loose and blood stains on Lightbearer’s clothes, you are forced into hiding while you search for your stash of Joy pills and fight off aggressive fans along the way.

The distortion of Wellington while you’re high on Joy is visually rewarding through enhanced neon, hippy flowers for stars in the night sky and flies that look like pixies. Nick’s helping hand is a talking rat called, Virgil (who mostly rips the piss out of your inebriated state), as well as gold statues that point you in the right direction towards your quest when triggered by a guitar vibe. The hallucinations you experience throughout the gameplay are immersive and realistic enough to tug your equilibrium, exerting a more psychological horror tone accompanied by a stoner, sitar score. 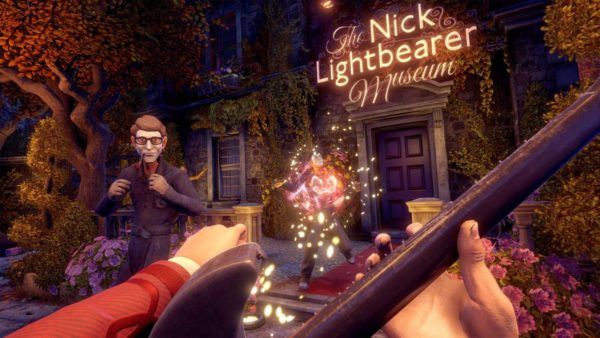 Combat is very different when you’re a wasted musician, whereby using your guitar as a weapon serenades paparazzi and aggravated groupies with chucklesome effect. Power chords render hostiles “mind blown” and gold records can also be used as projectile weapons when guitar strumming becomes ineffective tackling large groups. Coffee, drugs and liquor maintain your vitals and replenish health with added quips such as “Shut up, liver!” when you down a bottle of Scotch for hydration. The most enjoyable part of the episode shrinks Nick to the size of Virgil as you head towards a confrontation with Nick’s ex-wife. Scaling furniture, bouncing on yellow targets to launch you from one side of the room to the other while avoiding a floor hazed in green smoke is a lot of fun.

Lightbearer is literally in a world of its own that continues a DLC series of intriguing WHF characters to become acquainted with and expands the lore of Wellington, presenting itself as a worthwhile world to invest in. Your mission leads you down a dark maze that’s both thrilling and unsettling, when the drugs set in, making it all the more entertaining and unique from They Came From Below. 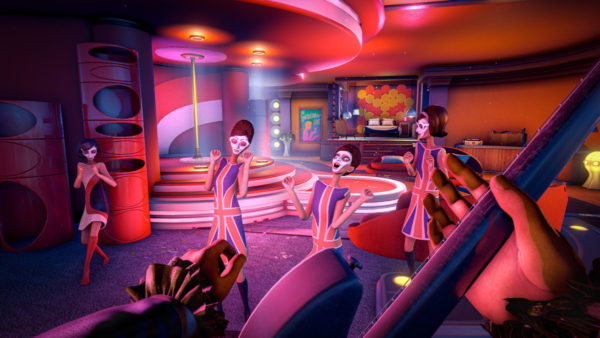 The two charming campaigns released so far are wrapped neatly in their own bubble without becoming detached from its foundation, despite the concepts being very different from the George Orwell style, post-war setting of Arthur Hastings’ journey. The third and final episode, We All Fall Down, is rumoured to “raise the ghosts of the past” and focus on the story of antagonist, Victoria Byng, set for release next year.  Feedback from the first two DLC’s offer some comfort to disgruntled fans who were initially disappointed, but with the applaudable modifications incorporated in these refreshing chapters, 2020 should be a joyride.