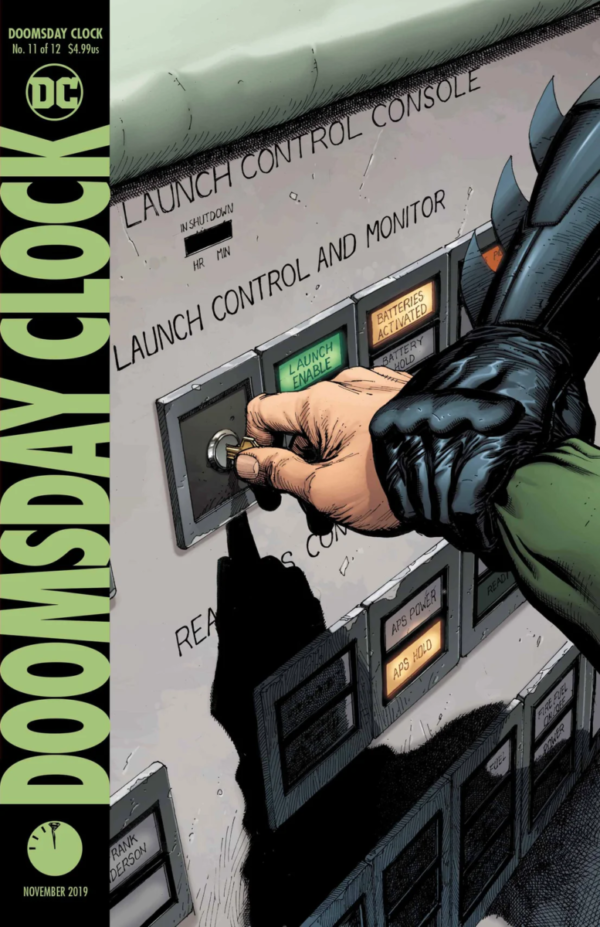 After several months of waiting, the penultimate issue of Geoff Johns and Gary Frank’s Doomsday Clock has arrived. The whole series has been juggling a lot of different stories and as the conclusion nears, it seemed like Johns might not be able to balance everything that was going on. Doomsday Clock #11 puts those fears to rest as Johns mixes everything together with ease and sets up the anticipated climax between Superman and Doctor Manhattan. With Frank’s incredible art, the latest issue of DC’s ambitious series serves as a great piece to the giant puzzle.

Unlike the more recent issues of the series, Doomsday Clock #11 features nearly every character and plot that has been running through the whole story. Johns utilizes all the characters pretty effectively, balancing the main players’ time in the issue pretty well considering the number of characters that appear even while dealing out a fair bit of exposition. Much like Watchmen‘s penultimate chapter, this issue similarly showcases Ozymandias explaining the scope of his plan to an audience while Lex Luthor reveals his own investigations to Lois Lane. The parallel of having two of the smartest and most evil men in the Watchmen and DC Universe monologuing at the same time is not lost, but it’s funny that one of them (Lex) seems to actually be helping while the other (Ozy) is intent on escalating tensions (or what he perceives as help).

Due to Ozymandias and Lex’s lengthy discussions it’s a pretty exposition heavy issue, but Johns still makes it flow well. The dialogue is well written and smart with each character having their own specific voices. There is still a fine balance between the exposition and the action Johns does show, making it a very exciting issue. Even the answers to some of the biggest questions surrounding Doomsday Clock don’t feel forced or rushed as Johns pulls back some of the layers to the story. It still feels a bit busy in places, but the pacing ultimately works. With everything going on, it is unfortunate we don’t get more of Superman or Dr. Manhattan as Johns saves their meeting for the final page and, conversely, the grand finale, but it does feel right that they’re held back in service to tying so many other things together. Though they may not appear physically very much, both characters are at the centre of the story thematically, allowing them to have a presence in the issue.

The one positive thing that can be said about the delays is that it allows Gary Frank the time needed to give the art his best work. Every panel is incredibly detailed, especially the work Frank puts into his characters. Their facial expressions are very emotive and there’s a good sense of movement in and between the panels, from characters walking down a hallway or simply glaring at each other across a field or through a cage door. Frank’s shows a consistency in his work that serves the series quite well as there’s no sign of rushed artwork. Brad Anderson’s colours compliment Frank’s art quite nicely, utilizing a lot of dark colours of the city streets against the fires and destruction riots and superhero brawls have left. Despite the frustration the delays have caused, it is always worth it to get quality artwork like this from Frank and Anderson.

Doomsday Clock #11 is a great penultimate issue to Johns’ long and epic series. The end truly is nigh now as Johns does well to build some of the excitement back up as he balanced a whole lot of characters and exposition together pretty well, keeping much of the focus on the characters. Frank’s artwork is gorgeous with his attention to detail while Anderson provides a lot of vibrant colours throughout the story. While there is little doubt at this point for most readers, hopefully the finale will live up to the series’ initial promise and deliver something meaningful for both Superman and Watchmen fans.