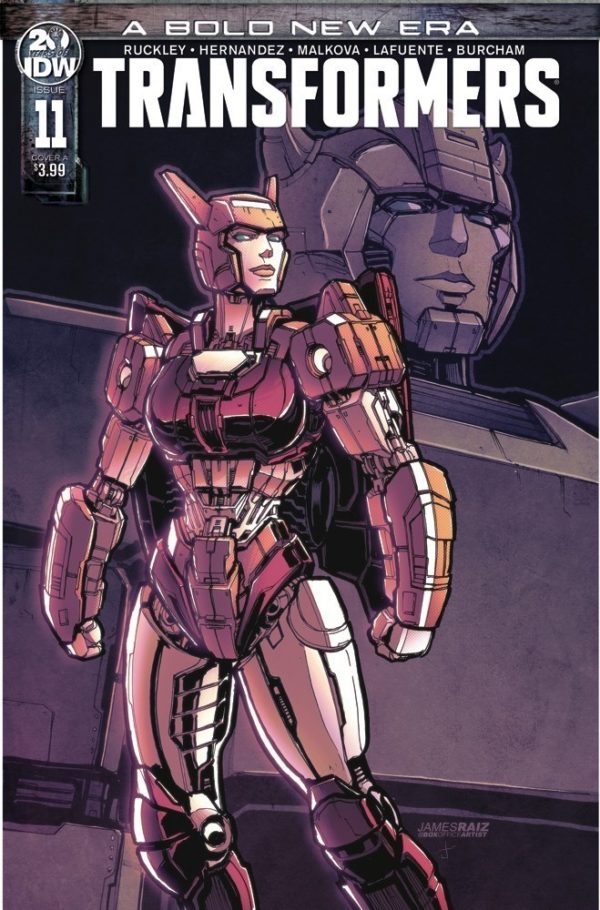 Brian Ruckley took a big leap forward in Transformers #11 as several story threads came together and left fans on a big cliffhanger that only spells doom for the Autobots and all of Cybertron. The story was very focused and on point with great charactizations of most of the cast, particularly Megatron. Out of all the issues thus far, this latest one is the best for how well Ruckley balances the story and character with some great artwork to boot.

What began as a slow burn for the series has really picked up momentum these last few issues and Transformers #11 is no exception. Right from the first page, Ruckley wastes no time diving into the meat of the story as the tensions between the Autobots and Megatron’s Ascenticons rise (no pun intended given Megatron’s secret partnership with the Rise). He does a fine balance focusing on Megatron’s attempts to set their plans back on track and Orion Pax and Bumblebee’s own investigation into the Ascenticons. Both sides introduce some very intriguing developments to the plot that makes certain elements all the more complex. The only downside to the issue is that after all the build-up the series has given to the return of Sentinel Prime and Starscream to the planet, they only appear in the first two pages and are not seen again. Given the amount of material Ruckley worked with, their absence isn’t fully a detriment, but it’s odd since their return has been built up to the point they appeared on a cover to an issue they weren’t even in. Hopefully though we’ll get more of them thanks to Megatron’s move at the issue’s conclusion.

Ruckley does nail the characterizations of many bots, Megatron chief among them. His outburst at learning of Soundwave’s transgressions were great as it showed his often stoic demeanor crumble a bit. It also served to portray Soundwave in a new light. He’s usually always been Megatron’s most loyal follower and does what he says without question, but it was interesting to see Ruckley play with that as Soundwave gave orders without Megatron’s acceptance or knowledge. Even the way Soundwave calmly sat in his chair as Megatron raged around his office pointed to a slightly different dynamic between the two where Soundwave isn’t quite as subservient to Megatron as he has in past iterations. Despite things briefly spiraling out of his control, Megatron was able to show off his cunning with his quick plan and fiery speech. Ruckley’s writing of Megatron’s speech was captivating and flowed very well, showcasing how so many Cybertronians could be swayed by his message while the moment Megatron unveiled the new Ascenticon symbol, being the classic Decepticon insignia, felt very well-earned and perfectly built up.

On the other side of the factions, Bumblebee and Orion finally got a scene together which revealed Bumblebee has been a plant in Megatron’s Ascenticon movement from the beginning, slowly infiltrating the group the where he is now. It’s the big reason why Bee wasn’t around much to help Rubble and why he was missing when Rubble died. While it’s clear Bee is still on the side of good, it’s interesting that he seems to be helping Orion not out of any sense of duty or loyalty to the Autobots or Orion, but out of obligation to pay a debt. Much like Ruckley’s handling of Soundwave, it paints a more interesting picture of Bee since he’s always been so loyal to Optimus during the war. Ruckley wrote the exchange between the two bots well as he kept Bee’s animosity at the forefront even as the two compiled their theories on the Rise and Ascenticons connection.

The art throughout the issue ranged from pretty good to fantastic. Anna Malkova displayed some excellent character work through their movements and facial expressions. Her renditions of Megatron during his tempter tantrum and speech were the issue’s highlight as he was the most animated he’s been in the series. Whether it was throwing a table or grandstanding for the cameras, Megatron had a whole lot of personality in his body language thanks to Malkova’s work. Angel Hernandez focused more on the action scene between Bee and Sixshot as the Rise attempted to ‘kidnap’ Barricade. Herandez had some nice choreography between the combatants and a good sense of flow. He had a great level of detail on some of the characters bodies and their transformations, though his figures appeared a bit too blocky or 2-D in some images. For such a big bot, Sixshot looked paper thin in some panels that showed off his side profile. The colours from Joana Lafuente and Josh Burcham were great, though, offering a vibrant palette and a nice blend of lights and darks during Megatron’s scenes.

Transformers #11 has seemingly changed the game as Megatron makes a big move and comes a step closer for forming the Decepticons. It’s nice to see the series picking up the pace while Ruckley’s characterizations of Megatron and the rest of the bots are pretty intriguing. Malkova’s animated artwork is the best aspect to the issue while Herandez delivers a good action sequence. With the series switching from bi-monthly to monthly soon, hopefully Transformers will keep this momentum going.