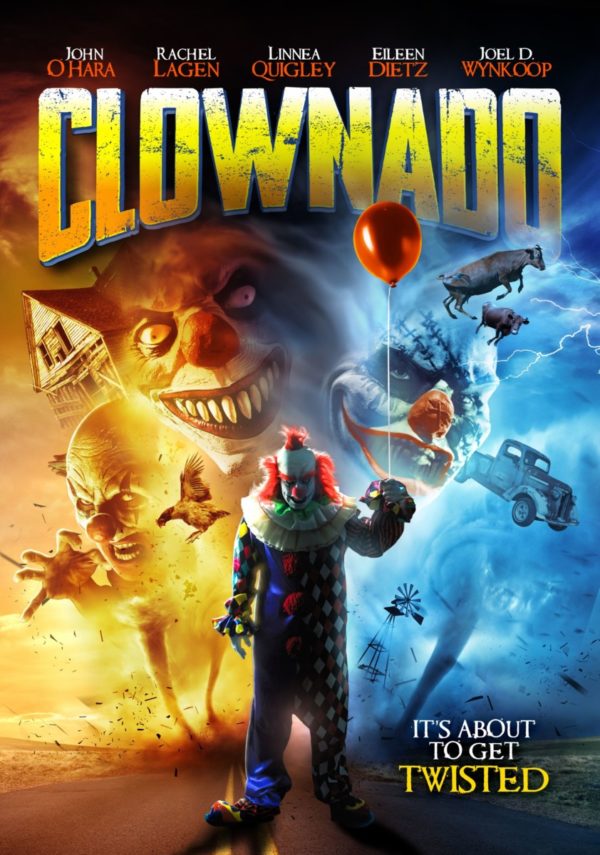 Cursed demonic circus clowns set out on a vengeful massacre using tornadoes. A stripper, Elvis impersonator, truck driver, teen runaway, and a dude get caught in the supernatural battle between femme fatal and the boss clown from hell. 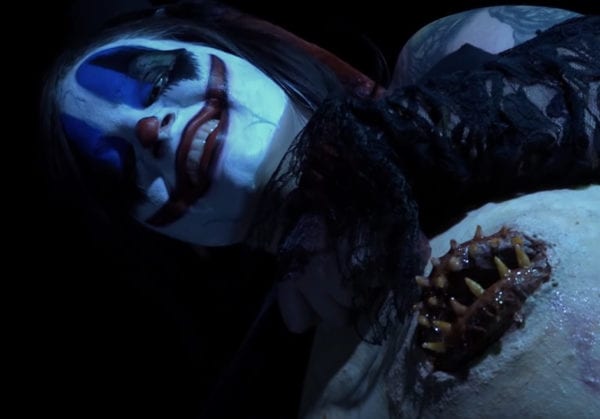 Stop me if you’ve heard this one before. An African-American Elvis impersonator, bartop stripper, and rural storm chasers find themselves combating a supernatural tornado loaded with murderous clowns. Welcome, one and all, to the mashup stunt that is Todd Sheets’ Clownado. Like Sharknado, but with Great Whites swapped for Coulrophobia and fanged monster boobies. Sheets’ microbudget slaughterhouse legacy remains intact via 2019’s kitchen-sink tale of mystical circus curses, gelatin molded gore, and backyard prosthetic effects. Grotesque “carnevil” lunacy in the name of pushing boundaries, filmed with niche audiences in mind (read: Todd Sheets fans). 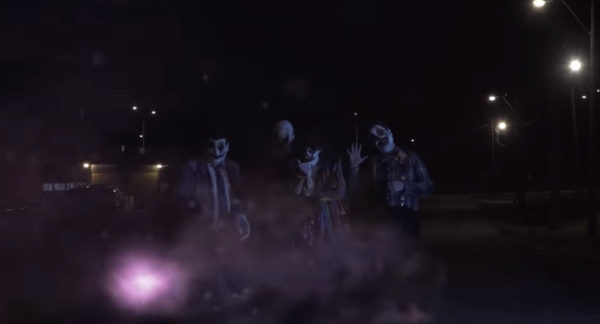 What are the rules of Clownado, you ask? I don’t know. I doubt Mr. Sheets could explain any better. Big Ronnie’s freakshow villains appear at random, teleport via tornado gusts, yet can die due to mortal gunshot wounds? Cayt Feinics’s “Satchel the Clown” flashes eat-you-alive honkers, but no other clown displays supernatural powers or mutations? The tornado’s trajectory is never explained, summoning never expanded on, and – honestly, what’s the point. Sheets isn’t here combing biology textbooks or shooting for “accuracy” in storytelling. Who needs “logic” when deaths are executed at a premium?

Give credit, because Todd Sheets keeps damnation practical. “Indie practical” – bargain-bin concoctions of bodily juices – but practical nonetheless. Satchel’s mini-mouths where her areolas should be are just the tip o’ the flesh icebergs, her stomach opening like Norris’ chest in The Thing. Heads are detached, chunks of man meat sectioned with cleavers, children mangled, senior citizens snapped like wishbones – Sheets gets sickly sloppy. Clownado works towards massacres with every advancement, hence why plotted connections are so flimsy at times (a lot of times). It’s not about *how* clowns appear outside diner windows, but what nauseating methods they use to pile bodies higher than Ferris wheel heights. 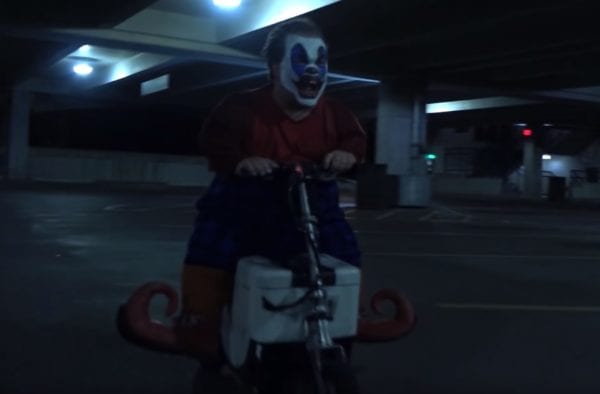 Your mileage for carnie carnage will depend on how you like your horror movies. Clownado is a rough watch, technically speaking. Characters waver in-and-out of wiseguy-heavy gangster voices, goofily representing the “Clown Mafia” – no joke – with distracting emphasis. Sound effects laid atop violence sound like foley artists slurping soup to mimic hand-to-brain mutilation, while other effects such as gunshots echo an outdated mp3 tininess. Green screen work? Not much butter, slapping photoshop-level graphics atop stored B-roll available from any public repository. Dialogue speaks almost exclusively through metaphors with unnatural force, gore itself repetitive given death’s frequency, production design barebones – “meager” would be an overstatement when classifying what little means Sheets cannot hide.

Where Clownado falters is trying to force “Video Nasty” exploitation. Female actresses appear contractually obligated to expose their breasts, oftentimes unnecessarily. Kill sequences replace storytelling in that we’re inundated by predatory clowns crushing skulls within their grasp, jellies running out wounds and “blood” gushing with the streamed force of power washers. It’s very much an amalgamation of raunchy nods towards beloved after-dark classics, but without acknowledging how these standout moments cannot be forced or overused. Why include deadbeat dad plotlines and inherent racial tension you never intend to dutifully arc? 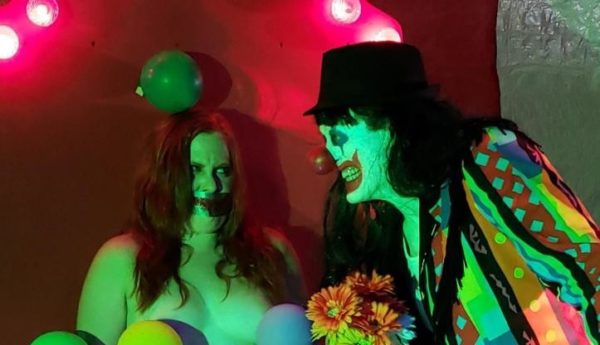 Then again, there will be an audience for such Mad Libs imagination. Crystals with reanimation powers are implanted within gutted victims, who then shove bladed kitchen utensils into chewed-up forearm stumps as makeshift weapon hands. Hitchhikers passionately smooch same-sex drivers, only to slit said hookup’s throat wide open. Characters insert the word “clown” into sentences whenever possible as a “clever” nod to, um, the clowns in the movie? Sheets has built a following on cadaver creationism soaked in gallons upon lakes full of fake blood, competency never a care. Hence why you’ll catch – without context – a female clown die (re-die?), then have her offspring (never noted pregnant) burst as a middle-aged midget from her stomach covered in rubber intestinal tubing.

Don’t worry, you’ll get all that oddness and more. Countless references to Kansas City’s best darn “Italian Steak” sandwich. Sweat drenching every actor because I guess they filmed through a heatwave. Cannibalistic jesters who drop lines like, “Crumb cake, my favorite,” before chomping into human organs (uh, crumb cake). A taser gun prop that’s so blatantly a flashlight. I…why am I still typing?

Clownado is one of those howlin’ wild experiences you’d think I’d recommend, but quality can’t justify all the booze in the world it’d take to make Todd Sheet’s latest appear coherent. Make no mistake, violent effects are a thick milkshake of red spillage, chunky viscera, and shredded pulp cascading down from stumps where heads used to attach. If that’s enough to satiate your horror hunger, Satan be praised. Others will sit perplexed as gags range from cringe-worthy (everyone calls the diner waitress “Flo” even though it’s not her name) to throw away (Mr. Elvis Man, why?). Pacing is jagged. Clown congregations are nothing but a chorus of poorly defined high-pitched giggles. What a mess, from the gross-out to structurally flawed. Chophouse “delights” that’d make the Joker blush, but unfortunately, predictably, not much else.