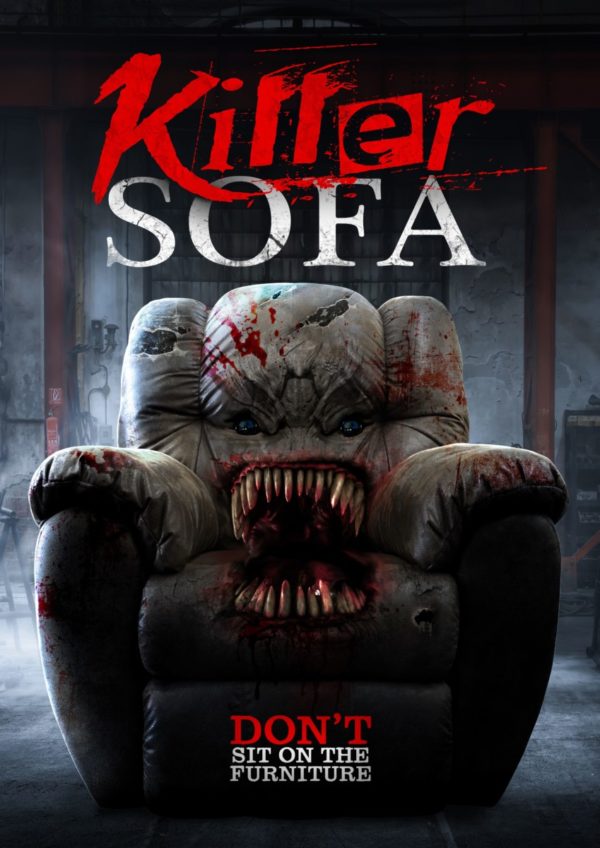 A killer reclining chair becomes enchanted by a girl and starts committing crimes of passion.

Bernie Rao’s Killer Sofa is the “Zombeavers of inanimate object horror” in that title and concept are fulfilled though the zaniest means (Zombeavers a personal favorite and prime example, mind you). Nothing about Killer Sofa makes sense, but Rao leans into one of the year’s most insane but believed-in midnighter experiences. Proficient where something like Clownado’s title-stunt marketing ploy promises the moon (er…cannibal clown weather phenomenon) but delivers something completely different. Deceptive posters blend Twister and House Of 1000 Corpses while execution never follows a promised narrative. Not here, readers.

Dare I claim you and your most adventurous low-rent horror mates could have some fun reclining into the up-fright position with Rao’s comfy-cozy killer?

Meet Francesca (Piimio Mei), an attractive woman who men can’t help but fall under an obsessive spell over. This includes admirer Frederico (Harley Neville), who’s found inexplicably murdered one morning. Soon after, Francesca receives a new chair for her living room, which brings with it an uneasiness. Francesca feels a looming presence in her apartment, which wise Rabbi Jack (Jim Baltaxe) identifies as a “Dybbuk” demon. Could Francesca’s new La-Z-Boy be possessed by an evil spirit killing everyone she knows? I mean, you saw the title of the film.

Don’t get me wrong. Killer Sofa is no Bed Of The Dead or Rubber. At times, Rao evokes energies of a made-for-cable midnight flick within another film (the goofball movie within a movie vibe). Thing is, folds between scenery cushions hide more than just a simple “couch that eats people” concept. Romantic voyeurism plays into a centuries’ old legend then morphed into a modern-day bastardization of love languages. It’s hilariously “deep” when it doesn’t need to be, including Tohunga Makutu (Grant Kereama) and his online database of Dybbuk explainer video content. Same for Frederico’s “Dark Freddie Blog,” where he reviews occult materials from zombie flicks to broadswords.

Thematic patters clash, mind you. Rabbi Jack (some Richard Dreyfuss lookin’ Jewish rastra oldie with supernatural powers) keeps visiting this early-civilization flashback world at random. Later body-swapping sees spirits jump vessels like a street grifter hides a ball under cups – there’s no telling which essence is where. At times, I wish Killer Sofa WAS just about some cursed upholstered piece of furniture with a mind of its own. Don’t expect Chairry from Pee Wee’s Playhouse going on a slasher spree. Bumbling detectives attempt to protect a paranoid woman from perverts of the flesh and invaders of the unknown – it’s all, well, a LOT to follow given circumstances.

Now, here’s where I say Killer Sofa captures some of my favorite shots of 2019. This is what makes Killer Sofa a cut above those cheapo excuses for “gonzo” indie cinema. Rao understands how ludicrous a suspension of belief he’s asking – but leans into precisely the stupidity we require. A nervous Francesca leaving her apartment, strutting down her driveway, as the camera pans back to THE SOFA WATCHING FRANCESA WALK AWAY FROM AN OVERLOOKING WINDOW. Cut to me spit-taking some water to be cleaned up later.

It’s not even that the gore slices and dices in nasty fashion. Or soul transference energy bolts are more accomplished than “Baby’s First Adobe After Effects.” Killer Sofa is hampered by budgetary constraints, and can’t afford everything it’d desire (vacuum gut-suck aside). Rao’s workaround is simple, though – showcase the damn killer sofa. 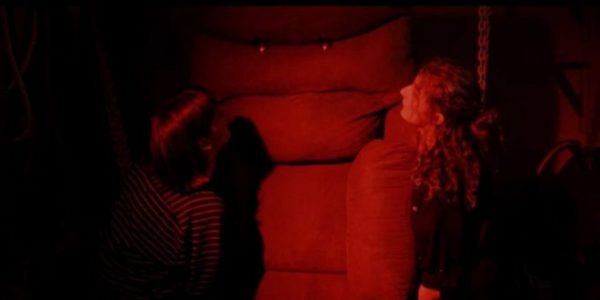 Performances aren’t particularly noteworthy, but, again, what did you expect? Although, Piimio Mei’s reactions as Francesca cue laughs as she slowly sleuths out her couch’s motivations. Nathalie Morris adds a capable command of dialogue as Francesca’s best friend Maxi. An air of bemusement surrounds most performances, asking other characters about voodoo clues with raised eyebrows and proper suspicion. Killer Sofa isn’t one of those watches where investigators are meant to blindly accept the delusions displayed. Well, maybe except Rabbi Jack – but that’s his intended vision-questing arc. Rao strikes a balance between selling comedy and retaining “grounded” (by comparison) reactions. Somehow.

Killer Sofa is weird, sometimes unwieldy, but should delight those who giggled incessantly at the film’s properly conveyed trailer. Bernie Rao deserves credit for making one of the year’s craziest screenplays as watchable as he did, with your mileage dependant on microbudget patience. There’s niftiness here that sells “killer couch” gags without needing buckets of fake blood or severed limbs. More so, it’s *more* than a “killer couch” gag. Barely, maybe in small doses, but let’s just say the complexities shown won this not-easily-surprised critic. Go ahead, snuggle up with Rao’s stupifying massacre after you bless whatever you’re cuddling atop with holy water.