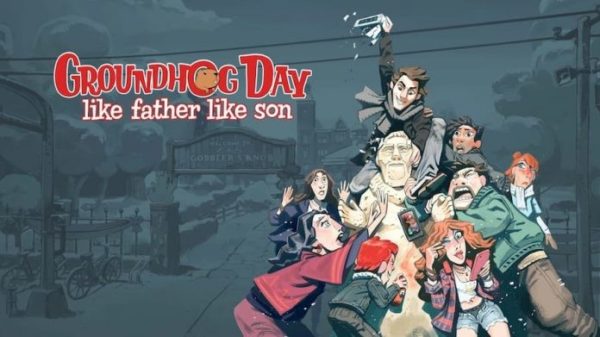 Video games based on movies historically have a wonky rep, and rightly so. When you throw the challenges of VR gaming into the mix too, along with the complexity of timey-wimey source material, it has so much potential for disrespectful disaster.

But thankfully with Tequila Works at the helm – the team behind VR murder-mystery romp The Invisible Hours – the classic 1993 Bill Murray-starring time loop comedy Groundhog Day gets a winningly reverent and oft-ambitious VR follow-up.

Groundhog Day: Like Father, Like Son takes place following the death of Murray’s movie protagonist Phil Connors, focused instead on his son, also named Phil. Phil Jr., a vlogger, finds himself back in his sleepy, podunk hometown of Punxsutawney to cover the annual Groundhog Day festivities, only to himself end up trapped in the very same time loop that huaranged his father decades prior. And of course, until the obnoxious Phil Jr. learns the same lesson his father did – to respect family, friends and everyone else – he’s doomed to repeat his day forever more.

While it’s easy to see how a canny dev team could translate the forced monotony of a time loop into a compelling gameplay loop, what’s more impressive about this game is how well it handles its story. 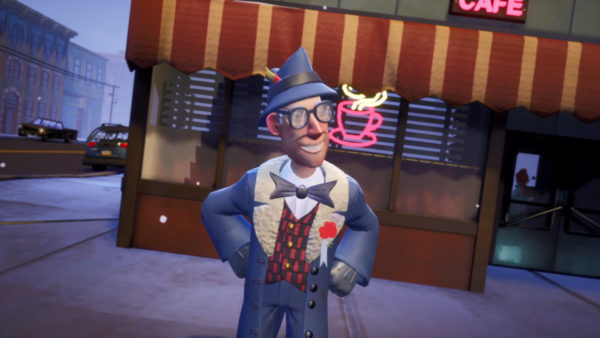 Echoing the movie closely while leaping off to tell their own contemporary tale, Tequila Works has ensured not to besmirch the beloved original nor simply regurgitate a lazy also-ran; the themes of family, mortality and the passage of time are recalled in a new, effective way. This is especially true in an unexpectedly poignant denouement which proves the added immersion of VR need not strictly be tactile.

Indeed, this is a game made with a palpable love for the source material, with countless charming nods both obvious and hidden. Impressively, the production actually stumped up the dough to include Sonny and Cher’s “I Got You Babe” as Phil Jr.’s recurring radio wake-up track, and though neither Andie MacDowell nor Stephen Tobolowsky are back to reprise the roles of Rita and Ned Ryerson, the soundalikes do about as solid a job as you could expect. But if you need any one indication of the devs’ fondness for the film, keep your eyes peeled during the game’s ending sequence for a “cameo” from the late director himself, Harold Ramis.

Gameplay meanwhile requires players to act out a “perfect day”, the specifics of which don’t become fully clear for a couple of the game’s six-ish hours, as you’re slowly drip-fed realisations of what your friends and family need from you in order to be happy.

After waking up, you’ll work through a series of scenarios – such as hanging out with your family over breakfast, visiting a memorial for your father, heading to a diner and so on – where your interactions create a series of branching scenarios, where more scenes are generated. Within these scenes, you’ll need to find the perfect dialogue options to win people over, though much of the game is dominated by a series of mini-games.

In perhaps the most memorable of these asides, you’ll play a primitive shoot ’em up game in order to learn how to fix your brother’s cappuccino machine – shooting coffee beans using lasers, no less – and in another you’ll partake in a surprisingly tactile VR spray painting lesson in order to impress your former flame’s young son. Elsewhere you’ll dance, you’ll make cocktails, you’ll carve a statue of your dear old dad and much more. 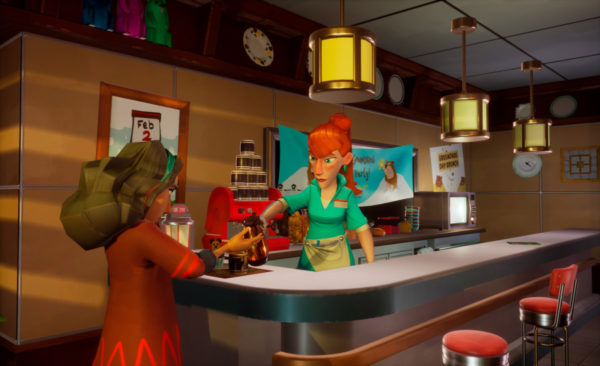 There’s a decent diversity to these tasks, though it’s slightly frustrating that the game effectively forces a sub-par performance the first time around in an attempt to show Phil Jr.’s improvement over time. Some may be disappointed to learn that there’s actually no way for players to make a successful A-to-Z path from the very beginning of the game, and you’ll need to work through the scripted failures first, which will likely harm the replay value – if it even much exists – for many.

However, the ability to replay individual scenes and mini-games right away ensures the inherent repetition doesn’t feel too much like busy-work; you’re never asked to repeat the entire 20-30 minute day loop for one simple screw-up, though it’s easy to see how a rewind mechanic could further cut down on the monotony. Thankfully enough concessions have been made to generally respect the player’s time, even if having to repeat some sequences until others have been correctly executed can prove mildly irritating.

The time loop conceit may be relatively transparent at the end of the day, but there are flecks of cleverness, and it’s satisfying seeing the picture start to slowly come together later on. It’s clear that some storytelling compromises have been made re: the more ambiguous logic of the movie’s loop, but given the complexity of the task at hand, it’s absolutely understandable.

If there’s any one prevailing issue with the game, it’s absolutely the inability to explore Punxsutawney at will. Despite having a map of the town on your phone, you’re on a pretty linear track for the overwhelming majority of the game outside of the prescribed deviations, able only to teleport to prescribed points-of-interest, which is undeniably disappointing given the iconography on offer. 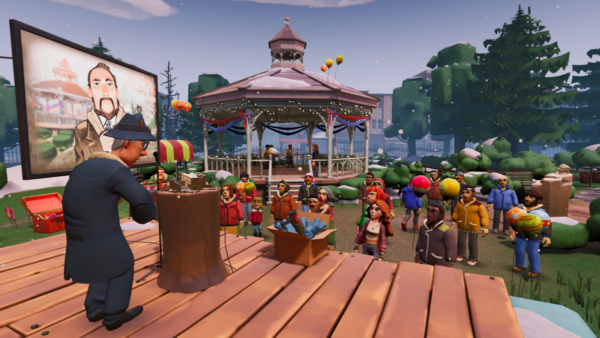 Despite the visuals invoking Job Simulator, those expecting a similar level of interactivity may also be underwhelmed; there’s decidedly less chance to tinker with your surroundings, and objects also handle far more clumsily. However, the game is nevertheless packed with objects worth picking up, not to mention Easter egg collectibles and other hidden trinkets of value.

Graphically, Like Father, Like Son is decent if ultimately unambitious; Punxsutawney is captured in its endearingly airy glory and the cartoonish character designs are a smart choice. Bizarrely, however, the sense of presence and immersion is hampered occasionally by other characters randomly staring off into space or at the wrong character while speaking. More explicit glitches are also relatively frequent; I had to restart one mini-game several times due to the next sequence failing to trigger, and occasionally I’d witness canned animations clipping through one another.

Aurally, the game boasts well above-average voice acting, selling the emotion of the scenario and ensuring that the colourful cast of characters all feel distinct and believable. In a surprising move, the game’s “M” rating means the characters are frequently potty-mouthed, which may rub some fans of the PG-rated movie the wrong way. As the game takes place in our own present, there’s also plenty of contemporary humour and the inevitable inclusion of modern technology, which actually slots unexpectedly comfortably into this world we know.

Given the mature tone, it’s slightly disappointing that players aren’t afforded the option to off themselves as Phil so memorably did in the movie. This could’ve lent the game an added macabre dimension, though perhaps it may have created a certain ludonarrative dissonance with the more sentimental and earnest tone the game is ultimately striving for – with a firm degree of success for the most part.

For a video game based on a movie – and a VR one no less – Groundhog Day: Like Father, Like Son should do enough to please fans, even if its neat concept feels a little under-developed in places. 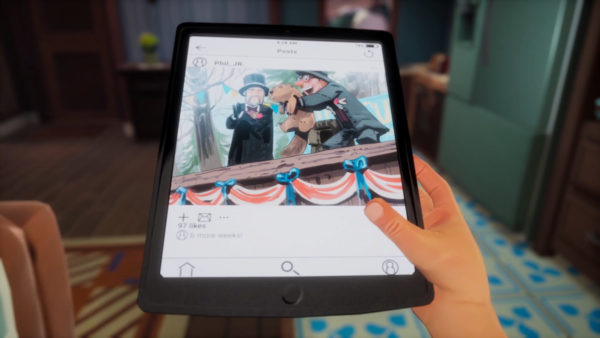 Cons:
– Exploration is incredibly limited.
– Interactivity can be awkward at times.
– Occasional glitches.