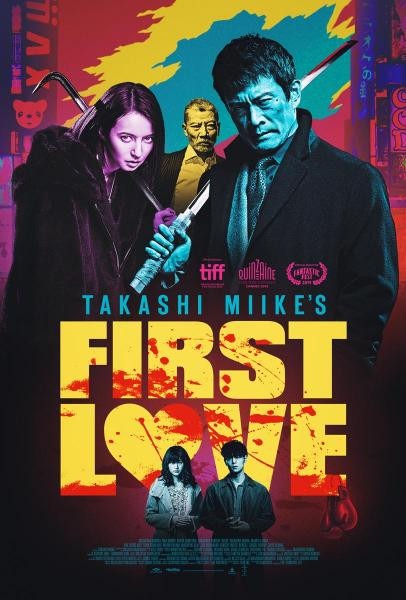 A young boxer and a call girl get caught up in a drug-smuggling scheme over the course of one night in Tokyo.

The latest film from the industrious Takashi Miike – “only” his single project released this year, bizarrely – won’t surprise his familiars in any way, but honestly, is that a bad thing? As consistently demented and compulsively compelling as you’d expect for a Yakuza-spiced love story-cum-gangster flick from the master filmmaker, First Love trades a stock narrative for uproarious laughs and lashings of goopy gore.

The tripartite plot goes as follows; we have young boxer Leo (Masataka Kubota), who after being diagnosed with terminal brain cancer crosses paths with Yuri (Sakurako Kanishi), a young woman sold into sex slavery in order to cover her addict father’s debts.

Meanwhile, ambitious young Yakuza Kase (Shota Sometani) endeavours to play his own clan against both the Chinese triads and corrupt cops for his own material gain. These sprawling threads quickly start stranding together, leading to a second half that’s effectively an extended montage of death scenes both hysterical and grotesque. Mercifully, the fairly routine plot machinations are shamelessly secondary to the gonzo mayhem, and what initially seems to be a complex web of subplots quickly lineates into a more easily digestible tale of frame-ups, double-crosses layered on top of double-crosses, desperate attempts to cover asses and even a few honest-to-God accidents. That this results in a comically large pile of bodies should surprise no-one.

Within three minutes of the movie starting, a man’s head has been cleanly parted from his head with a samurai sword, and as if Miike were somehow invoking classic Brit sitcom The Young Ones (he surely wasn’t), the victim walks around for a fair few beats, sans-head, before finally collapsing to the floor.

If the expository first act implies an oddly restrained effort from Miike, though, fear not; this is a movie where men wielding tasers and pistols awkwardly maim one another, a one-armed guy wields a shotgun, another man lovingly rubs cocaine into his own bullet wound, and it climaxes with a moment so outlandish it has to be rendered in animated form, presumably because the budget couldn’t quite stretch to a live-action realisation.

In typical Miike form, there’s a deliciously dark playfulness to the violence at almost all times, yet the filmmaker isn’t afraid to go further and get very silly, to the extent of straight-up slapstick and, in a moment that’s peculiar even for this director’s standards, showcasing a dancing vision of Yuri’s tighty-whities-clad paedophile father. The film’s few earnest aspirations are less successful though certainly not offensive; the actual romance implied by the title, between Leo and Yuri, is spread mercifully thinly, and despite ultimately feeling a tad forced, actually arrives at an unexpectedly poignant payoff at pic’s end.

Beyond all this, Miike’s cast is fully in step with the material, especially Shōta Sometani, who steals the show as the rubber-faced Yakuza goofball Kase, his affected low-pitched bleating and incessant mugging complimenting the abhorrently low value he places on human life in the most terrifically jarring way.

Miike’s usual excesses are at play, because of course they are, though once the more verbose opening passage is done with, First Love ends up defined by its energetic clip and infectious sense of barmy fun. There aren’t many directors who could pull off a slapstick Yakuza film, but Takashi Miike sure is one of them.