Kit, a British Vietnamese man, returns to Saigon for the first time in over 30 years, after fleeing during the Vietnam-American War. 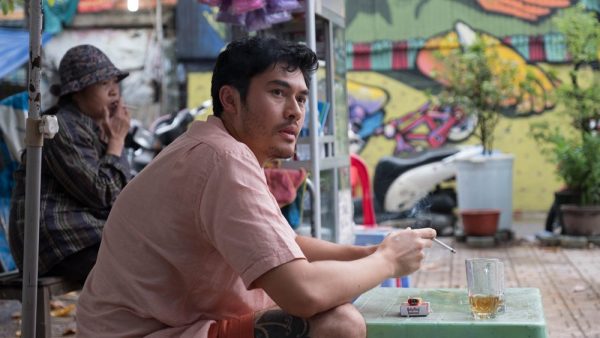 Hong Khaou’s follow-up to his 2014 debut Lilting is a similarly sober offering that, despite its scant 86-minute runtime, is in no rush whatsoever to tell its minimalist tale. While Khaou’s sophomore feature feels a little malnourished as a piece of visceral storytelling, it’s a worthy effort largely thanks to an enticingly pared-down performance from lead Henry Golding.

British resident Kit (Golding) is visiting Vietnam to scatter the ashes of his recently deceased mother, who moved him from Vietnam to London as a child to escape the country’s post-war struggles. Upon touching down, Kit feels lost in the country he barely knew as a youngster, drifting from family friend to stranger to casual lover, hoping to discover a meaningful resting place for his mother’s ashes.

Khaou’s film ably touches on notions of cultural identity and the connection one can feel – or not feel – to their heritage, and specifically a piece of land. The entirety of Kit’s journey stands in the shadow of the Vietnam war, the turmoil left behind and the country’s subsequent reunification, which profoundly affected his entire family and resulted in his father leaving him and his mother. This is contrasted with the experience of his lover Lewis (Parker Sawyers), a black American man who is in Vietnam to oversee the launch of his clothing company, and whose father was a soldier in the war. 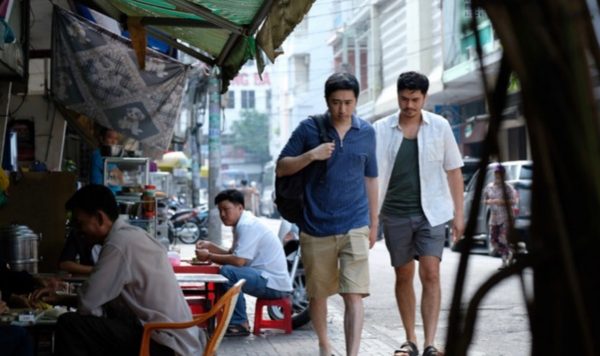 This set-up is a launch pad from which Khaou examines ghosts of the past and collective, national guilt. In one memorable exchange, Kit calls out Lewis for setting up his clothing factory in the country in order to exploit the cheap labour, while Lewis retorts that he’s creating job opportunities which wouldn’t exist otherwise. When considered within the context of a Vietnam striving desperately for a sense of modernity, it’s a fascinating conundrum.

Like Lilting, Monsoon is a movie which benefits enormously from its strikingly authentic performances. Golding, in just his third movie role and second year in the acting ‘biz, gamely paints on the naturalistic canvas afforded to him and proves he can appropriately down-shift from his broader work in Hollywood fare. It’s an agreeably understated turn, vibing well with even the sparse, dialogue-free sequences which don’t necessarily ask Golding to do much acting-with-a-capital-A.

Golding’s relaxed chemistry with Sawyers and the film’s other well-cast performers lends the piece a sure humanistic warmth, even if our lead sometimes has to make do with some oddly rhetorical dialogues – where questions are casually ignored without answer, an old Hollywood screenwriting cliche – which clash with the otherwise strictly naturalistic tone. 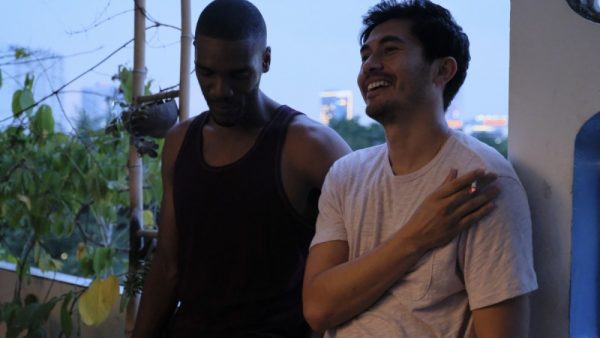 The film’s pacing may prove too glacial and meditative for many, yet its larger issue is a failure to conjure up compelling enough emotion; Kit’s story ends abruptly and audiences may feel that they’ve not been given sufficient time to soak it up. That this ellipsis isn’t particularly cathartic or satisfying doesn’t help, either.

What it lacks in dramatic verve compared to Lilting, however, it somewhat compensates with its greater visual flair. Well-trod indie film cinematographer Benjamin Kracun takes full advantage of the exotic setting, treating audiences to countless ambling glimpses of Kit riding around Saigon and Hanoi on the back of a motorcycle, allowing them to drink these epic sights in. Sound editing is also uniquely good in places, especially during Kit’s numerous amourous scenes, where every kiss has been captured with an almost uncomfortable intimacy.

At its best, Monsoon is an observational character piece which tenderly explores the multi-faceted ties that bind people both to locations and each other. A well-acted postcard for Vietnam, if ultimately slight to a fault and lacking the emotional thrust of Khaou’s debut.