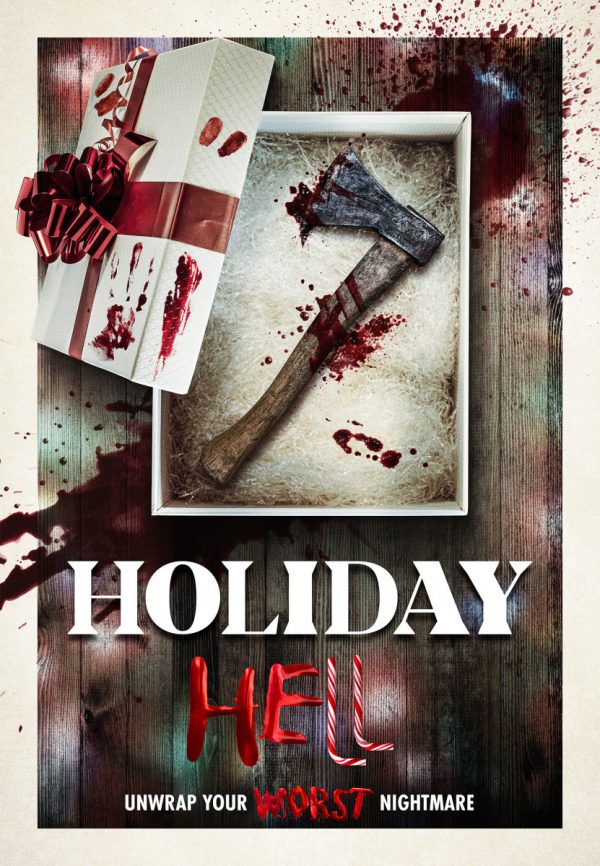 On Christmas Eve, a woman enters a shop looking for a last-minute gift. She meets a mysterious shopkeeper (Combs) who tells her the horrific stories behind four objects in the shop. 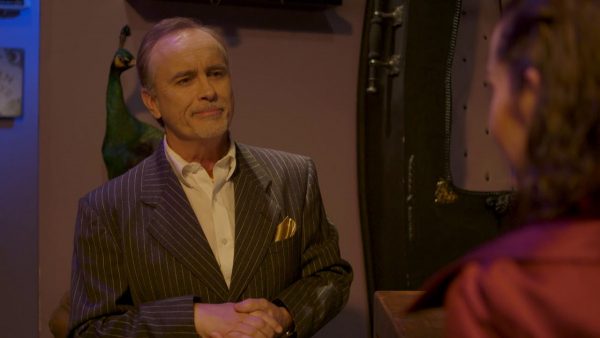 Anthology horror is a mixed bag by nature. Trying to group different stories under one umbrella isn’t the most straightforward of tasks. For every Trick ‘r Treat or Creepshow, there’s a Creepshow 2 waiting in the wings. While Holiday Hell doesn’t go the lousy route of the latter, this is a far cry from modern horror anthologies like VHS.

What Holiday Hell does have is Jeffrey Combs camping up the place, so that’s a positive most don’t have. As the shopkeeper and storyteller, Combs is at the center of the story; he’s a great reprieve between some of the weaker entries.

The shopkeeper is closing up his unique shop for the night when a young woman enters unexpectedly. Looking for a strange gift for her sister, the woman in the shop is told stories about different items she encounters. Each item sending us into another short, all themed around certain holidays.

And as someone expecting this to be a movie about Christmas, that’s where I got my first surprise as the film dives into different holidays ranging from Hanukkah to Valentine’s Day. Let’s dive into each short within Holiday Hell and how it stacks up to the others. One of the weaker entries in terms of dialogue and acting, Dollface, at least kept me entertained by its story. Once you get past the paper-thin characters, I found the story at the root of this to be more heartbreaking than expected.

Revenge stories aren’t always the easiest to tell in a short form as you want time to build tension and heat. That’s what took me by surprise the most here is how they effectively sold this tale. It still throws me off me to hear how horrid the dialogue is throughout the short, and don’t even get me started on that fight scene at near the end.

The Hand that Rocks the Dreidel I can’t place my finger on why this one worked so well for me. The story about the young boy and his creepy new rabbi doll entertained me from start to finish. As a fan of Puppet Master, that could explain my enjoyment: The Hand that Rocks the Dreidel is straight out of one of those movies.

From the atmosphere to even the Jewish subject matter, it reeks of the long-running creepy doll franchise, but that’s not always a bad thing. Someone needs to hire director Jeff Ferrell to do the next entry because this is entirely in tune with those wacky films. Teetering between campy and dark is the right tone for a film like this. When starting Holiday Hell, I expected more of the entries to be like this in terms of story-telling. A Christmas slasher mixed with some sad real-life issues is well-worn territory, so only seeing one of them here is excellent. Christmas Carnage is far from unique, though. This short suffered from some strange directional choice, like an off-putting score and uninspired kills.

One of the highlights, though, is character actor Joel Murray getting another starring role. As a big fan of him in the overlooked God Bless America, he brought similar energy to this. That helped a lot as he transcends most of the weaknesses. What a treat to see an anthology story that ties into the wrap-around narrative. Moments like that show an effort to tie it all together and give the style some substance. While each entry had varying degrees of enjoyment, the weight Room To Let had to the overall film made this the best of the bunch.

Not to spoil anything, but since this carries over to the film’s ending, you get more time to flesh this story out. Also, while each of the shorts ends in a pretty grim way, this one felt especially happy about its darkness. That makes the ending even more chilling, following a good tension building and creepy build towards it. Another holiday-themed anthology horror movie isn’t what anyone was asking for, but that doesn’t mean Holiday Hell comes without merit. Each short offers something in terms of enjoyment, even if some aren’t as good as the others.

The short with the evil rabbi toy stands out as one of the better ones, solely for the fact it feels like a scene in the next Puppet Master movie. There’s a campy quality to it, but still chilling somehow — also, excellent design work on the toy as it’s genuinely pretty creepy.

Based on my enjoyment on the main story and The Hand that Rocks the Dreidel, I’d say director Jeff Ferrell stole the show and would love to see what else he has to offer in the world of horror.