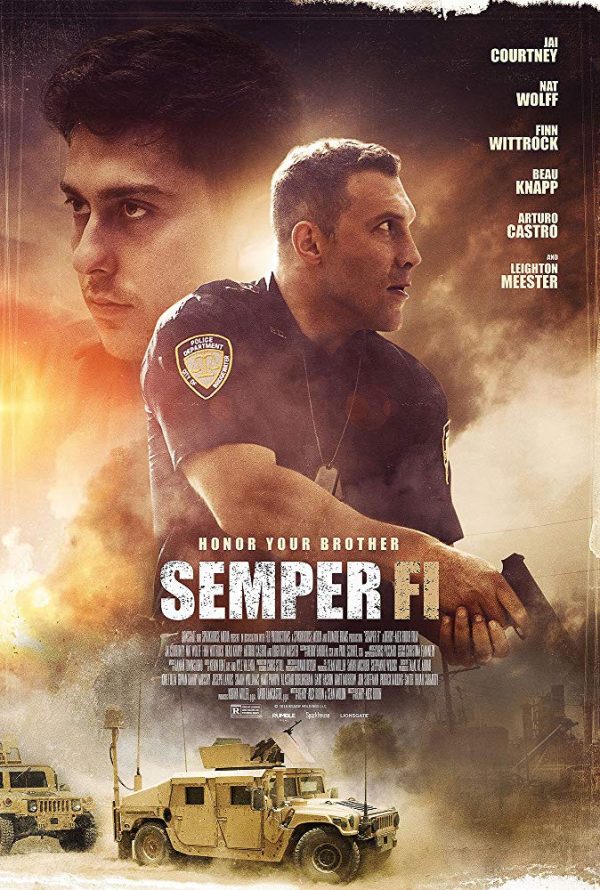 A police officer who serves in the Marine Corps Reserves is faced with an ethical dilemma when it comes to helping his brother in prison.

Allow me to clarify one thing before speaking, as this review for Semper Fi will be somewhat rushed (it’s an awful movie that I really don’t want to spend any more time contemplating): I respect the US military. That doesn’t change the fact that every jarhead here is insufferably macho, belligerent, reckless, boneheaded, and downright unlikable; it’s something not even prison guard corruption or brief glances at the horror of the Iraq war can salvage. Fuck every single character in this movie, just as much as the overbearing orchestral music indulging for nearly 3 minutes during the climax, as if anyone here should be considered a hero or worth celebrating.

Callahan and Oyster (the miscalculated combination of bland Jai Courtney and Nat Wolff, who succeeds so strongly at making one hate his personality that even when the film flips the script and tries to generate sympathy for him, it’s impossible to give a damn) are more than biological brothers; Callahan is also the legal guardian of his sibling (don’t even get me started on the throw away garbage the narrative conveniently invents and forgets about regarding how this came to be). When he’s not serving on active duty, Callahan is also a police officer. Generally, he has his life in order compared to his delinquent younger brother that is headed to prison following one more future mishap.

Director Henry-Alex Rubin (also co-writing the script alongside Sean Mullin) has one juxtaposition that is initially promising; deep in combat, Callahan murders a seemingly harmless civilian that could have posed a threat. Eight months prior to that, Oyster accidentally killed someone during a drunken bar fight in the restroom. One of them is sent to jail, the other got your hero’s welcome upon returning (as did the rest of Callahan’s squad, which is made up of interchangeable faces that are nothing more than generic soldiers). Instead of leaning into that and commenting on the nature of murder itself, or even just exploiting that plot point, Semper Fi increasingly gets ridiculous until the point of no return.

It’s not long after visiting Oyster in prison before Callahan realizes something needs to be done and that the system is corrupt. He also feels guilty for getting his brother locked away in the first place when he could have done the morally wrong (but the right thing to him) thing and helped him get away with murder. Such things cause Callahan to go increasingly violent and crazy, and disturbingly Semper Fi glorifies this behavior. Shockingly, even Joker (which releases the same day) has more restraint for doing such a thing, so look in that direction if you fancy watching a movie about someone becoming violently unhinged. These people only have their own life choices to blame for the unfortunate predicaments, and they deserve no sympathy or empathy from anyone.